Vieques, Puerto Rico: A people’s right to human dignity – US Navy out!

Given the participation of Canada in the militarization of the Caribbean and its participation in sea-to-shore bombing exercises in Puerto Rico (code-named Caribops), using for one period DU shells from the Phalanx artillery system, we are reproducing the following item on the resistance being waged by the islanders and the role of the U.S. Navy in attacking their just struggle. – TS 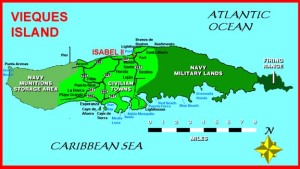 (June 2, 2001) – ON May 25, students at the University of Windsor attended a presentation by Dr. Luis Nieves Falcon, Chair of the Puerto Rico Human Rights Committee. The Windsor Peace Committee organized the visit to assist in the work to end the marginalization of the struggle of the Puerto Rican people. Dr. Nieves Falcon spoke of the courageous struggle of the people of the small island of Puerto Rico against United States domination. He described how for over 500 years the Puerto Rican people have fought against imperialist and colonial enslavement, first at the hands of the Spanish and now under the US imperialists. He presented a historical outline of how the Puerto Rican people have continued to defend their dignity and fight for their national liberation.

In the evening, Dr. Nieves Falcon addressed members of the Windsor Community at a packed meeting in CAW Local 195 Hall. He described how the Puerto Rico Human Rights Committee carried out tireless amounts of work to involve the entire Puerto Rican population in taking a stand against the inhumane treatment of Puerto Rican political prisoners. He pointed out that the key to success was the setting of the work to involve everyone in Puerto Rico, regardless of their ideological persuasion, in taking a stand against the brutal persecution of Puerto Rican patriots whose only crime was standing up for their right to decide the future of their homeland. He also described how this method of work was used to involve the people in demanding that not one more bomb be dropped on the island municipality of Vieques located off the coast of Puerto Rico.

Like the island of Puerto Rico itself, Vieques was taken over by the United States and turned into a bombing range for the training of mainly US but also Canadian and other troops in preparation for war adventures around the world. As recently as April 1, the people of Vieques joined by many Puerto Ricans from the main island carried out civil disobedience, placing themselves as human shields in the bombing range to demand an end to the bombing and that the Navy leave. As a result of the massive international pressure and the civil disobedience the bombing was halted. But the Navy has announced that it will resume bombing in early July. Dr. Nieves Falcon said that the people of Vieques have promised to have 1000 people carrying out civil disobedience in the bombing area if they begin exercises.