HALIFAX (19 January 2003) – ON JANUARY 18, over 2,000 Haligonians demonstrated in -6 degrees Celsius to join the millions of people in action worldwide to say NO to a war on Iraq. The Global Day of Action was held on the occasion of the 12th anniversary of the first Gulf War. Two days before, on January 16, 2003, protests were also held worldwide, including in Turkey, Egypt, Pakistan, Japan, Belgium, the Netherlands, Argentina, and the United States, where Americans attended a rally in Washington, D.C. On January 18, anti-war demonstrations took place in villages, towns, and cities around the world, including Tokyo, Moscow, Paris, London, Dublin, Montreal, Ottawa, Toronto, Edmonton, Calgary, Vancouver, Cologne, Bonn, Gothenburg, Florence, Oslo, Rotterdam, Istanbul and Cairo. 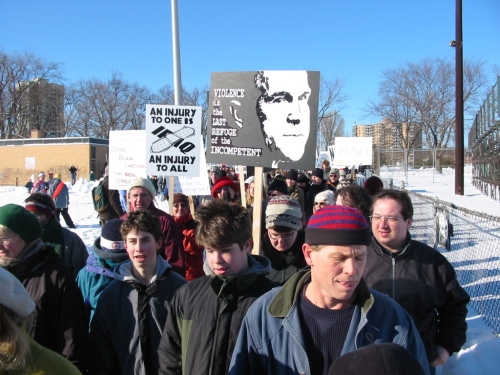 The Halifax demonstration was the largest anti-war demonstration ever held in this strategic port city, the headquarters of Maritime Command, and over twice the size as the January, 1990 demonstration of 1,200 people against the launching of the Persian Gulf War. People from political, social, cultural and religious organizations expressed their opposition to the war preparations made by the US government and demanded that the Canadian government stand for peace and not participate in the plans of the US government to attack Iraq, whether it is with the approval of the UN or not.

Demonstrators were of all ages and included workers, youth, students, seniors, families, artists and teachers, but the main core was the youth and students.

The turnout was such that there was standing room only at the ensuing rally at Queen Elizabeth High School, whose auditorium seats some 1,200 people.

There was a strong turnout from the Arab and Muslim communities of Halifax. Flags from Palestine, Iraq, Cuba, the Democratic People’s Republic of Korea, and Canada could be seen floating above the crowd.

One prominent banner of the People’s Front/Halifax proclaimed “No Harbour for War!” and many people took up the slogans “No to Bush’s War!”, “No Halifax Harbour for War!”, “Down with US imperialism”, “Time for an Anti-War government!”, “End the Sanctions, Stop the Killing!”, “No War, No Poverty”, “End the Occupation of Palestine”, etc.

No Harbour for war banner

Many of those I spoke with were frankly dubious about relying on the Canadian government as a factor for peace, rejecting calls from some personalities to go home and contact their MP as the be-all and end-all of the day. One of them was Kevin Corkill, a young worker, who marched with his wife and child in a stroller.

“Like the thousands of youth who participated around the world I wanted to declare that any war or threats made by the US and backed by our respective governments will not be and are Not In My Name!

“I am concerned, as many youth are, to do something to organize to bring about real change. I am not interested in changing the minds of Bush, Blair or Chretien for that matter or convince them to do away with their evil ways. I am interested in organizing to form an anti-war government.

“If we were to form such a government what would it be like? What would be different? Certainly, there wouldn’t be any speculation over whether Canada will follow the renegade US in its warmongering and mission to have everyone come under their dictate. No! I think it would be quite different. No more decisions made behind closed doors. No more decisions made to appease the warmongers. No more crimes against the peace! Let’s organize for an anti-war government! Count me in!”

On this occasion, the People’s Front-Halifax relaunched its newsbulletin Halifax People’s Voice, which appeared regularly through the 1980s. The six-page-bulletin highlighted the Canada for Peace Petition Campaign, announced the launching of weekly political forums to be held every Wednesday until mid-April on the theme “Peace and Nations in the 21st Century: Understanding the Causes of War” and opposed the concrete war preparations taking place in Halifax, whose harbour is a strategic U.S. and NATO port.

Throughout Nova Scotia, actions – from demonstrations to vigils – were held in Truro, Antigonish, Shelburne, Digby, Annapolis Royal and Wolfville. In many of these communities these actions were the first such initiative, belying the so-called “conservative” image of the Maritimes.

And in Fredericton, New Brunswick, another city in the Maritimes with an important military base (CFB Gagetwon), a vigorous demonstration. A participant reported on Indymedia, “An inspiring day, with a huge crowd of around 1,000 (at the peak) coming out to show solidarity for the global peace movement, and to loudly condemn the brutal war on the people of Iraq and any proposed further war and US imperialism. A giant (and menacing) George W. puppet, drummers and Raging Grannies added to a great atmosphere.

“Today was a day to remember in Fredericton. This is a place that is called complacent by some. It’s often referred to as rather conservative. Today was a different story. There was a level of energy that this city has not seen before when it comes to speaking for the voice for peace — and speaking defiantly against the war machine. Around here, rallies/demos for social justice of around 40 or 50 people are usually considered big, but today’s crowd of approximately 1,000 (at the peak) was a whole new level for our community. People who have been living here for a long time said they’ve never seen anything like it here before.”

It is estimated that over one million people demonstrated in Canada and the United States alone.

THERE WILL BE A VIGIL TO OPPOSE WAR IN IRAQ EVERY MONDAY AT 12:30 PM IN FRONT OF THE BRIDGEWATER, NS POST OFFICE.

The first vigil will be Monday, January 27.

After the successful marches and rallies across Canada we want to keep this protest visible.

Please join us if you can.

On Tuesday, February 4, from 12:00 noon to 1:00 p.m., the New Glasgow Library Program Room will host Dr. David Swan of the University of Calgary as he speaks on the conditions he experienced in Iraq while compiling a report for Physicians For Global Survival. Sponsored by Women For Peace, this event is for anyone concerned about current global conditions and the United State’s pending war on Iraq.

On Wednesday, February 5, two important forums are being held in Halifax. Gary Zatzman, journalist and historian, will give a paper on Canada and the United Nations to the Halifax Political Forums held every week at Dalhousie University from January to May on the theme “Peace & Nations in the 21st Century: Understanding the Causes of War.” On the same evening, Dr. David Swan of the University of Calgary sponsored by the Inter-University Coalition Against the War speaks on the conditions he experienced in Iraq while compiling a report for Physicians For Global Survival in the FASS Building at Dalhousie. In order to accommodate those interested in both topics and in accord with the principle of unity in action, the Forum will begin a half hour earlier so that participants may proceed to Dr Swan’s presentation being given directly across University Avenue.