THE Halifax Political Forums inaugurated its series of weekly public discussion on January 29 on the topic “Why Iraq? Oil? Weapons of Mass Destruction? U.S. Dictate?” The Series is organized on the overall theme, “Peace & Nations in the 21st Century: Understanding the Causes of War.”

“An estimated 200 million people died in two world wars and 500 regional wars in the 20th century alone,” said Tony Seed, editor and publisher of Shunpiking magazine, pincipal sponsor of the weekly series, as he inaugurated the forum on behalf of its steering committee.

“Yet today mankind is faced with new destructive conflicts and deepening economic and political crises. Who is responsible for the threats to global and regional peace? Is it really ‘outlaw regimes’, an ‘axis of evil’ or ‘failed states’ and nations? How can a genuine and lasting peace be achieved? Who will decide?

“This in-depth public series is aimed at meeting the widespread demand for analysis of the contemporary situation, combating the massive disinformation about the nature and causes of war, and to provide clarity and a weekly venue for discussion.

“For a long time, especially since 9-11, we have needed such a public venue where we have the opportunity to meet on a regular basis. These Forums are a converging point for all those concerned with questions of peace, war and nation-building. The concern about impending war is very great. If the topics and speakers sincerely address the underlying issues, this series will become a very serious forum of discussion, and contribute and strengthen the desire of Canadians for a Canada that is a force for peace and justice in the world.”

The Forums, he added, “are a joint effort. To date, four organizations have come together as sponsors, with a steering committing leading the process. This initiative fills an important gap. It is a non-partisan issue and we have a non-partisan approach.” The series will run until April. The first six lectures have been announced, with new topics to be added according to questions and decisions coming out of the discussions. 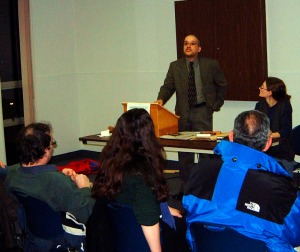 The inaugural lecture was given by Professor Isaac Saney (click here for complete text), on faculty of Dalhousie and St. Mary’s University. One hundred and three people attended, filling the room to overflowing. The interest was such that 35 people stayed for full three hours afterward, discussing many facets of the question.

In a detailed presentation Professor Saney refuted the various fallacious pretexts that the U.S. has manufactured to justify its impending criminal aggression against Iraq.

In dealing with the question of oil, he pointed out that while it is a crucial factor behind the U.S. drive to war, oil “by itself it is not sufficient to explain why the U.S. is so intent on waging war.” Oil must viewed “within the larger context of the clash of the aims and interests of the great powers in the geo-political arena, as an integral part of the overall U.S. strategy for global hegemony, for world supremacy.” Thus, “what is at stake is not simply a massive gorging on oil profits by American oil monopolies: a war to fill the coffers of the oil giants” but a “U.S. rush to ensure its hegemony at the expense of its rivals, particularly the European Union.” Therefore the slogan “NO BLOOD FOR OIL” – while well meaning – is misleading and deceptive as it obscures “the true nature of the danger that looms, the calamity that hangs over the globe.”

He further pointed out that the road that the U.S. has embarked upon can “guarantee nothing but a string of one war after another.” Indeed, the growing and maturing great power tensions, evidenced in the emerging differences and frictions between the EU and the U.S., “portend a planetary conflagration.” He further emphasized that the great powers are unable, by themselves, “to avoid resorting to the use of force, threat of war and actual war to settle their differences. The abolition of war necessitates the abolition of the imperialist system.” As a first step, people must stay the hand of the great powers and our own government from conciliating with the U.S. war preparations, whether through the UN Security Council or without.

In closing, he emphatically stated that the cause of genuine peace can only be realized by the struggles of the peoples of the world who “by going into motion and fighting for a just and peaceful world can show that another world is possible.” At this time, the “main clash that will determine the future of humanity: on one hand, the aim of imperialism to entrench and deepen its global domination in all spheres and, on the other, the aim of the world’s peoples to harmonize and humanize the natural and social environments.”

He called for all concerned to actively demonstrate with millions of others on February 15 against Bush’s war. The main banner in the forum proclaimed, No Harbour for War.

Many participants said this initiative was something they had been talking about doing for a long time. Several new topics and speakers have been proposed. Student members of Dal Peace and Justice started popularizing it the following evening to their fellow students at a film showing of the hard-hitting documentary The Hidden Wars of the Gulf War.

South Shore activists are now planning to launch a film-and-discussion series in their communities.

CBC Information Morning devoted a ten-minute profile to the Forum, which was also reported by ATV.

“Peace & Nations in the 21st Century: Understanding the Causes of War”

This Week – Canada and the United Nations

“Members shall refrain in their international relations from the threat or use of force against the territorial integrity or political independence of any state, or in any other manner inconsistent with the Purposes of the United Nations.” (UN Charter, Article 2.4) The UN Security Council has been politicized by the agenda of the great powers. Should it bow to the U.S. demand for war on Iraq, it will violate the UN Charter. Will Canada use this opportunity to champion the UN Charter? What is Canada’s track record? Who will decide Canada’s role?

One response to “Halifax Political Forums inaugurated, hall packed for ‘Why Iraq?’ lecture”