Over thirteen million people demonstrated worldwide in over 800 cities, including hundreds of thousands throughout Canada in freezing temperatures, against the invasion of Iraq – the largest protest in human history. It demonstrated in the most graphic terms what the people of the world have been saying, that these wars are not in their name and that another world without war is possible. It placed at the centre of the political life of this movement and of the country the demand for an end to pro-war government and for an anti-war government.

THROUGHOUT ATLANTIC CANADA, thousands of people marched on February 15 declaring loudly in one community after another – fifteen in all – No to Bush’s war and any Canadian involvement. Workers, women, seniors, youth and students, political personalities, trade union representatives, political and social activists and people from all walks of life including many families and children, poured into the streets as part of the Global Day of Action involving millions of people worldwide against the war of aggression the U.S. is planning against Iraq.

The overall sentiment was that it is time to draw a line in the sand as far as Canada is concerned. Indeed, right in front of our eyes, right in the harbour, where the HMCS Iroquois of Maritime Command is being frenziedly readied for deployment to the Persian Gulf as the command vessel for an expanded U.S. naval and blockade zone, we can see how the Canadian government, arrogantly defying the public opinion of the Canadian people, is actively preparing for imperialist war.

Over 1,500 people marched through the city’s centre, carrying placards and banners proclaiming, No Harbour for War!, No War in Our Name!, No to War Against Iraq!, Uphold the UN Charter!, and Build an Anti-War Government!

One of the most striking and beautiful banners – by members of Teachers for Peace and Social Justice – was a rendering of “Guernica,” the famous painting by Pablo Picasso now in the UN Security Council. It had been shamelessly covered over during the presentation to the UN of the so-called dossier of U.S. Secretary of State Gen. Colin Powell on February 3rd. Palestinian and Mi’kmaq Warrior flags were also prominent. 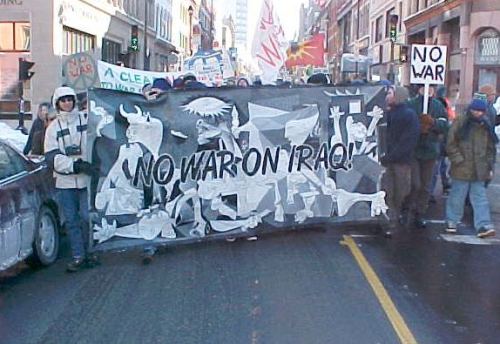 Many people signed the Canada for Peace Petition until pens literally froze, and took copies for their schools, workplaces and neighbourhoods, as well as copies of the February 15 edition of Halifax People’s Voice, the newsletter of the People’s Front/Halifax. People said no to any conciliation by the Chrétien Liberals with Washington.

One of the important features of the February 15 Global Days of Action against Bush’s war and of the demonstrations held across the region and across Canada was the increased presence of Canadian workers from all sectors of the economy. Not only have an increasing number of union centrals, labour councils and locals resolved to oppose the war but an increasing number of workers are actively organizing their fellow workers to take stands.

The depth of people’s sentiment was manifest the length and breadth of Atlantic Canada, from Yarmouth, a small seaside town of 6,500 people in southwestern Nova Scotia, to historic St. John’s in Newfoundland.

In Lunenburg, 50 people demonstrated – or eight per cent of the town – at the government post office. People along the South Shore took chartered buses to the main demonstration in Halifax.

In Antigonish, 400 people demonstrated, or five per cent of the town’s population of 6,000, which includes the faculty and student enrolment at St. Francis Xavier University. This number was an increase of 25 per cent from the January 18 demonstration, part of the Global Day of Action in January. Assembling at the post office in the bitter cold, the rally took over the main street for a spirited march several blocks to St. James’ United Church. All traffic was diverted by the organizers with many drivers honking their horns in support. The marchers were greeted with applause as they came into the church hall and they, in turn, cheered those arriving behind them. One out of every five participants signed the Canada for Peace Petition at the People’s Front literature table.

Prof. Isaac Saney (pictured), who spoke of behalf of the People’s Front, was greeted with pronounced applause for his analysis of the U.S. imperialist aims in Iraq and the Middle East, for his rousing call to build the anti-war movement by setting into motion the work to organize an anti-war government and later on, in a second speech, on the right of the Palestinian people, along with the Iraqi people, to self-determination.

In Sydney, Cape Breton Island, 150 people marched through -40 degree weather demanding an immediate end to the war threat from the Sydney Shopping Centre to the Steelworkers Hall where a brief rally was held. Peace Quest Cape Breton has sent a “Petition Against War in Iraq” to the office of Bill Graham, Canada’s Minister for Foreign Affairs, for which it gathered over 2,000 signatures in just under three weeks. The petition expresses “complete and determined opposition to war in Iraq as an unnecessary, unjustified and immoral act of aggression threatening the peace and stability of the region and the world.”

One of the more poignant actions was held by a youth collective in Bay St. Lawrence on the northernmost tip of Cape Breton Island. Throughout the week they held an anti-war art show in a local hall featuring artistic work they had downloaded and reproduced from the Internet. Then on Saturday they held a public manifestation in the Siberian cold in front of the local Co-op store. 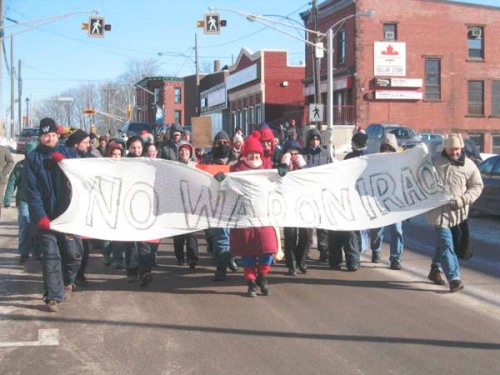 Marches, vigils and other actions were also held in Annapolis Royal, Liverpool, Wolfville and Truro in Nova Scotia; in the Sackville/Tantramar region, Moncton, Saint John and Fredericton in New Brunswick; St John’s in Newfoundland; and Charlottetown in Prince Edward Island, where anti-war activists have launched a campaign against the use of PEI for U.S. military refuelling and training.

In Moncton the demonstration of 700 doubled to 1,400 when it reached the downtown City Market and moved indoors. Sixty of those impassioned demonstrators showed their dedication to the cause by marching through the brutal winter wind from the Université de Moncton campus’ Taillon building on their way to the downtown hall. Memramcook native Bobby LeBlanc, 19, who joined fellow UdeM students on the frigid trek, said the cold was the last thing on his mind. “It wasn’t that bad,” he said, “when you’re all together and you feel the warmth of the cause when you’re motivated and united.” And in Fredericton, where anti war activists have been protesting against urban warfare exercises by the 2nd Royal Canadian Regiment, over 500 people marched in the province’s capital.

From one end of the country to the other, Canadians united to express their determination to make sure that the voice of the people is heard loud and clear. From coast to coast to coast the message was that Canada is against this war; the people say NO! This is the message which must prevail over government attempts to conciliate with the war under one pretext or another. 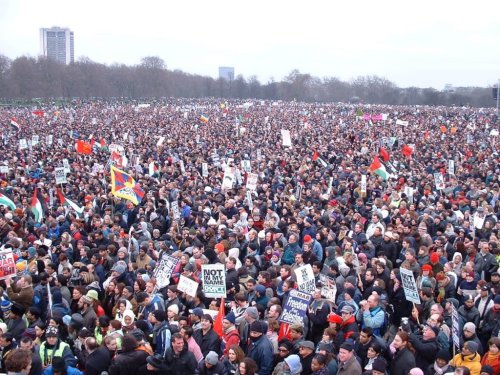 Protests occurred among others in the United Kingdom, Italy, Spain, Germany, Switzerland, Republic of Ireland, the United States, Canada, Australia, South Africa, Syria, India, Russia, South Korea, Japan, and even McMurdo Station in Antarctica. Perhaps the largest demonstration this day occurred in London (pictured), where over two million protestors gathering in Hyde Park and demonstrated through the streets of London. A large demonstration, attended by perhaps around a million Spaniards, took place in Barcelona

One response to “Atlantic Canada marches against Bush’s war (II)”