Part Two of a two-part series. For Part One please visit here. 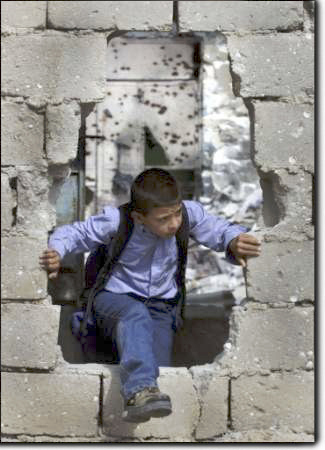 HALIFAX (10 October 2003) – ON 8 SEPTEMBER 2003 the Anglo-American human rights organization Amnesty International (AI), not known for its criticism of Israel over the past thirty years, issued a detailed report entitled “Israel and the Occupied Territories Surviving under siege: The impact of movement restrictions on the right to work.” The 69-page report provides extensive documentation of the deepening of the severe economic and social crisis affecting every sphere of life. Unemployment has soared to over 50 per cent. More than half of the Palestinian population is now living below the poverty line. (1)

According to the International Labour Office (ILO), “The severe restriction on movements of persons and goods within the Occupied Territories and between these and Israel have resulted in a dramatic decline in consumption, income and employment levels, and unprecedented contraction of economic activity.” (2)

A report issued by the World Bank in May 2003 states, “By the end of 2002 Real Gross National Income (GNI) had shrunk by 38 per cent from its 1999 level … Overall GNI losses reached US$5.2 billion after 27 months of intifada …The proximate cause of the Palestinian economic crisis is closure.” (“Twenty-seven Months — Intifada, Closures and Palestinian Economic Crisis: An assessment”, World Bank) (3)

The report contends that the widespread and prolonged closures, curfews and other restrictions on movement currently imposed cannot be justified on security grounds, and discriminate against Palestinians, and are often used as a form of collective punishment in reprisal for attacks committed by Palestinian armed groups.

The Gaza Strip, the most heavily populated region in the world, is 50 km in length and 3 to 10 km in width – the distance from Dartmouth to Chezzetcook on Nova Scotia’s Eastern Shore.

Here is the story of the Gaza fishermen, excerpted from the Amnesty International report. 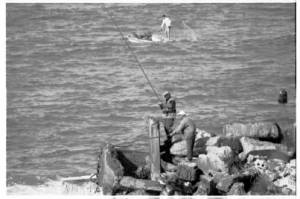 AT THE BEGINNING OF 2001, 2,543 fishermen were registered in the Gaza Strip, working from the port in Gaza city and the wharves in Deir al-Balah, Khan Younes and Rafah. Since 1994, the Oslo Agreement has restricted fishing by Palestinians to a relatively small area, known as Zone L, extending up to 20 nautical miles from the shore of the Gaza Strip. It is policed by Israeli naval patrols.

The sea has been completely or partially closed to fishermen since the beginning of the Intifada. For most of this period, there has been a ban on fishing off al-Mawasi Rafah and al-Mawasi Khan Younes in the southern Gaza Strip.

From 12 May 2002 fishermen from Khan Younes and Rafah have been prohibited from fishing off the coast, and from 1 July 2002 the same applied to fishermen from Deir al-Balah and Gaza. Fishing has been allowed up to 12 miles, normally limited to six miles, off the central and northern coast for most of this period. At some times, such as between 15 February and 16 March 2001, fishing was completely prohibited throughout the Gaza Strip

About 1,000 fishermen are registered to fish from Khan Younes and Rafah. Many of them live outside al-Mawasi and have been prohibited from entering the area completely since its closure in May 2002. Some living in Khan Younes refugee camp told Amnesty International that, even if they were not allowed to fish, they wanted to retrieve valuable equipment stored in the area, such as motors and nets.

On 9 January 2002, the IDF had confiscated at least 20 motors belonging to fishermen in Rafah, and on 18 February, the IDF reportedly broke into buildings used by fishermen in al-Mawasi Khan Younes and broke 10 more motors. The average cost for replacing such motors is about NIS16,000 (about US$3,200).

Since the start of the Intifada, harassment and detention of Palestinian fishermen by the Israeli navy has increased. Fishermen told Amnesty International’s delegate that the navy fired in the air and sprayed their boats with high-powered water jets. Dozens of fishermen have been detained and accused of fishing in a prohibited area, and in some cases reported being ill-treated. Many said they were questioned by Israel’s General Security Service about the activities of the Palestinian Naval Police and a boat belonging to the Palestinian Authority, suggesting that the real motive for at least some of these arrests was to gather information on the Palestinian Authority’s activities in the Gaza Strip.

At about 4.15pm, they were about three to four kilometres from the shore, in an area where fishing was permitted. An Israeli navy patrol boat approached them and officials demanded their permits and ordered them to take up their nets.

The Palestinians complied. After about an hour, officials told the Palestinian crew to follow their boat and led them westwards for about two kilometres.

At that point, Muhammad al-Hissi stopped his boat, as he feared being led into a prohibited area and accused of fishing there. The patrol boat then fired towards the boat and sprayed it with a high-powered hose for about one hour, breaking windows in the cabin. Muhammad al-Hissi was ordered to strip and swim over to the patrol boat. There he was handcuffed with his hands behind him, blindfolded and forced to crouch. Other members of the crew were brought to the patrol boat, which returned to Ashdod port in Israel, towing the Palestinian boat.

After being medically examined at the port at about 1.15am, they were blindfolded and handcuffed again, then driven for between one and one-and-a-half hours on a bus, still stripped down to their vests and shorts, and extremely cold.

After arrival at a building, they were interrogated. An interrogator, with two policemen present, accused Muhammad al-Hissi of being in a prohibited area, an accusation he denied, and asked him to sign a statement written in Hebrew, which he did. The five men were then taken to Erez detention centre. They arrived at about 6pm, still wearing only their shorts and vests, and were medically examined again.

On 10 September, they were brought to court to face charges of fishing in a prohibited area but the charges were withdrawn and they were released The Israeli navy returned their boat 16 days later, and the PA held the boat for another nine days before releasing it.

Equipment worth about NIS4,000 (about US$800) was missing, and Muhammad al-Hissi lost all his income for every day that he could not go out to sea.

Closures at sea have seriously damaged the Gaza Strip’s fishing industry and dependent businesses, such as mechanics’ shops and wholesale merchants.

Fishermen in Rafah and Khan Younes have completely lost their livelihoods, and some in Deir al-Balah and Gaza city are not working or are operating at a loss because they can catch so little in the narrow area where they are allowed to fish. They have also suffered direct losses from damage or seizure of their property by the IDF and loss of income during periods of detention or when boats were confiscated.

HISHAM KHALED BAKR, 34, lives in Gaza City and is responsible for his wife, two children, his mother and unemployed brother. With three partners, he fishes for oily fish such as sardines and tuna in the most profitable seasons during April and May and September and October.

Before the intifada, each crew member would earn about NIS1,000 (about US$200) each season. Because of the drop in the catch, the partners cut the crew’s wages to NIS600 (about US$120) in the last three seasons. The boat did not go out in the second season of 2002 as the crew had left to look for better-paid work.

Hisham Bakr also used to have a business in Gaza, making and selling clothes. In the early days of the intifada, the market for Gaza-made clothes collapsed because many Palestinians lost their sources of income and switched to buying cheaper clothes imported from China. He gave up this work and has no source of income.

(3) The Intifada is named after the al-Aqsa Mosque in Jerusalem where the killing of Palestinians in September 2000 protesting against a provocative “visit” by Ariel Sharon and 1,000 soldiers triggered the uprising. It is more truly seen as a protest against the restrictions of movement which were harming individual Palestinians and holding back economic development, and for national self-determination.

Part Two of a two-part series. For Part One please visit here.

One response to “The fishermen of Palestine: AI report indicts Israel”