George W Bush ‘visit’ – Why give a warm greeting to someone who used 9/11 as a pretext for illegal war?

HALIFAX (2 December 2004) – I WONDER if George Bush Jr. knows how much he’s done for the Halifax Peace Coalition. Instead of a handful of people holding vigils to protest against the war in Iraq, thousands took to the streets when Bush blew into town this week. One group of protesters pushed a 1989 Buick Century to Cornwallis Park just before Bush was scheduled to speak at nearby Pier 21. A yellow plywood “Smush Bush” sign was fastened like a plough over the front bumper. Twenty-three year old Fenn Martin, who steered the Smushmobile, said he was just trying to show that Halifax did not welcome the American Commander-in-Chief. “We do not support his actions. I think he’s a terrorist and a war criminal,” the NSCAD student declared. “This is my plough. We’re going to plough him right out of here.”

The so-called War on Terror is an obsession with Bush, yet Wright argued terrorism is a small threat compared with hunger, disease or climate change. He pointed out that 25,000 people die every day from contaminated water while every year, 20 million children suffer mental impairment because of malnourishment. 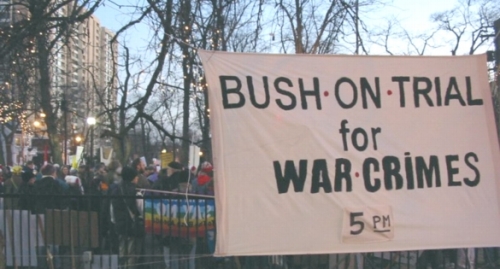 The protest march took place the day after members of the Peace Coalition found Bush guilty of war crimes during a mock trial. Of course, Bush could not be tried for real in Canada. As long as he’s in office, he enjoys diplomatic immunity. But as the mock trial showed, there are ample grounds for charging him under Canada’s Crimes Against Humanity and War Crimes Act. Those grounds include Bush’s invasion of Iraq in defiance of international law and the UN Charter, the slaughter of tens of thousands of Iraqi citizens and the inhumane and degrading treatment of Iraqi prisoners.

Before Bush came to Halifax, the local media were full of inane quotes. Fisheries minister Geoff Regan called the visit a nice gesture. Premier John Hamm declared it would give us a chance to re-establish a firm friendship with Americans and mayor Peter Kelly hoped it would help Halifax raise its international profile. One columnist predicted we’d be so dazzled by Bush’s celebrity that we’d give him a warm welcome. Another advised us to open our arms. After all, the Pretzel Prez was here to thank us for our hospitality to American travellers when 9/11 shut down the skies. But I’m with Fenn Martin. Why give a warm greeting to someone who used 9/11 as a pretext for illegal war?

I wonder if George Bush Jr. has the faintest idea how much he’s helping the environmental movement raise alarms about the future of the planet. Bush refused to sign the Kyoto Accord on global warming. He rejected mandatory controls on greenhouse gas emissions. He opposed conserving oil and gas, calling instead for more drilling. He gutted environmental regulations. Last year, the New York Times reported that environmental organizations regularly denounce Bush’s actions as the biggest setback in a generation.

In the CBC Massey Lectures broadcast last week, historian Ronald Wright warned that economic policies like Bush’s have set us on a suicide course. “We’re logging everywhere, fishing everywhere, irrigating everywhere, building everywhere and no corner of the biosphere escapes our hemorrhage of waste.”

The so-called War on Terror is an obsession with Bush, yet Wright argued terrorism is a small threat compared with hunger, disease or climate change. He pointed out that 25,000 people die every day from contaminated water while every year, 20 million children suffer mental impairment because of malnourishment. Wright added the UN calculates we could provide clean water and other basic needs for the world’s poorest for a fraction of the cost of Bush’s “fantasy of a missile shield that won’t work, isn’t needed, yet could provoke a new arms race and the militarization of space.”

Yes, George Bush’s policies are opening people’s eyes to the folly of an economic system based on greed, war and plunder. Yet, it’s hard to be grateful to the reckless Bush. Sarah Wilbur, who was helping shove the Smushmobile to Cornwallis Park on Wednesday, said she was demonstrating against the abuse of American power. “Just as the US is pushing its imperialist agenda, we are trying to push Bush out of our city,” she said with a smile. No, George W., you’re definitely not welcome in Halifax.

*Bruce Wark is an associate professor of Journalism, University of King’s College School of Journalism and a columnist with The Coast, a Halifax weekly.