What is Canada really doing in Haiti?

The “Ottawa Initiative on Haiti”: Humanist Peacekeeping or racist imperialism?

(April, 2009) – ON Sussex Drive in Ottawa, just a few steps away from the enormous US embassy, stands the Peacekeeping Monument. The structure titled “Reconciliation” was erected to honour the more than 125,000 Canadians who have served in United Nations peacekeeping forces since 1947. The current article documents one particular instance – the February 2004 intervention in Haiti – where the historical record conflicts with the “good peacekeeper” narrative communicated by the Canadian government, reiterated by the corporate media, and represented by “Reconciliation.” END_OF_DOCUMENT_TOKEN_TO_BE_REPLACED

Filed under Caribbean, No Harbour for War (Halifax)

The Dominion  (April 7) – Canada’s foreign policy, as that country which is closer geographically, economically, and militarily with the US than any other, has long been circumscribed by the whims of the world’s lone Superpower.

Part of the ‘hidden wiring’ of the US-Canada relationship is premised on the belief that there is a role for Canada in places where the US carries a lot of counter-productive baggage. New records obtained by The Dominion show just how actively intertwined Canada’s foreign policy is with the US-led ‘democracy’ promotion project in Venezuela. END_OF_DOCUMENT_TOKEN_TO_BE_REPLACED

The imperial pitbull: NATO and its ‘Strategic Doctrine’ 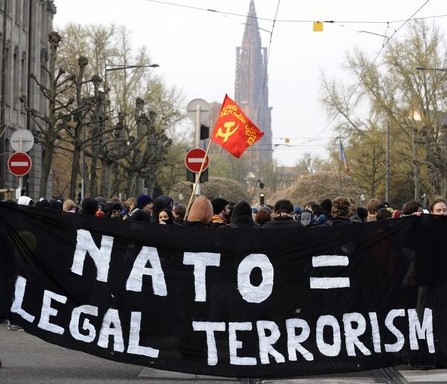 One of the deceptive clichés of Western accounts of post World War II history is that NATO was constructed as a defensive arrangement to block the threat of a Soviet attack on Western Europe. This is false. It is true that Western propaganda played up the Soviet menace, but many key U.S. and Western European statesmen recognized that a Soviet invasion was not a real threat. The Soviet Union had been devastated, and while in possession of a large army it was exhausted and needed time for recuperation. The United States was riding high, the war had revitalized its economy, it suffered no war damage, and it had the atomic bomb in its arsenal, which it had displayed to the Soviet Union by killing a quarter of a million Japanese civilians at Hiroshima and Nagasaki. Hitting the Soviet Union before it recovered or had atomic weapons was discussed in Washington, even if rejected in favour of “containment,” economic warfare, and other forms of destabilization. NSC 68, dated April 1950, while decrying the great Soviet menace, explicitly called for a program of destabilization aimed at regime change in that country, finally achieved in 1991. END_OF_DOCUMENT_TOKEN_TO_BE_REPLACED