Atlantic Gateway: The politics of pragmatism and the elephant in the room

THE Nova Scotia NDP has won unprecedented accolades in the 2009 provincial election from the private and public monopoly media for its “pragmatism” and “measured policies.” Pragmatism worships the absence of principles. If something works in the interests of the status quo, it must be applauded, applied and fought for. The Nova Scotia NDP has taken the vow that “the end justifies the means.”

That end includes the elephant in the room, the “issue” which the cartel of political parties and the private and public media are all united on and have agreed to be silent on during the election. 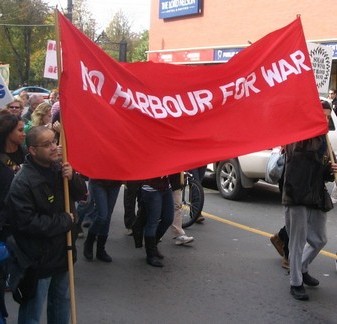 Nova Scotians present their demands. October 25, 2008, opposition to Canada’s criminal role in the occupation of Afghanistan and the militarization of the Port of Halifax, the most heavily militarized city in Canada.

The Atlantic Gateway Project was originally drafted by the Atlantic Institute of Market Studies, set up in 1994 with U.S. funds. It is a well-organized and -financed attempt by capital to privatize pubic services, eliminate national sovereignty and drive down wages. It advocates the creation of a new trans-border economic, transportation, gas and military zone stretching from Halifax and other ports to New England and the Great Lakes based on capturing the trade from Asia, the strategic Persian Gulf and the Suez Canal.

To this end, publicists of the project have also emerged to politically attack the struggle of the Palestinian people and of Iran as “terrorist” in their defence of the Zionist state of Israel, the portal to Asia, and the drive of the U.S. empire to dominate the Middle East. The resistance of the Arabic and Persian peoples to being incorporated into the imperialist system of states blocks their expansionist drive in the same way the resistance of Nova Scotian workers blocks the neoliberal programme of the MacDonald government. It is not fortuitous that Canadian warships have been deployed to the Persian Gulf and the Horn of Africa by Peter MacKay, Minister of National Defence and Minister of the Atlantic Gateway, in the name of the high ideal of chasing down high sea pirates from Somalia.

Nor is it fortuitous that, while the manufacturing sector is being cratered, the NDP has been second to none in its clamour for the construction of the $3-5 billion, state-of-the-art, command-and-control supply warships be built in Halifax and Atlantic Canadian shipyards in the name of “creating jobs” and its endorsement of NATO.

These are all component elements of a project heavily backed by the banks, the Irvings and other molochs from New England and the Maritimes. It is now being funded by the federal Atlantic Canada Opportunities Agency of the Harper Government. 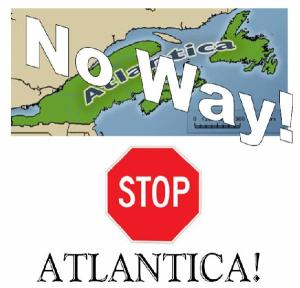 Graphic is from mass protests of trade unions and social groups in 2006 when the scheme was first revealed. The moniker “Atlantic Gateway” has essentially replaced “Atlantica” and the map is no longer displayed.

Since the spring of 2006, the project has been the target of repeated mass protests in the Maritimes by trade unions, environmentalists and activist youth who have raised the popular slogan, “Resist Atlantica!” Since April 2009, young workers and youth have been holding forums and carrying serious discussion on the class nature of the Atlantica project, to work out pro-social emergency measures to confront the capitalist crisis and develop their own human-centred alternative program for nation-building.

The NDP’s “better deal for today’s families” includes, as promised by Darrel Dexter,

“an Atlantic Gateway Council, where the ports, shippers and major customers could develop a gateway strategy to maximize use of Atlantic Canada as a route for imports to and exports from North America. I remain convinced that a stakeholder council is vital, if Atlantic Canada is not to waste time and money on divided efforts while Montreal and others with unity of purpose get the prize. I applaud all those in the business community who are working for an effective and cooperative approach.” (“Address to Halifax Chamber of Commerce on Jobs and Investment,” February 12, 2009)

Map of the sea routes that the Atlantic Gateway is contending for reveals the extent of the global ambitions of the Irving empire and the political and economic elite.

In such a zone, to guarantee maximum speed of the transport of resources, commodities and war materiel in minimum amount of time, all the rights and liberties of the workers will be suspended, as the maritime workers of Halifax and other ports have already experienced under federal transport regulations proclaimed in November 2007 by the Harper government.

Mechanisms such as tripartite “stakeholder councils” involving trade unions, monopoly capital and government is a fascist “one nation” gateway to living hell for the working class, as it leaves the class defenceless in the face of attacks orchestrated by the owners of capital and government. Tripartism in economic and political affairs is based on theories of exceptionalism that no alternative to the crisis-ridden capitalist system is possible. Tripartism advocates “one nation” chauvinism, the union of capital and labour, which does not recognize class divisions in society and the reality that monopoly capital exists by exploiting the working class and negating its rights. Tripartism is meant to weaken the industrial working class including the marine port workers as the backbone of resistance within the U.S. Empire and annexed Canada. A destabilized North American working class movement becomes both a reserve for imperialist war and a target of capitalist plunder. It is meant, as Mr Dexter clearly states, to oppose Quebec and compete for imperialist trade routes on the world scale.

The NDP politics of pragmatism and its tripartite theory of “balance” between “good corporate citizens” such as Michelin with “stakeholder councils” and a “better deal for today’s families” are precisely in the service of an end: corporatist fascism and war.

The impending victory of the NDP’s politics of pragmatism in the June 9 provincial election means that workers must exert every effort to step up the resistance movement against the nefarious plans of the U.S. Empire and its annexed lackeys in Canada. Their aim is to destroy our manufacturing base and organized trade union movement and bring about the annexation of Canada into a Union of North American Monopolies or Fortress America under theories of exceptionalism of corporate governance and the tripartite hoax of “one nation” economics and politics, which claim there is no alternative. The war being waged in the Middle East and Afghanistan by the U.S. and its NATO allies is in the service of these aims. Through our resistance, we can occupy the space for change so that our demands for alternative arrangements which serve our interests can be realized.

8 responses to “Atlantic Gateway: The politics of pragmatism and the elephant in the room”