The scramble for Africa – Berlin Conference to AFRICOM

THE HODGEPODGE of geometric boundaries that today divide Africa into 50 plus irregular nations under Eurocentric subjugation all started in Berlin, Germany on November 15, 1884, writes ITAI MUCHENA*. Today Germany unashamedly hosts the headquarters for the new U.S. African Command (AFRICOM). 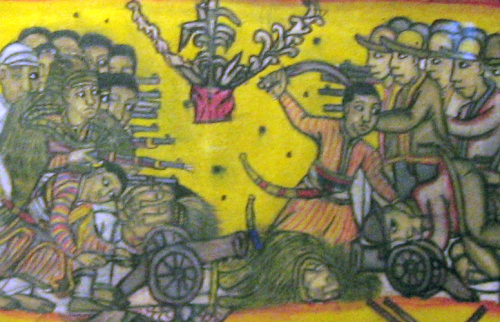 This scene from an Ethiopian tapestry depicts the Ethiopian triumph against Italian forces at the Battle of Adwa. The Italo-Ethiopian War of 1895–1896 distinguished Ethiopia as the only African state to maintain independence in the 19th century with a decisive show of force. (Photo by Joshua Sherurcij)

The infamous Berlin Conference still remains Africa’s greatest undoing in more ways than one, where colonial powers superimposed their domains on the African continent and tore apart the social, political and economic fabric that held the continent together.

By the time independence returned to Africa between 1956 and 1994, the African realm had acquired a colonial legacy of political fragmentation that could neither be eliminated nor made to operate wholly independent from the former colonial masters.

Some Africans had been too much battered, some bruised, some undignified and others brainwashed so much that up to today, Africa is battling to remain united due to continued and uncalled for interference, at every opportunity, by the imperialist hawks.

Today, the same Germany – the womb that gave birth to colonialism – is unashamedly hosting and developing AFRICOM, the United States of America superior military command formed to superintend on America’s milking of African resources, at the expense of not only Africa but other fair dealing countries of the world.

There is no doubt that Germany is seeking re-colonisation of Africa, this time, creating space for its big brother, the United States of America.

The giant military project is not only an affront to African democracy but an insult to African humanism as it seeks to reverse all the gains brought about by independence – from sovereignty to control of natural resources and self governance.

Africa will not forget that in 1884 at the request of Portugal, German chancellor Otto Von Bismarck called together the major western powers of the world to negotiate questions and end confusion over the control of Africa. Africa itself was not invited because Europe believed Africans had no meaningful contribution to make towards shaping their own destiny.

Bismarck saw an opportunity to expand Germany’s sphere of influence over Africa and desired to pitch Germany’s rivals to struggle with one another for territorial integrity. Today, current Chancellor Angela Mickel is playing exactly the same role, pitching America against other economic powers in a battle to control Africa’s strategic natural resources.

Before the Berlin Conference 80 per cent of Africa and its natural resources had remained under traditional and local leadership but thereafter the new map of the continent was superimposed over the one thousand indigenous cultures and regions of Africa. Concurrently, Africa’s wealth – as pronounced by its vast human and natural resource base – was appropriated by the colonisers.

As a result, the new countries lacked and still lack rhyme or reason and divide coherent groups of people and merged together disparate groups that really did not get along.

All in all, 14 countries were represented: Austria-Hungary, Belgium, Denmark, France, Germany, Great Britain, Italy, the Netherlands, Portugal, Russia, Spain, Sweden-Norway (unified from 1814-1905), Turkey, and the United States of America.

France, Germany, Great Britain, and Portugal were the major players in the conference, controlling most of colonial Africa at the time.

At the Berlin Conference the European colonial powers scrambled to gain control over the interior of the continent. The conference lasted until February 26, 1885 – a three-month period where colonial powers haggled over geometric boundaries in the interior of the continent, disregarding the cultural and linguistic boundaries already established by the indigenous African populace.

By 1914, the conference participants had fully divided Africa among themselves into 50 countries. 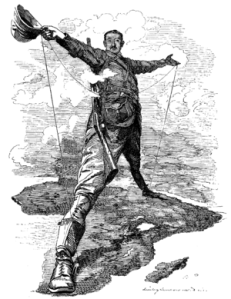 The Rhodes Colossus, a caricature of Cecil Rhodes after announcing plans for a telegraph line from Cape Town to Cairo. For Punch by Edward Linley Sambourne.

France took much of western Africa, from Mauritania to Chad (French West Africa) and Gabon and the Republic of Congo (French Equatorial Africa).

Belgium and King Leopold II controlled the Democratic Republic of Congo (Belgian Congo) while Portugal took Mozambique in the east and Angola in the west.

Today, Africa has stood firm against the hosting of AFRICOM and the same Germany has offered an alternative and will host AFRICOM until 2012, when it is envisaged the US would have found a suitable base in Africa.

SADC in particular and the African Union in general, have said no to this project but the Americans are not resting on their laurels. They are still working out ways of penetrating African governments in order to get a strategic African country to host AFRICOM.

The truth, however, remains that once Africa allows the hosting of AFRICOM, it will have subcontracted all its powers to AFRICOM, to USA and its exploitative military ventures.

After a review of numerous potential locations for the establishment of AFRICOM headquarters, US Defence Secretary Robert Gates has elected to keep the new command in Stuttgart, Germany at least for now, Pentagon officials say.

Until then, AFRICOM’S headquarters will remain in Stuttgart, “the decision has been delayed until US Africa Command has more experience in working with partner nation militaries and thus a better understanding of its long-term operational requirements,” wrote Hibner.

After fierce resistance from Africa, which should continue through experienced leaders like President Mugabe, Hosni Mubarak, Omar al-Bashir, Teodoro Obiang Nguema Mbasogo and new but progressive thinking ones like Jacob Zuma, Bingu waMutharika and Rupiyah Banda, AFRICOM seems to have hit a brick wall on finding an African host.

“We certainly looked at a number of alternatives,” Pentagon spokesman Bryan Whitman said in a news release. “But at the end of the day, it was determined that for now, and into the foreseeable future, the best location was for it to remain in its current headquarters.”

In Stuttgart, AFRICOM officials say the focus now is on building up the new command.

Though it was officially activated on October 1, there has been a steady stream of speculation worldwide about where AFRICOM would eventually set up its headquarters. Potential sites have ranged from Charleston, SC, to Morocco and Monrovia, to other locations in Europe such at Rota, Spain.

“It’s become a phenomenon that the discussion of AFRICOM always hinges on where it’s going. Where we’re going is here (Stuttgart). What’s important for us is to build the command,” said Vince Crawley, AFRICOM spokesman. “Looking for office space stateside is something that is well-intended, but something way down the road.”

But whether the Pentagon’s latest statement on AFRICOM will quell the speculation remains to be seen. For instance, despite repeated statements that the initial plan to place AFRICOM headquarters in Africa was shelved, reports routinely crop up asserting otherwise. The most recent case occurred a couple weeks ago with Moroccan media outlets reporting that a deal was struck for AFRICOM to locate its headquarters in the port city of Tantan.

It will be folly for Africa to think that AFRICOM commanders have rested their case on finding a compliant African country to host them because keeping the new command in Stuttgart will allow it to gain greater operational experience and foster relationships with both African”scramble for afric and European partners.

Once AFRICOM moves to African soil, Africa is doomed and finished. It will have to religiously follow the American exploitation gospel and the founding fathers of the African revolution will turn and wince in their graves from anger and disappointment.

*Itai Muchena is reading politics at Ohio State University, US.