From a leaflet published by the Ad Hoc Committee to Defend Palestine, Halifax, June 9, 2010 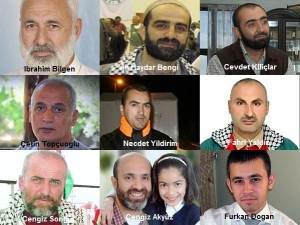 (June 9, 2010) – WE ARE publishing below excerpts of what some of the participants in the humanitarian aid Freedom Flotilla had to say about what took place when the Israeli commandos assaulted the ships on May 31.

Andre Abu-Khalil, Al Jazeera cameraman: “First they [the Israelis] tried to come by helicopter and tried to come down on the main deck. But the Turkish people were gathering on the rooftop and they managed to grab three of the soldiers, which led to a second helicopter to come and start shooting live bullets on the people. People [on board] did not have any guns. All what they had were some wooden sticks which is normal.

“I was on the Mavi Marmara [the lead ship of the flotilla].

“I wasn’t on the rooftop deck. I was on the first deck floor where the Israelis tried to climb by the ropes on the deck.

“There were 20 Turkish resistance guys throwing tomatoes, anything that they managed to throw, on the Israelis.

“Then one of these Turkish guys got a bullet just in the head. When the Turkish people saw that, they pulled him inside when the Israelis started firing on the deck.

“[After the Israelis took over the ship] they kept us tied up, hands behind the back, for nine hours until we reached the Ashdod port and from there they took us for individual interrogation and then shipped us all to Be’er Sheva jail.

“The organizers [of the flotilla] swapped the four Israelis kidnapped, or caught, by the people on the ship, and because they were beaten up, because it’s kind of resistance from our side, we swapped the Israeli soldiers to [get] to treat our injured.”

Mohamed Vall, Al Jazeera reporter: “The Israeli assault took those of us on the ship by complete surprise.

“During that hour and a half in the early morning everybody on board the ship thought that no-one would survive the Israeli attack because we saw about 30 war vessels surrounding this ship and helicopters attacking with very luminous bombs, the sound of them makes you think you are dead.

“That was a fear of war, complete war, on a ship that was full of men, women and even children.

“The first soldiers on the ship were not killed, they were not shot at, they were captured by the defenders of the ship.

“Moments later another bigger helicopter landed more troops and this time they fired immediately at people and killed as many as they could so that they could reach the cabin and take control of the ship.

“I saw blood spilt on the ship and everyone knew that there were no weapons. We all knew the Israelis would intercept us and try to stop us, but we didn’t think that they would open fire at the first moment.

“I have been shown the picture of a Yemeni man, and this is ridiculous, who was on the ship and most people know that every Yemeni in the world has a Yemeni style knife, that is a cultural thing and does not have anything to do with violence.

“I understand now that in Israel they are trying to make a big deal about that, saying that the boat was full of violent people and just because of that one man.”

Othman Battiri, Al Jazeera crew member: “At 4:15, tens of Navy boats carrying tens of soldiers tried to board the ships. They were met by resistance. Peaceful resistance. Helicopters came and tried to download soldiers. They could not.

“At that moment, they started firing live ammunition.

“First, they fired sound and gas bombs and rubber bullets. Some people were injured from the rubber bullets. Then, live bullets were used. I saw several men being wounded. We tried to help some of the wounded. I saw four people who were killed.

“I saw two people die before my eyes. One of them had a bullet in the chest. The other was bleeding but I did not know where he was shot.

“We went down to see the other dead people. One had a bullet in his head as if he was hit by a sniper. Live bullets were every where.

“They did not respect that all those on the ships were civilians. There were no weapons.

“There was not firing by the activists on the soldiers. As media we stand as witnesses on that.

“They four dead people that I saw were all Turkish. Two were old en. The other two were younger. One of the young people was a coordinator in the media room. His name is Juwdat.

“We heard that more people were killed. I only saw four. Most of the fighting took place on the upper level around the room of ship captain, where the activists tried to prevent the soldiers from trying to control the captain’s room. This is where live ammunition was used.

“The attack started at 4:15 and ended around 5:30 when we heard that the ship was controlled by the Israelis.

“Around 7:00 they asked us to leave our rooms and they started tying our hands.”

Hazem Farouq, Egyptian MP: “Helicopters were flying above us. Four military ships and 10 Navy boats surrounded us. They rained [down on] us with sound and gas bombs as if we were in a real war.

“Four people died before my eyes and in my hands. We could not find any first aid material. What happened required a field hospital to treat the injured. I did not have the necessary material to treat their bleeding wounds.

“The wounded were very hurt because they were not carried in the proper way through the stairs and narrow doors.”

Farouq is a dentist who was on board Mavi Marmara, the lead ship of the flotilla. He spoke to Al Jazeera after arriving in Cairo.

Issam Zaatar, Al Jazeera cameraman: “I was filming, and then [an Israeli solider] ran after me with a stun gun.

“He could not catch me. One of his colleagues hit my hand from behind with a stun gun. My camera fell down. He ran to crush the camera with his feet.

“I told him, don’t break my camera. If you want the tapes, I will give them to you. I told him these are media equipment. They had no limits.

“They used rubber bullets. They used tear gas bombs. It was an unbelievable scene.”

Haneen Zubi, Palestinian member of the Knesset: “We were expecting the Israeli army to stop us, to prevent us from entering but surely we didn’t expect such a war against us.

“It was 14 ships which approached us, at nearly 4:30 in the morning. Fourteen ships that I could count and one helicopter. Maybe more than 10 soldiers, I couldn’t say exactly [how many] were getting out of the helicopter.

“On the second floor of the ship there were just passengers who are journalists, a nurse and organizers of the flotilla who didn’t have anything in their hands.

“After 20 minutes, maybe 15 minutes, there were three dead bodies.

“It ended at six, when a voice from the microphone said the ship was controlled by the Israelis, ‘please enter the rooms.’”

Norman Paech, former member of the German parliament: “This was not an act of self-defence [by the Israeli army], but rather it was completely disproportionate — although we were counting on our ship being blocked and maybe checked.

“This was a very serious offence, this was a war crime.

“I personally saw two and a half [foot] wooden sticks which were used [by activists].

“We had not prepared in any way to fight. We didn’t even consider it.

“No violence, no resistance because we knew very well that we would have absolutely no chance against soldiers like this.”

Mihalis Grigoropoulos, Greece: “I was steering the ship, we saw them [Israeli soldiers] capture another ship in front of us, which was the Turkish passenger vessel with more than 500 people on board and heard shots fired. We did not resist at all, we couldn’t even if we had wanted to. What could we have done against the commandos who climbed aboard? The only thing some people tried was to delay them from getting to the bridge, forming a human shield. They were fired upon with plastic bullets and were stunned with electric devices. There was great mistreatment after our arrest. We were essentially hostages, like animals on the ground.

“They wouldn’t let us use the bathroom, wouldn’t give us food or water and they took video of us despite international conventions banning this.”

Nilufer Cetin, Turkey: “We stayed in our cabin and played games amid the sound of gunfire. My son has been nervous since yesterday afternoon … I did not need to protect my son. They knew there was a baby on board. I put a gas mask and life jacket on my son. We did not experience any other problems on board, only a water shortage.

“We took walks on the deck, played games with my son. The curtains were drawn, so I did not see the raid as it was happening. I only heard the voices. There are lightly and heavily wounded people. There are thousands, millions of babies in Gaza. My son and I wanted to play with those babies. We planned to deliver them aid. We wanted to say: ‘Look, it’s a safe place, I came here with my baby-son.’

“I saw my husband from a distance, he looked okay. The ship personnel were not wounded, because [the soldiers] needed them to take the ship to port. I will go again if another ship goes.”

Cetin returned to Istanbul airport with her one-year-old son.

Youssef Benderbal, France: “The instructions were clear. Do not provoke, remain calm and go to meet them [the commandos] saying ‘we are pacifists and not terrorists.’

“Masked commandos took possession of the ship. They were aiming for the captain’s cabin.”

Benderbal was not on board Mavi Marmara, the lead ship of the flotilla, but on one of the other five ships. He gave this account to Europe 1 radio after arriving at a Paris airport.

Dimitris Gielalis, Greece: “Suddenly from everywhere we saw inflatables coming at us, and within seconds fully equipped commandos came up on the boat.

“They came up and used plastic bullets, we had beatings, we had electric shocks, any method we can think of, they used.”

Mutlu Tiryaki, Turkey: “When we went up to the deck, they emerged from helicopters and military boats and attacked us. They approached our vessel with military ships after issuing a warning. We told them we were unarmed. Our sole weapon was water.”