Valkyrie is a 2008 Hollywood movie directed by Bryan Singer and starring Tom Cruise. It is based on an actual attempt by German aristocrat and army officer Claus von Stauffenberg and other co-conspirators to assassinate Adolf Hitler on July 20, 1944. Valkyrie starts with Stauffenberg (played by Cruise) in North Africa, questioning Hitler’s leadership because Hitler is leading Germany to destruction. During a British air raid Stauffenberg is injured, losing an eye and a hand. Since he can no longer serve on the front lines he is sent home where he recovers and becomes involved in administration.

The “German Resistance” contacts Stauffenberg to help them get rid of Hitler. Stauffenberg suggests they make use of Germany’s Valkyrie Plan which mandates that the Reserve Army keep order in Germany should anything disrupt communications from Hitler or should Hitler be killed. Stauffenberg eventually plants a bomb in Hitler’s conference room but when the bomb detonates Hitler is only slightly injured. The conspirators think Hitler is dead and try to put the rest of the Valkyrie plan into action but are arrested. At the end of the movie Stauffenberg is shot by a firing squad, screaming “Long live sacred Germany,” before falling dead.

Valkyrie is part of the 65-year-long post-war campaign to rehabilitate yesterday’s Nazi war criminals, to restore the “honour” of the Second World War German General Staff and High Command. The campaign was initiated at the end of the Second World War to rebuild the Wehrmacht as quickly as possibly so it could be mobilized in the Anglo-American crusade against the Soviet Union and communism. Even as the Nuremberg trials were nearing an end, Anglo-American military circles were helping bring about the acquittal of the German General Staff and High Command as a criminal organization, a verdict strongly protested by the Soviet judge, Nikitchenko. Articles defending Nazi officers and SS-men who survived the war soon appeared in U.S. military magazines. Upon the announcement of the Nuremberg sentences, official Anglo-American voices urged a reprieve for the condemned. Beginning in 1951, John J. McCloy, U.S. High Commissioner for Germany and former Chairman of the Rockefeller Chase Manhattan Bank, initiated a campaign of wholesale pardoning and commutation of sentences of thousands of Nazi criminals, including the prominent industrialists such as Krupp, Flick, and the I.G. Farben directors. By the end of 1958, all war criminals convicted at any of the twelve trials subsequent to the Trial of the Major War Criminals were free. 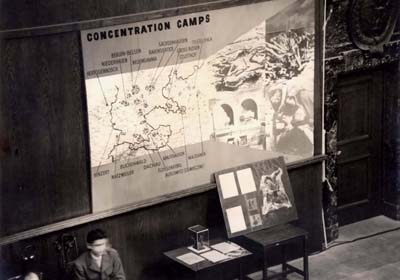 A map of Nazi concentration camps presented as evidence of war crimes at the Nuremberg Trials, 1945-46. 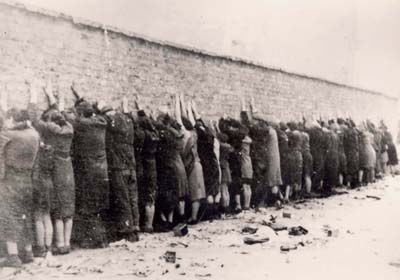 Photo showing the execution of Jewish prisoners presented as evidence of war crimes at the Nuremberg Trials, 1945-46.

A key part of the revisionist campaign is the myth of the “military opposition to Hitler.” While the documented facts fully confirm that the German General Staff and High Command unhesitatingly helped Hitler to power and knowingly implemented his barbaric policies, the myth was created that certain officers “heroically revolted” against the Fuhrer’s tyranny out of a “sense of honour.” Accompanying this was a second myth, that Germany’s military defeat was solely the fault of the dilettante Hitler and that had Hitler been removed and the plans of the German generals been used the Nazis would have been victorious. A third myth was that almost the entire intelligence service of the German army had collaborated with the Allies to subvert Hitler’s plans. To spread these myths, a veritable flood of revisionist literature in the form of books, memoirs, and essays was produced following the Nuremberg Trials, including by non-Germans such as future CIA director Allen Dulles and British military strategist H. Liddell Hart. Certain Nazis such as Generals Rommel and Guderian were particularly glorified as unblemished knights. Prior to the 2008 movie Valkyrie, Hollywood had already started to play its nefarious role in the revisionist campaign with pro-Nazi movies such as The Desert Fox: The Story of Rommel (1951), The Enemy Below (1957), amongst others.

The 2008 movie, Valkyrie is aimed at once again trying to consolidate the legend of the “steadfast resistance” against Hitler by the “honourable” Nazi officers, specifically by portraying the July 20, 1944, assassination attempt as a heroic deed, which is another example of the repetition of historical falsifications. The movie is another attempt to absolve the German General Staff and High Command of any responsibility for war crimes and to promote them as a powerful and suitable ally in the U.S.-led imperialist wars against the world’s people and against communism. But the Hitler assassination attempt was not an act of honour but an act of despair by a military clique which, being fully aware of impending defeat, wanted at the last moment to seize power in order to bargain for the best possible conditions when signing a peace treaty with the Anglo-Americans or even to unite with them in an anti-communist crusade. Leading Nazis such as Hermann Goering and Heinrich Himmler hoped to the very end of the war for a disruption of the anti-fascist coalition and to be able to march eastward with Anglo-American imperialism to destroy the Soviet Union.

(Note: The German ruling circles have always supported the Nazi rehabilitation campaign, for example, by starting to place former Nazis back into positions of power right after the end of the Second World War. In 1980, the German government established a memorial to the so-called anti-Nazi resistance movement in the Benderblock, the building housing the Berlin offices of the Ministry of Defense. The street was renamed the Stauffenbergstrasse, and the Bendlerblock now houses a permanent exhibition of over 5,000 photographs and documents. The courtyard where Stauffenberg and others were shot on July 21, 1944 is now a memorial site, with a commemorative plaque and a statue.)