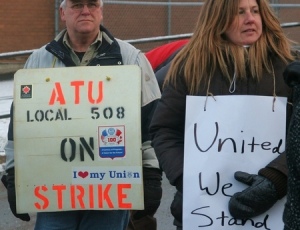 Metro Transit workers employed by the Halifax Regional Municipality walked off the job in the early hours of February 2 resisting demands for concessions in their collective agreement. The 763 unionized employees are represented by Amalgamated Transit Union Local (ATU) 508 and they provide and maintain bus and ferry service to some 50,000 commuters daily. They have been without a collective agreement since September 2011.

On January 12, the union membership rejected the contract proposed by the transit authority by a resounding 98.4 per cent. Wages are not the issue. The union was willing to recommend a very modest 0.5 and 3.5 per cent increase to its membership over the two-year contract sought by management.

Contract negotiations broke off with more than 70 outstanding items still on the table after months of negotiations. The main issue is that the city is demanding concessions on contract language that in some cases has been in effect for forty years. Currently all mechanics and drivers are full-time employees. Management is demanding the union agree to the introduction of part-time work and contracting out of work.

According to Ken Wilson, President of ATU Local 508, city officials had requested that the conciliator file his report with the aim of forcing a strike or lockout. It is clear, he said, that the municipality is trying to force them to accept these concessions and destroy the union.

The union points out that management is already moving in that direction. For instance, rather than replace vacant “interior wash” positions, management has outsourced the work to a local auto detailing company, The Shine Factory. Based on statements by city spokesperson Shaune MacKinlay, that deal is actually more expensive than simply filling the vacant cleaner positions. The city is paying $281.57 to clean a standard sized bus – which Metro Transit drivers deliver for cleaning – while it would cost the city only $220 if unionized transit workers did the job. Clearly, contracting out is not about cost savings for the city!

Another issue on the table is shift scheduling. For forty years drivers have decided their shifts based on seniority. Management wants to scrap that and assign either fixed eight-hour shifts starting at 5:00 am or split shifts.

The overwhelming strike vote shows how serious the Halifax transit workers consider this fight. The concessions management is demanding of the union and its members were raised in an earlier contract negotiation and soundly rejected by transit workers then as well. They are determined to defend their jobs and working conditions against contracting out of their work to private, for profit, service providers.