The Halifax Media Co-op’s Miles Howe interviewed Ken Wilson, president of Local 508 of the Amalgamated Transit Union, at the February 12 rally in the Grand Parade. Our transcription of the interview follows: 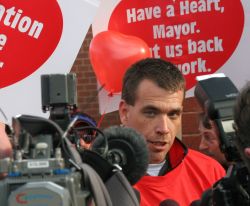 Miles Howe: Day 10 of the ATU 508 strike was ushered in with bitter cold and frozen conditions which made all types of transportation perilous. Members of the striking transit union and their allies today congregated at a solidarity rally in Grand Parade square which drew an impassioned crowd despite the sheet of ice which covered nearly the entire city. Union president Ken Wilson who has repeatedly gone away empty-handed from the bargaining table was among those in attendance. Please enjoy the following interview with Ken Wilson president of ATU 508. For the Halifax Media Coop, I’m Miles Howe.

MH: First, what message do you want to get out to the public today?

KW: Same old, same old. Call your councilor, call your mayor, and ask them why we aren’t at the table. Why did Council allow HRM’s bargaining team remove rostering to avoid a strike, but allowed them to put it back on the table to keep us on strike?

MH: What was in the original offer? What was the sticking point?

KW: The offer to avoid the strike that they made at the eleventh hour, so to speak, rostering was removed. It was a three-year deal, a 3.5 per cent wage increase over three years. That wasn’t the issue. The issue was that there were still 70 other take-aways that were on the table, and we said to the employer, I said it to the director Eddie Robar, and said it to the manager of labour relations and chief negotiator, André Gillis, that if you want to keep the buses on the road, and avoid the strike, you remove the last big item, and let’s stay at the table and work out the last 70 items. I’m prepared to move on some; I can’t move on all. Right? It’s a good news story. We’d go to work the next morning, Thursday, February second, as scheduled. And Eddie looked at me and said “Absolutely not, this is an all or nothing deal.”

MH: Can we take this up into the bigger picture here in terms of privatizing all kinds of public transit, water works, is that what’s happening here?

KW: I’d like to hope it’s not. I think it is a lack of leadership. Who is running the city? Is it the elected officials or is it the bureaucrats who are hired? I think that’s the question that needs to be asked right now. Let’s look at our history, a hundred and four years of history of moving people in this city. It typically takes twelve to fourteen months for a contract, not five. So why rush this? What is the hidden agenda? Is it because there is a municipal election in October and they didn’t want a strike in September and October? Because that’s 12 or 14 months from when our contract expires. Is it the fact that there is a deficit in Metro Transit and they can’t afford to keep us on the road under the present collective agreement until a new one is worked out? Right? That’s the question that needs to be asked. We always said from the beginning that we do not want to stop working. The employer forced up to stop working. There’s a difference.

MH: Is  there any time that you’re getting back to work?

KW: My phone is on 24/7. There’s never a time on. My members are strong on this rostering. As long as rostering remains on the table we’ll be looking at the longest transit strike in Halifax’s history, and that’s pretty sad. And I hope it doesn’t. Remember the public are the people behind Metro Transit. All they have to do is call their councilors, call the mayor and say get us back to work. Get back to the table. Get us somewheres. Let the courts decide binding arbitration. What does it matter? Not at this point. Let’s get back to negotiations, back to the table.