Obama’s self-serving falsification of history: ‘he is a good man’ 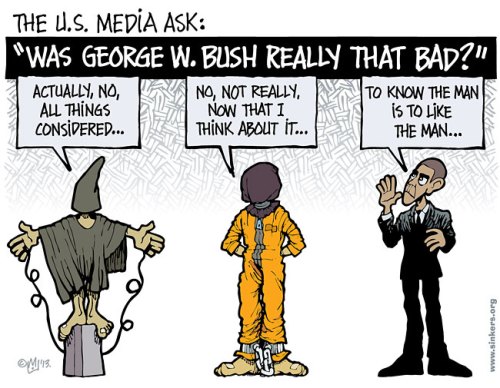 “So we know President Bush the man. And what President Clinton said is absolutely true — to know the man is to like the man, because he’s comfortable in his own skin. He knows who he is. He doesn’t put on any pretenses. He takes his job seriously, but he doesn’t take himself too seriously. He is a good man.” Barack Obama, speaking at the dedication of the George W. Bush Presidential Library, April 25, 2013

“Obama’s main message is, ‘If you don’t do it the American way, we will crush you.’ It is all the more ’devious’ because it’s coming in this velvet glove that claims that it’s being done in a spirit of cooperation. The real message is, ‘we will defeat you.’ A new disease is being spread called ‘Obama fever.’ The symptoms are flag waving, millions gathering and clapping like a bunch of trained seals and hypnotic sectarian rapping. O-Ba-Ma, O-Ba-Ma!” Mohawk Nation News, January 21, 2009

THE ruling circles stand against history and the need for democratic renewal. Even if we adopt the Obama mantra to let bygones be bygones, his self-serving references to the past speak volumes about the present and the future course under the U.S. Obama presidency.

In the same breath, we have the U.S. media – after canonizing Margaret Thatcher, prominent anti-social politician and ideologue, who once imperiously remarked “there is no such thing as society” – now unleashing further falsifications of history to rehabilitate the Bush regime, so as to justify and commit today the crimes about which they accuse others.

The Canadian people and the peoples of the world have stood and continue to stand against these crimes.

We know both men.

*Cartoon by MIKE FLUGENNOCK. Thanks to Undernews.