(AP) – The U.S. Justice Department secretly obtained two months of telephone records of reporters and editors for The Associated Press in what the news cooperative’s top executive called a “massive and unprecedented intrusion” into how news organizations gather the news. The records obtained by the Justice Department listed outgoing calls for the work and personal phone numbers of individual reporters, general AP office numbers in New York, Washington and Hartford, Conn., and the main number for AP reporters in the House of Representatives press gallery, according to attorneys for the AP. It was not clear if the records also included incoming calls or the duration of calls. In all, the government seized the records for more than 20 separate telephone lines assigned to AP and its journalists in April and May of 2012. The exact number of journalists who used the phone lines during that period is unknown but more than 100 journalists work in the offices where phone records were targeted, on a wide array of stories about government and other matters. END_OF_DOCUMENT_TOKEN_TO_BE_REPLACED

“In a time of universal deceit, telling the truth is a revolutionary act.” — George Orwell

Editorial entitled ‘A rebuttal’ published on May 10, 2013

THE editorial in this space last Friday (“To the rescue,” May 3) questioned whether any meaningful changes to search and rescue services can be expected from Defence Minister Peter MacKay. The reason? MacKay has a tendency to say one thing and do another.

The minister’s communications director, Jay Paxton, responded with a letter in which he described said editorial as “partisan drivel.” It is not unusual for a person charged with partisan duties to see all contrary argument as partisan in itself. It matters not which foot the shoe is on. END_OF_DOCUMENT_TOKEN_TO_BE_REPLACED

Published in opposition to the despicable and chauvinist articles of Sun Media Corporation, itself owned by Quebecor, “10 things we hate about Montreal,” allegedly published in response to an unlinkable Richard Martineau piece on 10 reasons to hate Ottawa.

Protesters pledge to block cowardly attack against workers and their regions 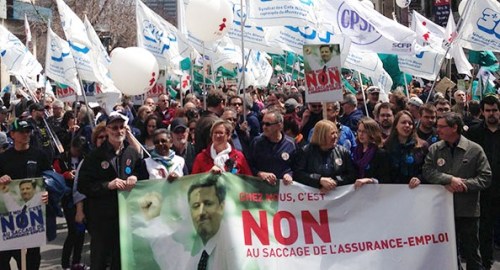 ON APRIL 27, more than 50,000 people from across Quebec, joined by a contingent from Hamilton, Ontario, converged in Montreal for a militant demonstration against the Harper government’s anti-social changes to the Employment Insurance (EI) program. A demonstration on this same issue was also held in Edmunston, New Brunswick that day. END_OF_DOCUMENT_TOKEN_TO_BE_REPLACED 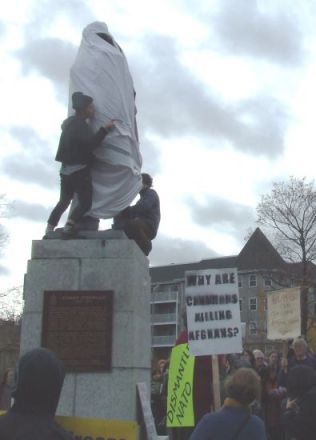 Commemorative statue shamelessly honouring the Genocidaire Cornwallis is covered by anti-war activists at protest against the Halifax International Security Forum, November, 2010. The rally renamed “Cornwallis Park” Peace & Freedom Park as a tribute to the heroic struggle of the First Nations against imperialist war and conquest, including the present-day stand of the Innu against NATO training flights in Labrador.

EDWARD CORNWALLIS was a military leader tasked with founding Halifax in 1749 as part of Britain’s strategy to capture all of North America and push France off the continent.

Edward Cornwallis was a genocidal war criminal whose attempted extermination of the Mi’kmaq people ranks as one of the province’s darkest chapters.

For 300 years, the debate over his legacy has raged. But until now, one person has been strangely absent: Cornwallis himself. No biography told his story and provided deep context for the events of 1749-1752. Jon Tattrie’s new book, Cornwallis: The Violent Birth of Halifax, uses Cornwallis’s own writing, and the writing of those who knew him best, to unearth the man buried by the controversy. END_OF_DOCUMENT_TOKEN_TO_BE_REPLACED 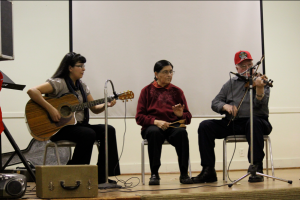 We have received the following media release from James Cheecho and family, which we are reproducing for the information of our readers.

JAMES CHEECHOO will be visiting Aberdeen from 13-20 May 2013 on an exciting one-off visit to meet musicians and give performances and a workshop on the James Bay fiddle tradition and its historical connections with Scotland. This will be part of a two-week Scottish tour which will incorporate performances on the Isle of Skye and at the Orkney Folk Festival in conjunction with the 200-year anniversary of the explorer John Rae’s birth. James will be accompanied by his wife, Daisy, and his daughter Treena, on wooden spoons and drum. END_OF_DOCUMENT_TOKEN_TO_BE_REPLACED 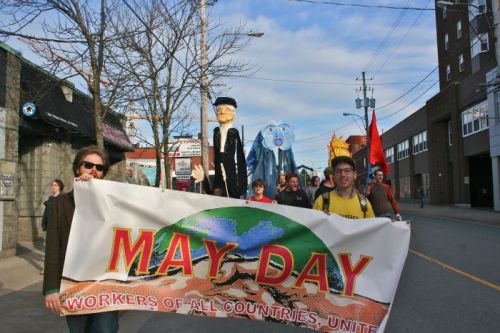 AS ACROSS Canada and around the world, MAY DAY 2013, the international day of working class unity and struggle, was celebrated in Halifax with the 7th annual rally and march, beginning at 5:00 pm at Grand Parade. In a province where a social democratic government upholds monopoly right and abdicates its social responsibility to uphold public right, workers’ slogans and demands held the federal and provincial governments and monopolies to account. END_OF_DOCUMENT_TOKEN_TO_BE_REPLACED

Filed under No Harbour for War (Halifax), Working Class 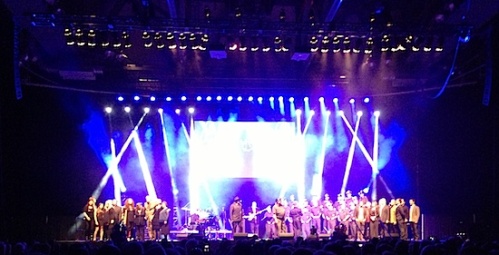 FROM the opening strains of a slow air by Ashley MacIsaac to the final chords of Rita MacNeil’s musical paean to love of Cape Breton, ”Home I’ll Be” (pictured above), last night’s tribute concert organized by Joella Foulds and Max MacDonald was magnificent. END_OF_DOCUMENT_TOKEN_TO_BE_REPLACED 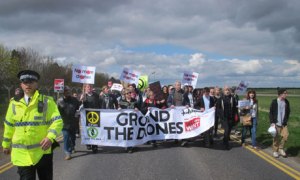 Over 400 protesters march to the perimeter fence of RAF Waddington, Lincolnshire to protest its use as a centre for drone piloting in Afghanistan | Matthew Cooper/PA

STOP THE WAR activists from across Britain took part in the first national “Ground the Drones” demonstration in Lincolnshire on April 27. It brought together the workers movement from Lincoln and Stop The War groups from many parts of Britain to oppose these barbarous terrorist weapons that are being operated from the military base at RAF Waddington over Afghanistan. The base assumed control of British drone missions in Afghanistan earlier that week.  END_OF_DOCUMENT_TOKEN_TO_BE_REPLACED

Scientists resist program to silence them

PHILIP FERNANDEZ* on the attempts to muzzle scientists and deny the right of the public to getting factual and scientific information in a timely manner. The Harper Government’s anti-social agenda has a political aim: to “marginalize Canadians from participating in more fully debating and discussing issues that concern them.”

Scientists rally on Parliament Hill, July 10, 2012, against Harper government’s attacks
on their research and natural environment.

THE Harper government is particularly intent on silencing scientists and researchers from speaking to the media “especially when the scientists’ research or point of view runs counter to current Government policies on matters such a environmental protection, oil sands development, and climate change.” So says a letter to the Information Commissioner of Canada sent by the Environmental Law Clinic at the University of Victoria, together with Democracy Watch. END_OF_DOCUMENT_TOKEN_TO_BE_REPLACED

U.S. congressman demands that scientific papers be approved by politicians 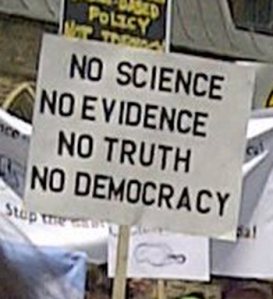 THE politicizing of science and the negation of the scientific method are features of the neo-liberal, anti-social offensive in Canada, as is evident from the systematic attempts by the government to muzzle scientists and force them to toe the Harper agenda.

“Down South” – where the main goal of scholarship in the humanities as in all fields of academic research cannot be said to uncover truth or advance knowledge, but to do something completely different – a U.S. congressman, Lamar Smith of Texas, has made this offensive clearly visible. He has submitted a bill titled the “High Quality Research Act,” which would in effect add a politician into scientific studies. According to the Addicting Info website, the bill says that any research done using federal funds (which is the majority of research done in the United States) must have its results and finding approved by the Committee on Commerce, Science, and Transportation of the Senate and the Committee on Science, Space, and Technology of the House of Representatives. END_OF_DOCUMENT_TOKEN_TO_BE_REPLACED 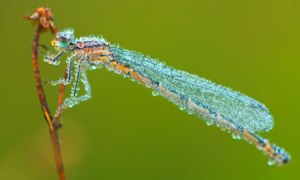 Guardian, UK – THE world’s most widely used insecticide is devastating dragonflies, snails and other water-based species, a groundbreaking Dutch study has revealed. END_OF_DOCUMENT_TOKEN_TO_BE_REPLACED

All Out to Empower the Working Class and People! Workers and Oppressed Peoples of All Countries, Unite! 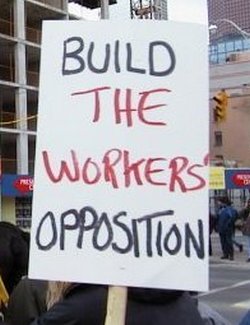 On the occasion of May Day 2013, the Communist Party of Canada (Marxist-Leninist) salutes the Canadian and international working class. We greet all those who have raised their voices in defence of the rights of all; all those who have organized themselves into a force to defend their individual and collective interests and the general interests of society; all those who are resisting as best they can the onslaught of the anti-social offensive.

May First is an occasion to sum up the experience of class struggle in the context of the concrete conditions. This keeps workers’ thinking ever fresh, sharp and capable of finding a way forward. END_OF_DOCUMENT_TOKEN_TO_BE_REPLACED

Tagged as Communist Party of Canada (Marxist-Leninist), May Day

All Out for May Day 2013! – International Day of Working Class Unity and Struggle 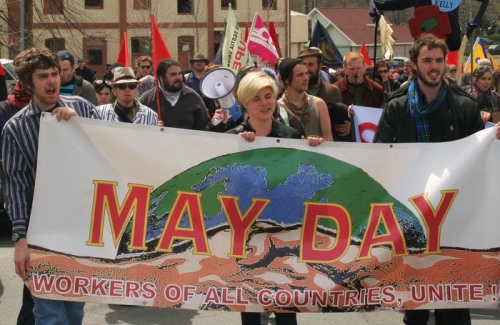 OUR warmest revolutionary May Day greetings on this day of unity in struggle – the day of affirming people’s rights, to assert their own course of development. There is an alternative!

For a complete calendar of May Day events across Canada, visit http://www.cpcml.ca/Calendar/130426-MayDayEventsDR3.html