The Canadian war on science: A chronological indictment 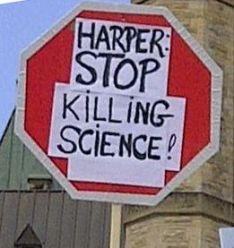 JOHN DUPUIS, reblogged from Confessions of a Science Librarian, concentrates on the Harper agenda regarding “natural sciences, environment and some public health topics rather than looking more broadly at how the Conservative government treats the humanities, social sciences, memory and heritage institutions and just generally any sort of evidence-based policy- or decision-making.” How $50 million in federal funding is being directed to such pseudo-science centres of big capital as the Perimeter Institute in Kitchener-Waterloo; the militarization of research, especially the role of Lockheed Martin; and the reactionary ostracism of science and scientists from Iran, Cuba and other countries merits definite attention. – TS

As is occasionally my habit, I have pulled together a chronology of sorts. It is a chronology of all the various cuts, insults, muzzlings and cancellations that I’ve been able to dig up. Each of them represents a single shot in the Canadian Conservative war on science. It should be noted that not every item in this chronology, if taken in isolation, is necessarily the end of the world. It’s the accumulated evidence that is so damning.

Most of the items come from various links I’ve saved over the years as well as various other media articles I’ve dug up over the last week or so. This series at The Huffington Post has been particularly useful as has this article at the Wastershed Sentinal.

A long list of various environmental programs that the Harper government has discontinued or slashed funding to is here. I haven’t found individual media stories about all of them, so they aren’t in the list below. If you can help me find stories about some of those programs, etc, please let me know. As well, some stories are treated multiple times, with perhaps an initial story telling the big picture or introducing a large series of cuts and later stories fleshing out details.

Update 2013.05.27: Undated list of science or environmental libraries closed is here: Natural Resources Canada is set to close six of fourteen libraries in 2012-2013, Parks Canada will consolidate 5 libraries into one, Transport, Infrastructure and Communities. Undated list of women’s programs cut since 2006, including many science or health-related, including: Assisted Human Reproduction Canada, Atlantic Centre of Excellence for Women’s Health

This list is no doubt incomplete. There may also be link errors or duplications.

In particular, if you have updates on any of the stories, including reversals or reprieves, I want to hear those too.

Please feel free to make suggestions and corrections in the comments or to me at jdupuis at yorku dot ca.

Update 2013.05.23. I’ve noticed the large number of posts linking to this one and even a few basically republishing my list, links and all. Since a number of people seem to be finding the spreading of the information in this post useful, please consider it CC0. To the extent possible under law, I am waiving all copyright and related or neighbouring rights to this post, The Canadian War on Science: A long, unexaggerated, devastating chronological indictment. This work is published from Canada.

Update 2013.05.27. Over thirty new items added to the list. Thanks to everyone who made suggestions either in the comments or via email.

First, as to why this extended series of posts is named the way it is. I am mindful that this blog is hosted on a US-based site so my main aim is to make “The Canadian War on Science” both catchy and mostly meaningful to a broad audience. In that spirit, something like “The Canadian Conservative Government’s War on …” at least initially seemed to me to be too wordy. It’s also fairly common parlance to refer to the government of a foreign country, no matter the internal situation, just by that country’s name. When I say that “France is doing this” or “Japan is doing that,” I of course mean the French or Japanese governments. It’s a kind of shorthand, if you will, that makes more sense on a non-Canadian site where I’m talking about Canada. So, I’m sort of accepting that while this usage will be somewhat annoying to Canadians, it’s both a useful shorthand and the precedent I’ve set for myself.

Second, on scope. I’ve mostly stuck to the natural sciences, environment and some public health topics here rather than looking more broadly at how the Conservative government treats the humanities, social sciences, memory and heritage institutions and just generally any sort of evidence-based policy- or decision-making. That’s purely for reasons of focus and time. It was quite time-consuming to compile this list initially so I was quite aware of just getting it finished. I’ve also received a huge number of suggestions both in the comments and by email and checking and adding those has also been a significant task. While I have in the past blogged about the challenges at, say, Library and Archives Canada, I decided that that would be out of focus for the purposes of this list. I would definitely encourage anyone out there to tackle creating a broader or a differently focused one. I have put this list under a CC0 licences so please feel free to take what I’ve done as a starting point.

One response to “The Canadian war on science: A chronological indictment”