Ria Novosti (Nov. 29) is reporting that Syria has informed the Organization for the Prohibition of Chemical Weapons (OPCW) that the destruction of all unfilled munitions, which were to be eliminated by January 31, 2013 is complete.

“On November 18 Syria informed the secretariat of the elimination commission that all declared items in the category “3” (chemical weapons) had been destroyed,”  states OPCW.

Previously the OPCW Executive Council approved a detailed plan for the destruction of the Syrian chemical arsenal, according to which all the materials for the manufacture of chemical weapons, except isopropanol, are to be exported from Syria until February 5, 2014, and the most dangerous ones have to be exported by the end of this year.

Syria has consistently called the assertions made by Obama and his Secretary of State John Kerry that the Syrian government was responsible for the chemical attack near the capital Damascus in August as “based on old stories,” and “full of fabrication and lies” – made to justify foreign military strikes and intervention.

Never mind Israel’s lethal stockpiles, forever, seemingly, blind eye territory, as apparently is the United States 5,449 metric tons chemical weapons arsenal, which cannot be disposed of until at least 2021 – another eight years – allegedly due to the hazards involved (Japan Times, September 12, 2013). The USA maintains this massive stockpile although there exists no credible threat against it.

However, the storm troopers of the OPCW joined the other insurgents in beseiged Syria and in under a month (stating) “ … completed the functional destruction of critical equipment for all of its declared chemical weapons production facilities and mixing/filling plants, rendering them inoperable.” 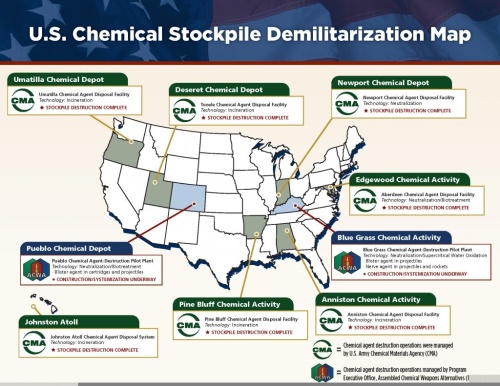