Prime Minister Stephen Harper will be the keynote speaker at a fundraiser for the memorial that is officially called “A Memorial to Victims of Totalitarian Communism – Canada, a Land of Refuge” on May 30 at the Toronto Congress Center. The anti-communist monument project in fact promotes the cause of Nazi SS. It was initiated by a private group calling itself “Tribute to Liberty” (TTL), and is based on and linked to the very similar U.S. Victims of Communism Memorial Project, whose honourary chairman is war criminal George W. Bush and which is funded by monopolies such as war contractor Lockheed Martin. Sponsorship tables for the Harper-led Toronto fundraising event are $2,500 and individual tickets are $250. END_OF_DOCUMENT_TOKEN_TO_BE_REPLACED

Ontario election: Conservatives’ divisive attack on public services and the workers who provide them

Ontario Political Forum (May 23) – IN THE current election campaign the Ontario Progressive Conservatives (PCs) under leader Tim Hudak have been following a strategy which borders on hate mongering and has no place in the political arena of a civilized society. Using divisive proposals and crude, inflammatory rhetoric, the PCs are blatantly attempting to divide working people into allegedly conflicting groups and to incite one group of workers against another. END_OF_DOCUMENT_TOKEN_TO_BE_REPLACED

Ontario election: The need to establish relations with First Nations on a modern historical basis

Philip Fernandez, Ontario Political Forum (May 22) – THE RING OF FIRE is a massive deposit of chromite and other strategic minerals in Northern Ontario worth some $60 billion. Located in the traditional lands of seven First Nations, it has been the subject of debate and discussion for a number of years since it was discovered. Its development has been blocked from proceeding because the First Nations concerned have affirmed their right to a say and control over how this mineral wealth is to be developed. END_OF_DOCUMENT_TOKEN_TO_BE_REPLACED

Biden in Romania: Talks reveals extramundane nature of US push for war 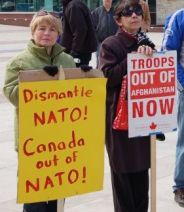 Rick Rozoff, RIA Novosti (May 22) – US Vice President Joseph Biden appeared at a military base in the capital of Romania on May 20 and, against the backdrop of this year’s annual Carpathian Spring joint military exercises, announced that Washington’s willingness to go to war over the mutual military support clause of the 1949 North Atlantic Treaty, the founding document of the North Atlantic Treaty Organization, is not only clear and unwavering, but indeed of a mock-religious – extramundane and sempiternal – nature.

In his precise words: “America’s commitment to collective defense under Article 5 of NATO is a sacred obligation in our view – a sacred obligation not just for now, but for all time.” In aeternum, in saecula saeculorum and in line with eschatological imperatives. END_OF_DOCUMENT_TOKEN_TO_BE_REPLACED

Russia and Nicaragua to cooperate on construction of interoceanic canal

Two ports, an airport, an oil pipeline, and other facilities are also to be built as part of the project, the cost of which is estimated at $40 billion. Source: AP

Yuri Paniyev, Russia Beyond the Headlines (May 14) – Moscow and Managua are to cooperate over the next few years on the construction of the so-called Interoceanic Grand Canal, a new alternative to the Panama Canal. Deeper, wider, and longer than its rival in Panama, the new canal will challenge U.S. control over the region, though experts are divided on its geopolitical benefits for Russia.
END_OF_DOCUMENT_TOKEN_TO_BE_REPLACED