When it comes to military personnel and their families, the Canadian government is like an abusive boyfriend

TS note: This message was sent to David Pugliese, Defence Watch, from an individual who is involved in the Canadian military system and whose spouse is also in the Canadian Forces. Mr Pugliese writes, “they have asked to remain anonymous for fear of retribution from government and senior leadership.”

THE Canadian government is like the abusive boyfriend who brings flowers to his girlfriend at her workplace after a fight.

Her friends think he’s awesome. They see his nice clothes and his friendly smile. They think he is hardworking and smart. They see his friends treat him with respect. But they have never been alone with him. They don’t know what is really going on behind the façade.

The government is like this. Their bouquet is simply on a larger scale, in front of thousands of people no less. They put on a parade and ceremony and arrange a fly by. They call it a day of honour for the Afghan war vets. They publicly praise them for everything they have done in the last 12 years. They pat them on their back for their bravery and commitment to the country. They force all their peers to come out and cheer them on. 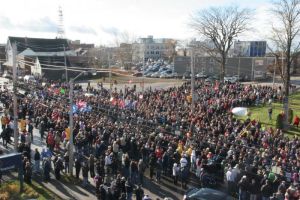 Another view of the large rally in Sydney, Cape Breton on Nov. 9, 2013 demanding that government provide veterans public service.

But privately, it is a different story. The government promised soldiers that they would be well cared for if they got hurt, but privately they force them to repeatedly beg for assistance. If a soldiers gets so low that he or she commits suicide, they blame them for not coming forward and asking for help sooner (FYI, many soldiers ARE asking for help, but they don’t always get the right kind of help, if any at all).

If families complain, soldiers are warned to keep their family ‘under control’. The military only allow soldiers to only speak positively about their chain of command in public forums, or they could be charged. As someone who has worked with both abused women and abusive men, these are typical tactics.

And now with the ‘recent’ revelations of sexual misconduct (aka abuse) being prevalent in the forces, the military leadership reacts with shock and publicly scolds this behaviour and promises to get to the bottom of it. But privately, this is nothing new. It is only a reminder that they need to keep better control of their troops, because people are watching and starting to suspect that not all is as it appears. The bruises are starting to show as a few brave victims are starting to tell their story.

However, abuse usually gets worse when the abuser is fearing exposure. When their secrets are starting to be revealed, they increase the pressure to ‘behave’ as the threats become more severe. And what is more threatening then taking away a soldier’s livelihood, their career, the respect from their peers, and dare I say, their ‘military family’ (as dysfunctional as it may be, it may be all a soldier has)? What is a soldier to do but follow orders? 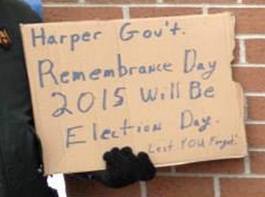 This day of honour is for the government nothing more then a big bouquet of flowers to the bruised and hurting soldiers and their families. Because if they truly honoured them they would be respecting the promises they made. They would honour them everyday and not just May 9th, not just with a parade and a ceremony. They would be compensating them as they were promised. They would apologize when mistakes are made, and not blame the injured. They would do everything in their power to make the health care truly the best in the world and not just on paper and in speeches. They would reach out to families and offer them the long term support that is really needed when caring for a member who has a long term injury (6 to 8 sessions with a social worker doesn’t cut it). There is simply so much more that could be done if the government truly honoured their soldiers.

The government should be ashamed. Canadians deserve to know the truth and we all deserve to be treated better. Then we would truly be able to honour soldiers and their families for the sacrifices they have made.