Witness to an international crime: Israeli state terrorism in Gaza 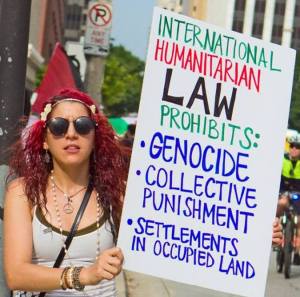 “Protective Edge,” the cartoonish name given to the latest Israeli military offensive against the occupied people of Palestine, is representative of the inverted reality whereby the 1.7 million captive and largely defenceless Palestinians in Gaza are the vicious aggressors against the peace-loving settlers of Israel. Similar to the inverted reality in the U.S., where the myth of the innocent settler was created to justify the systematic slaughter of Indigenous peoples, the genocidal policies of Israel are camouflaged by the transformation of its position from an armed colonial invader to one of victim.

This repositioning is aided and abetted in the U.S. by a corporate media whose world view and angle of reporting is framed by the innocent settler narrative. This narrative simultaneously liquidates and normalizes the colonial relationship between the colonizer and the colonized so that the occupied territories are not occupied but transformed into “disputed” territories and all forms of resistance on the part of Palestinians becomes terroristic.

Informed by this imperial vision, the corporate media not only parrot Israel’s victim narrative but go even further with the creation of the two-equal-sides fiction. Mainstream coverage laments how both sides are locked in battle or a spiral of violence, giving the absurd impression that the violence in the occupied territories is a conflict between two forces with similar power and equal moral standing.

It should be clear that attempting to conceptually equate the force of the state of Israel, one of the most powerful militaries in the world, with a resistance movement of a captive people trapped by land and sea in an open-air concentration camp on one of the most densely populated strips of land on the planet is a position that is fundamentally immoral. Yet for most editors and reporters in the U.S., pro-Zionist liberals and their counterparts in the Christian Zionist movement as well as some elements of the European press and public, the conceptual blinders of white supremacist colonial consciousness makes it impossible to see the immorality inherent in this construction of the so-called conflict.

The position for most of the world is that the latest assault on the Palestinian people is a war crime and an ongoing crime against humanity. That position was affirmed by the international Court of Justice, which ruled that as an occupying military power Israel has an obligation under the Fourth Geneva Convention of 1949 to protect the rights of civilians under military occupation.

Within this legal framework, the killing of civilians under occupation, indiscriminate shelling of Palestinian communities, collective punishments, house demolitions, arbitrary imprisonment, the theft of water and other natural resources and the building of settlements in occupied territories are all considered war crimes and crimes against humanity.

That is the real story that should be communicated to the general public in the U.S. But instead, the public is being led to believe that the Israeli military assault is a legally and morally justified response to aggression from Hamas. From this perspective, there is no special responsibility on the part of the Israeli authorities to protect the rights of Palestinians under military occupation, and the actions of the Israeli government in response to the killings of the three Israeli teenagers is seen as a measured and rational response.

Colonialism and the humanitarian fraud 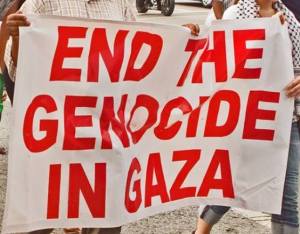 Only the most naive believe the current military assault has anything to do with “defence” issues related to the symbolic resistance offered from Hamas via the firing of rockets into Israel. Honest commentators on this issue know that Israel provoked the response from the Palestinian resistance with the mass repression it launched in Gaza after the killings of the three Israeli teenagers in order to use the response to justify its attack on Hamas. An attack meant to destroy the newly established unity government of the Palestinians.

The colonialist mentality sees any resistance, no matter the form, as illegitimate, punishable by death and unrelenting terror. That message is clear for Palestinians as their homes are reduced to dust and the people dig out the bodies of their children, spouses, fathers and grandmothers. The other message communicated to Palestinians, once again, and which they understand all too well, is that compared to the lives of the settlers their lives are worthless and there is no “responsibility to protect” for them.

The assault on the people and the institutions of Gaza has as its objective the eradication of the people of Gaza – not necessarily in the physical sense, only because at this stage in global consciousness any such attempt would galvanize universal opposition, but to erase Gaza as a functioning society, to destroy it politically, culturally, spiritually and psychologically. A process that IIan Pappe refers to as “incremental genocide,” that whatever the label is terroristic in its most naked, brutal and devastating effect.

When genocide or systematic ethnic cleansing is not a viable option, reducing the indigenous population to a weak, terrorized and dependent condition is the next best thing for settler policy. The targeting of the civilian infrastructure and governing institutions by the Israeli military makes it clear that this is the objective of the current attack on Gaza.

The international community has failed to hold the Israeli state accountable for war crimes and other serious violations of international law over the last four decades. Human rights organizations and United Nations special procedures have produced detailed reports on the crimes committed by Israel over the last four decades without the perpetrators being brought to justice. And when it comes to Israel, humanitarian intervention and the responsibility to protect is exposed as the imperialist ideological construct that it is.

Images of Palestinian children being dug out of bombed-out residential buildings have not resulted in calls for humanitarian intervention to save a population that may be the most brutalized on the planet today. Instead weak and pathetic calls are made for “both sides” to show restraint and protect “civilians” as though a distinction can be made or is ever made between combatants and non-combatants when it is the whole people who are seen as the enemy by Israeli authorities.

Richard Falk, the United Nations Special Rapporteur on Palestinian human rights points out the hypocrisy of the West when it comes to Israel,

“instead of condemning such recourse to massive violence as ‘aggression’ that violates the UN Charter and fundamental international law principles, the reaction of Western diplomats and mainstream media has perversely sided with Israel. From the UN Secretary-General to the president of the United States, the main insistence has been that Hamas must stop all rocket attacks while Israel is requested ever so politely to show ‘maximum restraint”.”

What is the future for Palestine? Is reconciliation possible within the context of an ongoing colonial relationship? Is a two-state solution still viable with more than 500,000 settlers occupying almost half of the land that was supposed to be the Palestinian state, a land base that is just 22 percent of original Palestine before the establishment of Israel?

“One world, either that of the settler or that of the native, must be destroyed to bring the colonial system to an end. Not simply a military defeat or a political deal — the total destruction of the other mode of living.”

As the Israelis continue to steal Palestinian land, murder, degrade and humiliate Palestinian people, and create “facts on the ground” that make it impossible to establish a viable, independent Palestinian state, it is becoming clear that the only solution to the original sin of the Zionist project is authentic decolonization where the presence, humanity and sovereignty of the colonized is restored.

So while some Palestinians and their supporters still hope for a two-state solution, Israeli rulers also understand Fanon’s position that “only one mode of living will survive” and are moving to destroy Palestinian resistance. This is the real story of Gaza and all of the occupied territories — an ongoing crime that degrades all of us who are forced to witness it.

*Ajamu Baraka is a human rights defender whose experience spans three decades of domestic and international education and activism. A veteran grassroots organizer, his roots are in the Black Liberation Movement and anti-apartheid and Central American solidarity struggles.

Baraka has provided human rights trainings for grassroots activists across the country, briefings on human rights to the U.S. Congress, and appeared before and provided statements to various United Nations agencies, including the UN Human Rights Commission (precursor to the current UN Human Rights Council). He is also a contributing writer for various publications including Black Commentator, Commondreams, Pambazaka, People of Color Organize and Black Agenda Report.