Canada, the US and Ukraine were the sole countries that voted against the United Nations anti-Nazi resolution condemning the glorification of National Socialism and Nazi collaboration. Germany, Britain and the other EU countries where, with growing frequency, notorious Nazi collaborators are being publicly honoured, “abstained.”

Mass protests on April 26, 2007 against the removal of the famed Bronze Soldier of Tallinn, a World War II memorial commemorating the liberation of Estonia from Nazi Germany. Police cordon off the statue . The sign says “archeological excavation”. | Leena Hietanen, Wikimedia Commons (Click to enlarge)

BERLIN/NEW YORK (Own report) – The Federal Republic of Germany refused to vote in favour of a United Nations resolution condemning the glorification of National Socialism and Nazi collaboration. Last week, the Third Committee of the UN General Assembly passed a resolution strongly criticizing the edification of memorials to Nazi functionaries and the stylization of Nazi collaborators as “freedom fighters.” Germany and the other EU nations abstained, the USA, Canada, and Ukraine voted against the document, with 115 nations voting in favour. Berlin and Brussels use the excuse of not wanting to support a resolution initiated by Russia. In fact, a vote in favour of the document would have caused hefty disputes within the EU, and between the EU and important allies. With growing frequency, notorious Nazi collaborators are being publicly honoured in such EU countries as Hungary or the Baltic countries and in Ukraine, in some cases by officials of the respective governments.

The UN resolution expresses its “deep concern about the glorification, in any form, of the Nazi movement, neo-Nazism, and former members of the Waffen SS organization.” As examples the document names erecting monuments and memorials and holding public demonstrations in the name of the glorification of the Nazi past but also by “attempting to declare such members and those who fought against the anti-Hitler coalition and collaborated with the Nazi movement participants in national liberation movements.” The resolution explicitly “emphasizes that any commemorative celebration of the Nazi regime, its allies and related organizations, whether official or unofficial” should be prohibited by UN member states. The resolution especially expresses its condemnation “of any denial or attempt to deny the Holocaust.”[1]

Last Friday, when the Third Committee of the UN General Assembly put the resolution to a vote, the German Ambassador to the UN found himself unable to cast his vote in favour. All other EU nations also abstained, along with countries, dependent, in one way or the other, on the EU, such as Andorra, Bosnia-Herzegovina or Mali. Ukraine, the United States, and Canada voted pointblank against the resolution. The latter two countries are sheltering rather influential Ukrainian exile communities, characterized by former Nazi collaborators of the “Organization of Ukrainian Nationalists” (OUN). The reason generally given last Friday was that they did not want to support a resolution initiated by Russia. The Soviet Union – of which Russia had been its core – was the country accounting for the most casualties from Nazi terror – 27 million. However, had Germany and the other EU nations voted in favour of the resolution, it would have necessarily caused hefty disputes. Today, collaborators, who had joined the Nazis in the war against Moscow, are commemorated in several European countries.

In the struggle against Russia 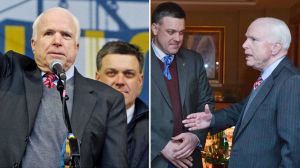 When warmongering US Senator John McCain dined with Ukraine’s opposition leaders on December 12, 2013, he shared a table and later a stage with the leader of the neo-Nazi Svoboda party Oleh Tyahnybok.

This is particularly true of Ukraine, where, since early 2012, German organizations have been working – and intensively so, since 2013 – to incorporate the Svoboda Party and its affiliated forces into an anti-Russian alliance of organizations. (german-foreign-policy.com reported.[2]) Svoboda honours the OUN and particularly its commander Stepan Bandera, who is very popular throughout West Ukraine. In 1941, Bandera’s militias actively supported Nazi Germany in its attack on the Soviet Union. Svoboda also honours the “Ukrainian Partisan Army” (UPA), which, in the wake of the German war of extermination, had participated in mass murders of European Jews.[3] 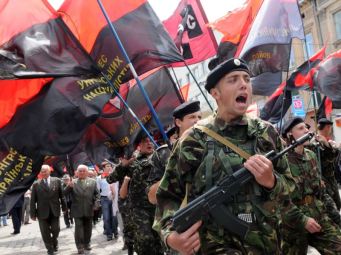 In the course of the Maidan protests, both this party and other fascist organizations, receiving vigorous support from Germany, were playing a growing role. Consequently, since the end of February, Svoboda has had several ministers in the Ukrainian putsch regime.

Today, fascist battalions are among the most resolute combatants in East Ukraine’s civil war. Some of their commanders have been elected to parliament in the Verchovna Rada on electoral tickets of the parties forming the future government. At the beginning of the month, an activist of the fascist “Right Sector” and deputy commander of the fascist “Asov Battalion,” had been named police chief of the District of Kiev. In their struggle against Russia, Ukraine is uninhibitedly developing the traditions of its anti-Soviet Nazi collaboration – at the side of Germany.

In what has become an annual event in Riga, Latvia in recent years, supporters of Latvian Waffen SS troops hold a commemorative march on March 16, 2014. The support for Nazism and the rehabilitation of war Nazi criminals throughout Europe in the context of the U.S. imperialist aggression, war and attempts to isolate Russia underscores the necessity of the anti-Nazi resolution at the UN.

Nazi collaborators are also being honoured in EU member countries, for example, in the Baltic nations. Regular commemoration honour parades for the Waffen SS, sponsored by their national Waffen SS veterans are organized in Estonia, Latvia, and Lithuania. In Latvia, one of the most recent marches was held last spring, with approx. 2,000 participants – which, in proportion to the size of the population, would correspond to a demonstration of 80,000 in Germany. Observers point out that in Riga’s state-run Latvian “Occupation Museum” the Latvian Waffen SS militias are referred to as “freedom fighters” in the struggle against Moscow. Organizers of the Waffen SS memorial march are invited to schools to teach courses in “patriotism.”[4]

The “All for Latvia” national alliance party, which has consistently been in the government since 2011, supports these memorial parades. The party recurringly raises the issue of the deportation (“repatriation”) of the country’s Russian-speaking minority. One of the party’s leaders had once declared that the Russian minority – nearly one quarter of the population – are “occupiers” or “illegal colonialists.” A critical appraisal of Nazi collaboration is not welcome in this country. As the historian Maris Ruks notes, Latvian scholars risk “setbacks in their careers, if they engage in too detailed research into the Holocaust.”[5] In the current confrontation with Russia, the Baltic countries are among the EU’s most aggressive forces.

Hitler’s partner is being rehabilitated

Also in Hungary fascist traditions are becoming more prevalent. Showcase examples are the new memorials to the “Reich’s Deputy” and Nazi collaborator Miklós Horthy, which have been inaugurated since 2012. After changing the name “Freedom Square” to “Horthy Square,” in April 2012, in Gyömrö, near Budapest, a Horthy statue was erected in the village of Kereki in southern Hungary.[6] A Horthy commemorative plaque was installed on its premises of the Calvinist College in Debrecen in May 2012. Other memorials have followed. For example, in June 2013 in the East Hungarian village of Hencida [7] and in November of the same year right in Budapest. “Hitler’s Hungarian partner is being rehabilitated,” wrote German press organs back in 2012, attentively noting that, at Hitler’s side, Horthy had led Hungary “into war against the Soviet Union.”[8] However, currently, Hungary is not one of those countries taking a particularly aggressive stand toward Russia.

The rehabilitation of Nazi collaborators extends far beyond Horthy. Since the 1990s, there have been many commemorative plaques dedicated to the ethnic, anti-Semitic writer, Albert Wass, who had been a loyal follower of Horthy and the Nazi Reich. His writings have been as accepted into the country’s curriculums as those of Jozsef Nyiro, who still in 1944 was active in the Nazi Arrow Cross Party.[9] Hungary’s “Jobbik” Party – which polled 20.5 percent in the April 6, 2014 elections, its greatest success ever – stands in the tradition of the Arrow Cross Party.

This is hardly an exhaustive list of EU countries publicly honouring Nazi collaborators. In Croatia, for example, monuments to Nazi opponents were destroyed, while, streets were being named after Mile Budak, the fascist Ustasha’s leading propagandist and, for awhile, Croatia’s Foreign Minister during the period of Nazi collaboration.

In Italy’s Affile, to the east of Rome, a mausoleum to the fascist war criminal, Rodolfo Graziani was inaugurated in 2012. Graziani, who had initially been engaged in “counter insurgency” in Libya, ordered hostages shot and used poisoned gas in Ethiopia. Toward the end of the war, he was having Italians executed for refusing to collaborate with the Nazi puppet regime in Salò.

Had Germany and the other EU countries not refused to vote in favour of last Friday’s UN resolution, they would – had they taken the document seriously – be facing serious conflicts with one another and with their close allies, e.g., their partners in Ukraine.