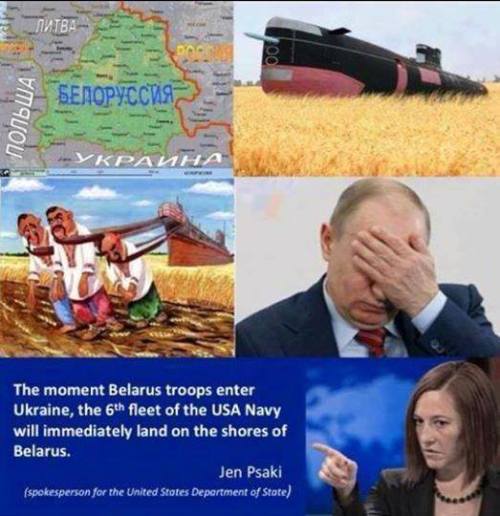 It is all too reminiscent of former prime minister Jean Chrétien trying to convince the Canadians in 2001 that the deployment of the Canadian navy to the Indian Ocean as part of the Anglo-American invasion of landlocked Afghanistan was done to fight the Taliban. And like current Canadian foreign affairs minister John Baird, who thinks the capital of Syria is Washington, U.S. Secretary of State Spokesperson Jen Psaki reveals a certain gap of knowledge of the countries targeted by US warmongering.

On April 10, this imperialist female misspoke and immediately corrected herself, when describing energy flows in Europe:

The imperialist speaks from a preconceived ideological and political outlook, rather than seeking truth from facts. The dogmatic rendering of reality was further revealed on May 12, when Psaki denounced the practice of “carousel voting” during the referendums in Donetsk and Luhansk. When a reporter asked her to define the term, however, Psaki was unable to do so. (Russians are understandably more familiar with this form of voter fraud, as it was widely reported in the 2011 parliamentary elections.) But she condemned it anyway.

In Russia this is being called “psaknut’” (“to Psaki” or “Psakiing”), which means roughly “to say something stupid with an air of cleverness.”

On June 5, after reports surfaced that Psaki had been replaced, Russia’s Permanent UN Representative, Vitaly Churkin, got in on the fun; he told reporters that he “doesn’t know where Psaki has gone off to,” but hopes she will “appear again,” as he’s always “found it very interesting to listen to her.”

A slideshow on RT’s website shows Psaki’s so-called “most embarrassing fails,” highlighting moments from her press briefings that Internet users have mocked and criticized.

The problem isn’t merely with the employees. Her boss invented the country of “Kyrzahstan” before going on to berate it for the lack of democracy. While delivering a patriotic speech at a university in the country of Kyrgyzstan in 2013, US Secretary of State John Kerry proudly talked about the “brave US representatives’ support for democratic changes in ‘Kyrzahstan’.” Moreover, he pontificated that it will take a long time for “Kyrzahstan” to pass to democracy.

What can one say about a country which give its citizens the name of an entire hemisphere and proudly calls them Americans rather than the more correct USSIANS? US President George W. Bush’s ignorance was common, and not just of small countries in Central Europe or Central Asia. In 2000, during his first campaign for the presidency, Bush enthusiastically answered questions about non-existent Canadian Prime Minister “Jean Poutine”  from Rick Mercer of the CBC’s 22 Minutes comedy program. One of Mercer’s routines was Talking to Americans, in which he would travel to a major US city or institution and conduct on-the-street interviews with average Ussians regarding Canadian politics, the weather, etc., often with hilarious results as the subject’s ignorance about Canada was illustrated. Bush was not amused when he was exposed, and thereafter refused to accept interviews from the CBC. Bush’s ignorance was not exceptional. Bush confused Austria with Australia, Iran with Iraq and several times astounded the world by being unaware of the location of many other countries.

On another occasion Mercer got the support of Arkansas Governor Mike Huckabee in calling on Canadians to save the “National Igloo.” In the same US election campaign, Mercer asked Democratic candidate Al Gore to promise to visit the “Canadian capital city” of Toronto after his election. Gore did not question Mercer’s incorrect identification of the capital of Canada. After the 9/11 attacks, either the CBC or Mercer decided that mocking the US was off-limits, and the routine was cancelled.

Imperialist geography is not an individual affair, however. What can be said about something which creates its own nature?  In 1848, Marx and Engels pointed out in The Communist Manifesto that since the rise of capitalism, the bourgeoisie has striven to force every corner of the world to remake itself “after its own image,” endeavouring to show that it has existed since eternity. 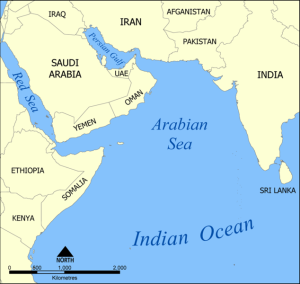 US politicians and agencies not only have problems locating countries but also relocate geography according to their imperialist interests. In 2008, Google Earth labelled the body of water between the Iranian Plateau and the Arabian Peninsula that you learned as the “Persian Gulf” as the “Arabian Gulf.”

At the time the National Iranian American Council said that the learned academicians of the National Geographic Society “made the same error” in 2004, although it willingly corrected itself after the NIAC complained. (You can read their 2008 letter here.)

It turns out that this small “error” is the official policy of the U.S. armed forces.

The U.S. Navy’s official  “styleguide” has been amended to remove “Persian” and adopt “Arabian Gulf” as the official term.

In 2012, US assistant secretary of political-military affairs, Andrew Shapiro, when announcing a massive sale of arms to the feudal Saudi Arabian dictatorship,.specifically used the term.

Wikipedia points out that, according to Mahan Abedin of the Jamestown Foundation, the first proposal to change the name to the “Arabian” Gulf goes back to the 1930s by Sir Charles Belgrave, then the British adviser to the ruler of Bahrain; however it was rejected immediately by the British government. In 1957, a few years after the nationalization of the Anglo-Persian Oil Company, an alleged British MI6 officer named Roderick Owen published a book named The golden bubble: Arabian gulf documentary making it the first literature in modern history to use the term “Arabian Gulf.”

The name Persian Gulf is recognised as the legal international standard  by the United Nations, which says

any change, destruction, or alteration of the names registered in historical deeds and maps is like the destruction of ancient works and is considered as an improper action. Therefore, the names of geographical features profiting from a unique historical identity, should not be utilised as political instruments in reaching a political, tribal, and racial objective, or in any clash with national interests and other’s values

Wikipedia points out that

On almost all maps printed before 1960, and in most modern international treaties, documents and maps, this body of water is known by the name “Persian Gulf.” This reflects traditional usage since the Greek geographers Strabo and Ptolemy, and the geopolitical realities of the time with a powerful Persian Empire (Iran) comprising the whole northern coastline and a scattering of local emirates on the Arabian coast. It was referred to as the Persian Gulf in the Arabic Christian writer Agapius, writing in the 10th century. 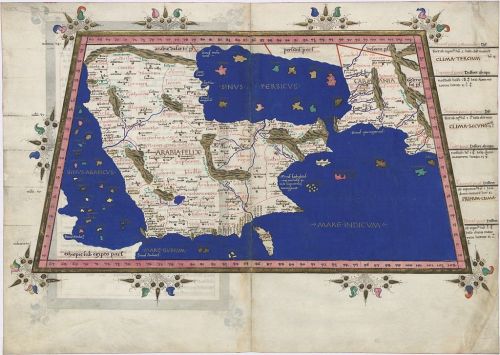