Banner at the People’s Summit (see below) expresses rejection of U.S. imperialist striving for domination.

The Seventh Summit of the Americas organized under the auspices of the Organization of American States (OAS) was held on April 10 and 11 in Panama City, Panama. The theme to be addressed at the gathering was “Prosperity with Equity: The Challenge of Cooperation in the Americas.” The firm stand of the Latin American and Caribbean nations’ heads of state gave this theme full meaning by emphasizing that the striving of U.S. imperialism for domination would no longer be accepted. Renewal Update

Cuban President Raul Castro put it clearly in a meeting with U.S. President Obama. Castro expressed Cuba’s readiness to engage in dialogue on the basis of respect and peaceful coexistence. Everyone at the summit echoed this willingness to have relations with the U.S., but only on a firm footing of equality and mutual respect.

Bolivian President Evo Morales told the Summit, “We are no longer submissive. No longer can coups be imposed in our countries, as we are a region seeking to determine its own future. We are no longer in the shadow of U.S. imperialism, as we say what we think and we do what we say. We ask that you respect our democracy and our sovereignty.”

Rafael Correa, President of Ecuador declared, “The time has come for the second and final independence of our Americas.”

At the Summit the Venezuelan President, Nicolas Maduro presented 11 million of the total 13 million petition signatures collected to date calling for U.S. President Barack Obama to withdraw sanctions against the country. He gave Venezuela’s invitation to Obama to work to “resolve the problems we have between us, in peace, without any intervention in internal matters.”

The U.S. and Canadian governments broke the unity by disagreeing with the other states on a final declaration, which was consequently not issued. They specifically opposed references to strengthening the protection of collective rights and a call for states to have greater obligations towards citizens. Despite Prime Minister Stephen Harper’s attempts to present Canada as a champion of peace and democracy, he stood on the sidelines announcing more government support for mining companies and neo-liberal free trade.

Prime Minister Harper disgraced himself when, after his longstanding position to exclude Cuba from Summit meetings collapsed in failure, he pleaded that he had “become convinced that a different approach is appropriate.” So too the U.S., which originally organized the OAS to exclude and isolate countries on the basis of Cold War definitions, has been forced to attend the meetings on the terms established by the Latin American and Caribbean countries. The strength of the Latin American and Caribbean peoples was such that both the U.S. and Canada were forced to behave and accept the situation.

For more information about the seventh Summit of the Americas, see this supplement produced by TML Weekly, the weekly newspaper of the Communist Party of Canada (Marxist-Leninist).

Alongside the Summit of the Americas, a People’s Summit of more than 3,500 representatives of social movements was convened to discuss issues of concern to the peoples of Latin America and the Caribbean. Participants in the People’s Summit included representatives of organizations of workers, peasants, indigenous peoples, students, women and other social and popular movements.

The People’s Summit was marked by a deepening unity of Latin American peoples to affirm that the old tricks of U.S. imperialism in the south are no longer acceptable. This was reflected by its declaration, which expressed support for declaring Latin American and the Caribbean a Zone of Peace.

Renewal Update is publishing the text of the People’s Summit declaration which highlights the issues of concern to the people of Latin America and the Caribbean with whom Canadians share the desire for peace, sovereignty and democracy. 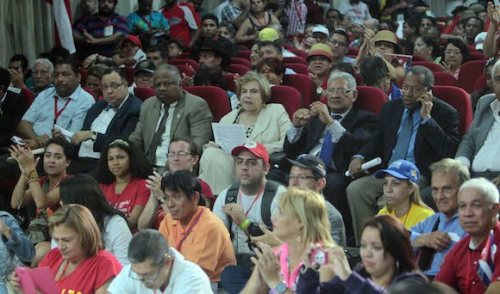 Inauguration of the People’s Summit in Panama | Ismael Francisco/Cubadebate

We, the Peoples of Our America, at the Peoples’ Summit met at the University of Panama April 9, 10 and 11, 2015, with more than 3,500 delegates representing hundreds of our organizations of workers, unions, peasants, indigenous peoples, students, women, and social and popular movements.

In the framework of unitary, fraternal and solidaristic discussions, the participants in conferences and 15 workshops of the Peoples’ Summit 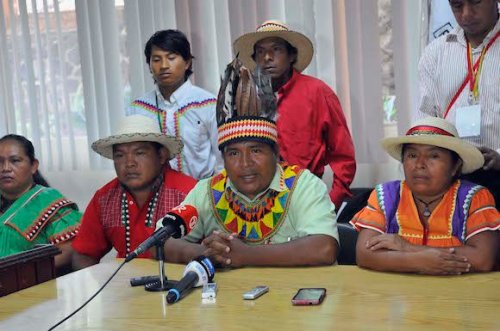 We, the Peoples of Our America, express our strong support for the Declaration of Latin America and the Caribbean as a Zone of Peace and free from colonialism, as was agreed unanimously by all the governments of the Americas in January 2014 at the Second Summit of the Community of Latin American and Caribbean States (CELAC).

In this regard, we reject military aggression and threats by the United States and their strategic allies carried out throughout the region through military bases, operational sites and similar facilities, which in the past four years alone have gone from 21 to 76 in Our America, 12 of which are in Panama and we demand the repeal of the Neutrality Treaty, which permits U.S. military intervention in the Republic of Panama.

Iraq, Afghanistan, Somalia, Palestine, Mali, the Central African Republic, Syria, Ukraine, Nigeria, Pakistan, Congo, Mauritania, Libya and Yemen are just some of the latest U.S. military interventions with their consequence of death and desolation. We do not want this situation in our America.

We therefore support the statements by the General Secretariat of UNASUR [Union of South American Nations] requesting the exclusion of all military bases from our Region of Peace and affirming that no country has the right to judge the conduct of another and much less to impose sanctions or punishments on their own. 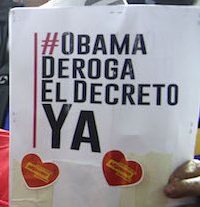 We, the Peoples of America, support the Cuban people and their Revolution, we salute the homecoming of the five Cuban heroes, a product of international solidarity and the tireless struggle of the people. We demand, along with all governments in the world, the immediate and unconditional lifting of the criminal blockade against the Republic of Cuba by the U.S. government and the immediate closure of the Guantanamo Bay military base without further conditions than that of respect for International Law and the United Nations Charter.

We, the Peoples of America, express our unconditional and unbound support to the Bolivarian Revolution and the legitimate government led by comrade Nicolas Maduro.

Therefore we reject the unjust, immoral and interventionist Executive Order by the government of the United States that seeks to label Venezuela as a threat to their national security and has already been unanimously rejected by all countries of the Americas.

We the Peoples of America, reaffirm that Puerto Rico is a Latin American and Caribbean nation with its own distinct identity and history, whose rights to independence and sovereignty are violated by a colonial tutelage imposed arbitrarily for over a century by U.S. imperialism on that historic struggle for sovereignty and self-determination for Puerto Rico, from which many are in prisons, such as Oscar López Rivera, for whom we demand immediate release.

We the Peoples of America, reaffirm our support, solidarity and hope for the peace talks in Colombia, being held between the Government of Colombia and the FARC-EP; we request the opening of similar talks with the ELN to facilitate the construction of a firm and lasting peace process, with social justice. We welcome the steps taken by various governments to facilitate the success of this process.

We the Peoples of America, reiterate our permanent and unconditional support to Argentina in its efforts to recover the Malvinas Islands, as well as our support for the Plurinational State of Bolivia in its just and deferred aspiration for its own sea access. We demand the immediate withdrawal of the occupying troops in Haiti, an act that will permit its self-determination. We demand the government of Mexico produce the 43 student teachers alive, who were forcibly disappeared in Ayotzinapa.

We, the Peoples of the Americas, express the urgent need for the construction and deepening of a new society with social justice and gender equality, with the active participation of youth and of the various social actors, with solidarity as a basic principle for a comprehensive and sovereign development of our peoples. Today in our America there exist some imperialist lackeys trying to sustain and impose the neoliberal model as the solution to the problems and needs of our people – a model that has proven to be the most effective instrument for deepening poverty, destitution, inequality, exclusion and the most unfair distribution of wealth known today.

In this situation we call to fight for and defend our natural resources, biodiversity, food sovereignty, our common goods, Mother Earth and the defence of the ancestral rights of indigenous peoples and the conquered and social rights – fight for jobs, dignified working and living conditions, social security, pensions, collective bargaining, organizing, the right to strike, freedom of association, occupational health and safety, economic and social rights, respect for migrants and afro descendants, the elimination of child and slave labour, justice, gender equity.

All this is and will be possible if we work in unity and with the objective to build a balance of forces capable of replacing the dominant power with another that defends the interests of our peoples.

Ten years following the defeat of the FTAA [Free Trade Agreement of the Americas] we reaffirm our fight against new forms of free trade agreements FTA [Free Trade Agreement], TPC [Trade Policy Committee], TISA [Trade in Services Agreement], and the Trans Pacific Alliance. Thus we also maintain that our countries’ external debt is uncollectible and unpayable as well as illegitimate and immoral.

We, the Peoples of America, welcome the integration process that puts the self-determination and sovereignty of our people in first place, processes such as ALBA [Alliance for the Peoples of Our America] and CELAC [Community of Latin American and Caribbean States], processes that have strengthened Latin American unity. We need to complement these processes with the participation of social, trade union and grassroots organizations to promote further integration of and for the people.

(Translated from the original Spanish by Renewal Update.)