Stephen Harper loves the smell of napalm in the morning

GOING after the Ukrainian vote in Canada is one thing. But sending troops, even as trainers, into Ukraine’s “fratricidal” civil war and confronting Russia is quite another. If this thing goes sideways, he may wish he had sent diplomats instead of military advisors.

Has anyone told the PM that these are not toy soldiers he is dispatching — by the hundreds no less — but flesh and blood human beings?

This is an old story. From his opposition days, this leader has exhibited a fatal instinct to take it to the parking lot. The itchy trigger finger initially showed up in the second Iraq War. Cooler heads in the Chretien government scuppered his ill-informed bellicosity. Canada refused to join President George W. Bush’s coalition of the misguided.

But that didn’t stop Harper from dropping editorial bombs in the Wall Street Journal. He slammed Chretien, declaring that it was a mistake for Canada not to join in Bush’s necktie party for Saddam Hussein. 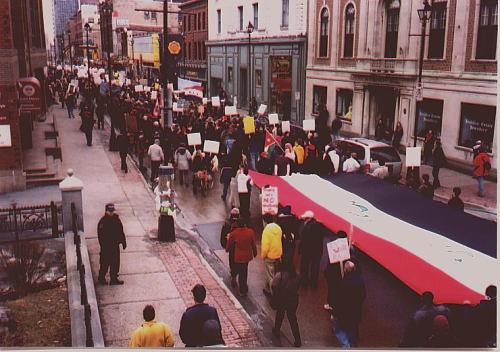 On Saturday, March 22, 2003 over 3,000 people in Halifax demonstrated against the war on Iraq, promoted by Harper, in open sympathy with the Iraqi people

Despite then U.S. Secretary of State Colin Powell’s cartoonish show-and-tell at the UN, Harper bought into the notion that Iraq had weapons of mass destruction. When it became clear that it didn’t, that theory morphed from the basis for war into low humour — George Bush crawling around the floor of the Oval Office looking under the furniture for those darned weapons of mass destruction. A million dead Iraqis and 4,500 dead Americans didn’t get the chance to appreciate his sense of humour.

After taking power in 2006, the Field Marshal no longer had to complain in a U.S. newspaper about lost opportunities to go to war. Now he simply ordered in the troops.

The Harper government has poisoned the relationship with a nuclear and economic superpower over a two-year training program that could end in a hasty tail-between-our-legs Monty Python-esque retreat.

In Afghanistan, he took over the mission “when it kicked into high gear”. One hundred and fifty-eight Canadian soldiers, a diplomat and a journalist died there. Harper kept saying it was a “vital” war and that Canada would not “cut and run.” That statement marked a new low in the history of plagiarism; Harper was stealing from a semi-literate, overachieving frat-boy; George W. Bush.

As support for the war waned, the PM lost his zeal for power-politicking in Kandahar. A decade and more of futility was apparently enough. So the soldiers came home, the Taliban came back, and Afghanistan came undone. Somehow, we had managed to add a few more tatters to the ragged fabric of that dysfunctional country. Canadians picked up the tab of $18 billion and of course Canada’s wannabe commander-in-chef declared victory.

In 2014, Afghanistan recorded 10,000 civilian casualties, the highest number since the U.N. began keeping records in 2009. This past Saturday, 35 were killed and 125 injured as bombs went off in Jalalabad. Meanwhile, in the southeastern part of Afghanistan, there were five beheadings and officials wonder if the country’s “black holes in governance” have opened the door to ISIS. Six months after a new president was elected, there is is still no cabinet. Some victory.

And then there was the Harper government’s deplorable treatment of the returning soldiers from this feckless war. Disabled veterans and those wrestling with the demons of Post Traumatic Stress Disorder found themselves battling their own government for assistance.

A delegation of veterans from across Canada arrives on Parliament Hill to meet with Harper’s Minister of Veterans Affairs Julian Fantino, January 28, 2014, only to be treated with utmost disrespect. (Click to enlarge)

A view of the large rally in Sydney, Cape Breton on Nov. 9, 2013 demanding that government provide public service to veterans. One of many actions held by veterans and public sector workers, members of PSAC, they condemned the decision of the Harper government to close nine veterans’ treatment and service centres.

Harper cut $226 million from the operational budget of Veterans Affairs, shuttered nine of their treatment and service centres, and insisted the wounded and distressed would get better service with fewer facilities. Conservative logic at its finest.

His government also went to court against a group of damaged Afghanistan veterans who claimed that there was a social contract that obliged Ottawa to look after them. They declared the New Veterans Charter to be a sellout.

Now that Harper is in election mode, concessions are being made to veterans. There is a hiring blitz to replace some of the personnel who were foolishly cut in the budget balancing process. There is even talk that the court case between Equitas and Ottawa over the New Veterans Charter might be settled. The question remains how sincere these concessions actually are, and whether veterans will forgive the previous indifference of the government to their fate.

The Field Marshall also took the fighter jets to Libya, where the promise from NATO was that they were not bombing for regime change, but merely to protect opponents of the Libyan government from “genocide” in that country’s civil war.

Hellfire rained down on the African nation for seven months. NATO called the Canadian-commanded mission a picture-perfect aerial campaign. Despite the claim that the mission was not about toppling the Libyan government, it ended with Muammar Gaddafi being publicly sodomized with a bayonet. U.S. Secretary of State Hillary Clinton re-wrote the definition of sang froid. “We came, we saw, he died.” So too did at least 70 non-combatants who were killed by NATO bombs, including 24 women and children.

Back in Canada, the Harper government commemorated the great “victory” by having a million dollar fly-over of Parliament by fighter jets. Peter MacKay’s chest swelled up like a party balloon. In Libya, meanwhile, the country deteriorated into a tribal war which now featured militant Islamist groups in the eastern portion of the country. Libya has since become a failed state featuring repression, lawlessness, and death squads.

With this “model” campaign behind him, Harper is now dispatching Canadian troops to Iraq to join the American-led coalition against the latest Islamist threat, ISIS. That group’s self-proclaimed “caliphate” was presented as the greatest threat the world had ever seen. The be-headers were coming. They might be awhile though, since their transportation is restricted to pick-up trucks. It is not yet known if any of them are amphibious.

The Field Marshall, with his new Commandant Kenney at his side, said there would be no boots on the ground. He declared that Canadian forces would not be accompanying Kurdish troops into battle. Both things happened and we recorded our first casualty of the Iraq War, Sgt. Andrew Dorion, killed by friendly fire.

The mission, you see, had “evolved.”

Though the Field Marshall had pledged that there would be no Canadian bombing inside Syria without the permission of President Assad, Canadian fighters are now doing just that.

Now it is evolving again – and is being extended. Though the Field Marshall had pledged that there would be no Canadian bombing inside Syria without the permission of President Assad, Canadian fighters are now doing just that. Who we are actually helping, whether it is Assad, moderate terrorists like Al-Qaida (yes, they too have evolved), or other anti-Assad militias, no one quite knows. It has that Libya feel to it.

But wait, there’s more. Now Harper has our troops on their way to Ukraine, where units like the “Christian Taliban” want to make a 13th-century-style march to Moscow. Rest assured that we won’t be joining them, Harper and Kenney insist. The Canadian troops are only there to train and assist the Ukrainian military and police.

Unless of course, the mission evolves.

But even there, Kenney had an assurance about what our troops will do. They will be far from the fighting. Should things change, the plan is to evacuate them from Ukraine through Poland.

Excellent. The Harper government has poisoned the relationship with a nuclear and economic superpower over a two-year training program that could end in a hasty tail-between-our-legs Monty Python-esque retreat.

The Russians have characterized Canada’s move as “deplorable”. It could also be described as ridiculous if it weren’t for the fact that a former Canadian diplomat, James Bisset, has warned that our troops may be training neo-nazi militia units that are being integrated into Ukraine’s regular military forces.

Apart from his military adventures, the Prime Minister is building on Canada’s new reputation as an arms merchant.

Apart from his military adventures, the Prime Minister is building on Canada’s new reputation as an arms merchant. On the heels of selling $15 billion in throng-controlling weapons to Saudi Arabia, Harper announced the sale of 3,000 tonnes of uranium concentrate to India, which is already a rogue nuclear power.

Harper’s assurance that this yellowcake will be used for peaceful purposes is empty. It is impossible to separate civilian nuclear power use from the military application. After all, India built the bomb surreptitiously back in 1974 with Canadian technology and materials. Thanks to their CANDU reactors, India has had the ability since 1998 to produce 300 kg of plutonium a year. It only takes about 8 kg to make a nuclear bomb. Note: India has yet to sign the nuclear non-proliferation treaty.

Just hours after the deal was consummated, India successfully test fired a nuclear-capable ballistic missile. One can only imagine how twitchy that will make Pakistan, also a rogue nuclear power. Since British India was partitioned in 1947 into Pakistan and India, the two countries have fought four wars, and continue to have regular border skirmishes to this day.

With four wars of his own under his belt (and let’s not give up on Iran), it is decisions like sending troops to Ukraine and selling uranium concentrate to a country whose mortal enemy just happens to be Muslim that makes the Field Marshall the statesman that he is.

*Michael Harris is a writer, journalist, and documentary filmmaker. He was awarded a Doctor of Laws for his “unceasing pursuit of justice for the less fortunate among us.” His nine books include Justice Denied, Unholy Orders, Rare ambition, Lament for an Ocean, and Con Game. His work has sparked four commissions of inquiry, and three of his books have been made into movies. His new book on the Harper majority government, Party of One, is a number one best-seller.