The U.S. National Security Archive[1] recently released a declassified report on the U.S. Strategic Air Command (SAC) Atomic Weapons Requirements Study for 1959, produced in June 1956. The report is a telling reminder of the depths of depravity and irrationality of the U.S. imperialists, who with their doctrine Might Makes Right, are willing to annihilate humanity in the name of containing communism and establishing global hegemony, aims which they continue to pursue today. What they achieved was the imposition of their irrationality on the world, based on the assumption that everyone else surely shared their depravity. These declassified documents are a sobering reminder that it is the U.S. which is the main culprit for nuclear proliferation and the major threat to peace and humanity in the world today.

Excerpts from the National Security Archive’s Electronic Briefing Book No. 538 on the SAC report are posted below. 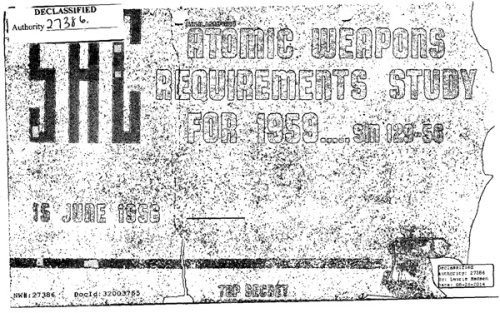 The SAC study includes chilling details. According to its authors, their target priorities and nuclear bombing tactics would expose nearby civilians and “friendly forces and people” to high levels of deadly radioactive fallout. Moreover, the authors developed a plan for the “systematic destruction” of Soviet bloc urban-industrial targets that specifically and explicitly targeted ‘population’ in all cities, including Beijing, Moscow, Leningrad, East Berlin, and Warsaw. Purposefully targeting civilian populations as such directly conflicted with the international norms of the day, which prohibited attacks on people per se (as opposed to military installations with civilians nearby). […]

The SAC document includes lists of more than 1100 airfields in the Soviet bloc, with a priority number assigned to each base. [The] Soviet bomber force [was] the highest priority for nuclear targeting (this was before the age of ICBMs [inter-continental ballistic missiles]) […]

A second list was of urban-industrial areas identified for “systematic destruction.” SAC listed over 1200 cities in the Soviet bloc, from East Germany to China, also with priorities established. Moscow and Leningrad were priority one and two respectively. Moscow included 179 Designated Ground Zeros (DGZs) while Leningrad had 145, including “population” targets. […]

The report’s detailed introduction explained that the priority given to Air Power (BRAVO) targets dictated the surface bursting of high-yield thermonuclear weapons […] including airbases in Eastern Europe. That tactic would produce large amounts of radioactive fallout compared to bursting weapons in the air. According to the study, “the requirement to win the Air Battle is paramount to all other considerations.” […]

SAC planners placed “prime reliance” on blast effects, finding that thermal and radiation effects were “relatively ineffective.” […] The resulting “blast frame” of mind overlooked the significant devastation caused by other nuclear weapons effect such as radiation and mass fires.

Believing that a “favorable decision may be reached in the initial stages” SAC thought it essential to achieve high levels of damage. […]

[… I]f fighting continued once the air power battle was over, the second phase of the war was to be the “systematic destruction” of Soviet bloc war-making potential. The “final blows” in the bombing campaign would strike “basic industries” – those industries and economic activities which most contributed to war-making capability. […] Toward that end, SAC would drop atomic bombs, not H-bombs, on large numbers of specific installations in designated urban-industrial areas. […] The explosive yields of these bombs were likely to exceed by far the requirements of destroying specific targets in the systematic destruction mission, such as power plants or transportation nodes.

Moscow, the number one urban target, had around 180 installations slated for destruction; some were in the air power category, but many involved a variety of industrial activities, including factories producing machine tools, cutting tools, oil extraction equipment, and a most vital medicine: penicillin. […]

What is particularly striking in the SAC study is the role of population targeting. Moscow and its suburbs, like the Leningrad area, included distinct “population” targets […] So did all the other cities recorded in the two sets of target lists. In other words, people as such, not specific industrial activities, were to be destroyed. […]

[… A]ttacks on civilian population per se were inconsistent with the standards followed by Air Force leaders. While they were willing to accept mass civilian casualties as a consequence of attacking military targets, as was the case during the Korea War, they ruled out “intentional” attacks on civilians. Moreover, attacks on populations violated international legal norms of the day, which were summarized in the then-unratified Hague rules on aerial warfare (1923). Nevertheless, such targeting rules were not in force until the 1977 agreement on the Additional Protocols to the Geneva Convention (1949). The United States, however, has consistently refused to accept claims that the targeting standards of the Additional Protocols apply to the use of nuclear weapons. […]