The Martin Luther King you don’t see on TV

From our archives. By JEFF COHEN and NORMAN SOLOMON* 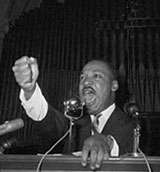 It’s become a TV ritual: Every year in mid-January, around the time of Martin Luther King’s birthday, we get perfunctory network news reports about “the slain civil rights leader.”

The remarkable thing about this annual review of King’s life is that several years – his last years – are totally missing, as if flushed down a memory hole.

What TV viewers see is a closed loop of familiar file footage: King battling desegregation in Birmingham (1963); reciting his dream of racial harmony at the rally in Washington (1963); marching for voting rights in Selma, Alabama (1965); and finally, lying dead on the motel balcony in Memphis (1968).

An alert viewer might notice that the chronology jumps from 1965 to 1968. Yet King didn’t take a sabbatical near the end of his life. In fact, he was speaking and organizing as diligently as ever.

Almost all of those speeches were filmed or taped. But they’re not shown today on TV.

It’s because national news media have never come to terms with what Martin Luther King Jr. stood for during his final years.

In the early 1960s, when King focused his challenge on legalized racial discrimination in the South, most major media were his allies. Network TV and national publications graphically showed the police dogs and bullwhips and cattle prods used against Southern blacks who sought the right to vote or to eat at a public lunch counter.

But after passage of civil rights acts in 1964 and 1965, King began challenging the nation’s fundamental priorities. He maintained that civil rights laws were empty without “human rights” – including economic rights. For people too poor to eat at a restaurant or afford a decent home, King said, anti-discrimination laws were hollow.

Noting that a majority of Americans below the poverty line were white, King developed a class perspective. He decried the huge income gaps between rich and poor, and called for “radical changes in the structure of our society” to redistribute wealth and power.

“True compassion,” King declared, “is more than flinging a coin to a beggar; it comes to see that an edifice which produces beggars needs restructuring.”

By 1967, King had also become the country’s most prominent opponent of the Vietnam War, and a staunch critic of overall U.S. foreign policy, which he deemed militaristic. In his “Beyond Vietnam” speech delivered at New York’s Riverside Church on April 4, 1967 – a year to the day before he was murdered – King called the United States “the greatest purveyor of violence in the world today.”

From Vietnam to South Africa to Latin America, King said, the U.S. was “on the wrong side of a world revolution.” King questioned “our alliance with the landed gentry of Latin America,” and asked why the U.S. was suppressing revolutions “of the shirtless and barefoot people” in the Third World, instead of supporting them.

In foreign policy, King also offered an economic critique, complaining about “capitalists of the West investing huge sums of money in Asia, Africa and South America, only to take the profits out with no concern for the social betterment of the countries.”

You haven’t heard the “Beyond Vietnam” speech on network news retrospectives, but national media heard it loud and clear back in 1967 – and loudly denounced it. Time magazine called it “demagogic slander that sounded like a script for Radio Hanoi.”” The Washington Post patronized that “King has diminished his usefulness to his cause, his country, his people.”

In his last months, King was organizing the most militant project of his life: the Poor People’s Campaign. He crisscrossed the country to assemble “a multiracial army of the poor” that would descend on Washington — engaging in nonviolent civil disobedience at the Capitol, if need be – until Congress enacted a poor people’s bill of rights. Reader’s Digest warned of an “insurrection.”

King’s economic bill of rights called for massive government jobs programs to rebuild America’s cities. He saw a crying need to confront a Congress that had demonstrated its “hostility to the poor” – appropriating “military funds with alacrity and generosity,” but providing “poverty funds with miserliness.”

How familiar that sounds today, more than a quarter-century after King’s efforts on behalf of the poor people’s mobilization were cut short by an assassin’s bullet.

As 1995 gets underway, in this nation of immense wealth, the White House and Congress continue to accept the perpetuation of poverty. And so do most mass media. Perhaps it’s no surprise that they tell us little about the last years of Martin Luther King’s life.

*This article was published in Shunpiking Magazine’s annual Black History Supplement, People’s Odyssey, in February/March 1999, and originally written in 1995. Jeff Cohen and Norman Solomon are syndicated columnists and authors of Adventures in Medialand: Behind the News, Beyond the Pundits (Common Courage Press).