He is on record as saying: “Britain is ready for a fascist leader… I think Britain could benefit from a fascist leader. … I believe very strongly in fascism… Rock stars are fascists, too. Adolf Hitler was one of the first rock stars…” 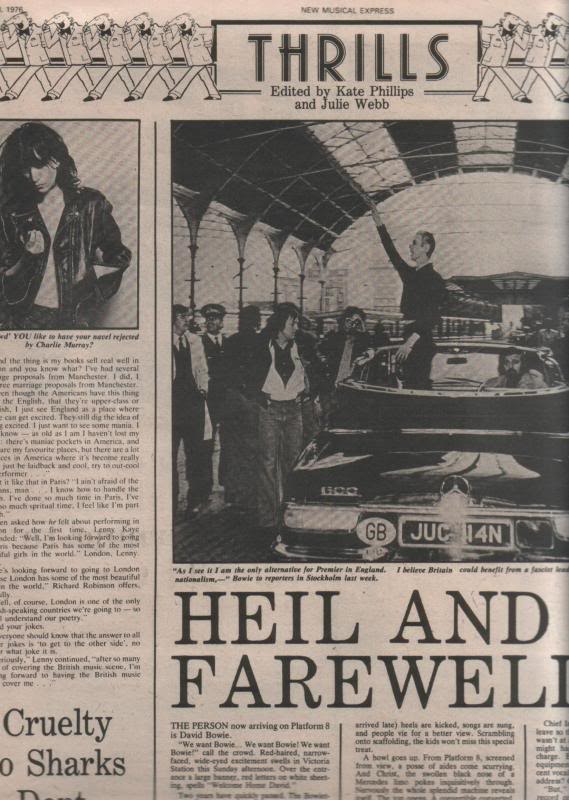 The death of David Bowie gave rise to a quite unprecedented outpouring in the media, including postings in the social media. Indeed, his figure was imbued with an almost god-like status, with even the suggestion that constellations in the heavens should be named after him. It was suggested that he used his voice for others who were ignored.

What was glossed over was his overt fascism during the 1970s. “Alternative” media tended to term this as a “brief flirtation”, to be transcended by his later transformations, that he was always a misfit and beloved for it.

It was in this context that Bowie took the side of fascism. He is on record as saying: “Britain is ready for a fascist leader… I think Britain could benefit from a fascist leader. … I believe very strongly in fascism. People have always responded with greater efficiency under a regimental leadership. Rock stars are fascists, too. Adolf Hitler was one of the first rock stars…You’ve got to have an extreme right front come up and sweep everything off its feet and tidy everything up.” (Playboy, 1976).

On his return from abroad in the same year, he gave a Nazi salute to his fans at Victoria Station. These words and actions cannot be explained away. In a sense, Bowie’s later recantation that he was “out of my mind, completely crazed”, only compounds the situation.

In The Musicians’ Union: A Social History, an account is given of the stand taken by Cornelius Cardew and others to have those who support fascism expelled from the MU:

“At a meeting on the 14th September 1976 Cardew moved that any members of the Union expressing fascist sympathies be expelled from the Union – though this was not carried, the Branch meeting vote resulting in a 12-12 tie.

“This branch deplores the publicity recently given to the activities and Nazi style gimmickry of a certain artiste [referring to Bowie – WWIE] and his idea that this country needs a right wing dictatorship. Such ideas prepare the way for political situations in which the Trade Union movement can be destroyed, as it was in Nazi Germany. The spreading of such ideas must be considered as detrimental to the interests of the Union and any necessary steps should be taken to prevent such ideas from gaining credence in the community. We propose, therefore, that any member who openly promotes fascism or fascist ideas in his/her act or recorded performance should be expelled from the Union.”

“A further motion, however, was passed by 15 votes to 2, at the next meeting of the branch on the 18th November 1976, stating that:

“When a pop star declares that he is ‘very interested in fascism’ and that ‘Britain could benefit from a fascist leader’ he is influencing public opinion through the massive audiences of young people that such pop stars have access to. Such behaviour is detrimental to the interests of the Union, since it prepares the ground for a political system in which the Trade Union movement can be smashed, as it was in Nazi Germany. This Central London Branch therefore proposes that any member who uses his professional standing or stage act or records to promote fascism should be expelled from the Union.”

To promote a rock star with such a background as David Bowie is to say that irrationalism and nihilism is what the youth should espouse and what popular culture should be about. It is in stark contrast to the stand and path taken by Cornelius Cardew himself who blazed a trail in music of enlightenment and progress.

The issue really is what should today’s popular culture be like. The hype and hysteria surrounding Davie Bowie assists in blocking sorting out this issue.

For example, the final album “Blackstar” drew such quotes as “David Bowie has rarely embraced clear meaning and on his new album … he’s as slippery as ever”. Its lead track was said to be about ISIS, which Bowie reportedly denied, as he denied ever making a Nazi salute. One review, headlined “The Beautiful Meaninglessness of David Bowie”, likens the album lyrics to surrealism, quoting with approval a description of the surrealists: “But above all, taking their lead from dreams and the unconscious, their work showed a deliberate rejection of reason.” The same review says that the final track “almost reads like a defence of a career of obscurantism”. Its lyrics typically read: “Seeing more and feeling less, Saying no but meaning yes, This is all I ever meant, That’s the message that I sent”.

The Guardian, writing on January 21 of the title track of “Blackstar”, which begins, “In the villa of Ormen …”, says, “Ormen also means serpent in Norwegian, a creature mentioned in the writings of the occultist Aleister Crowley, with whom Bowie was obsessed in the 1970s.” Another review says, “The imagery here is rich in Satanic overtones, something Bowie has flirted with in the past. In the 1970s, during his Thin White Duke phase, he became deeply engaged in the writings of occultist and novelist, Aleister Crowley, drawing pentagrams on the floor, fuelled by copious amounts of cocaine, peppers and milk.”

So fascism at the beginning of Bowie’s career, occultism at the end, and obscurantism throughout.

Perhaps Bowie’s most famous track is “Heroes” (the title is in quotation marks), co-written with Brian Eno. Wikipedia says that his performance of the song on June 6, 1987, at the German Reichstag in West Berlin was considered a catalyst to the eventual fall of the Berlin Wall. As the euphoria of that fall is now nowhere to be seen, one might guess that the hero-worship being promoted with Bowie’s death will similarly prove hollow and empty. Even in BowieÆs song, the reference to heroes is ironic. The lyrics have nothing to do with any heroic deeds performed in defence of progress and humanity. We can be heroes, just for one day, as lovers, “I, I will be king, And you, you will be queen”.

The wall to wall coverage given in all the media to David Bowie on his death is therefore inexplicable unless viewed as giving god-like status to what is most base, attempting to block the path to what would be a genuinely popular culture.