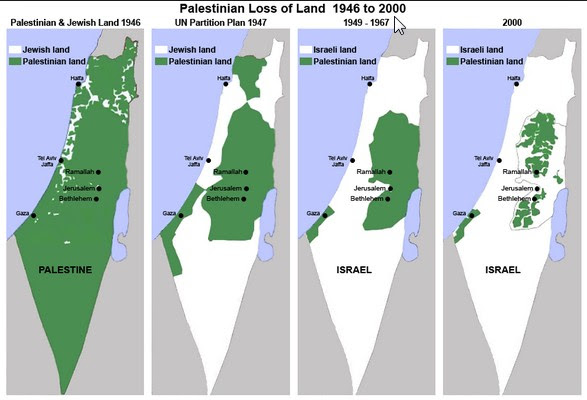 The maps, which appear in chronological succession in a US textbook on page 123, show Palestinian land loss from 1946, one year before Zionist militias initiated the displacement of more than 750,000 indigenous Palestinians from historic Palestine, to the year 2000, by which point Palestinian land had been reduced to a handful of tiny non-contiguous enclaves in the occupied West Bank and a sliver of Gaza. “The review determined that the map did not meet our academic standards,” McGraw-Hill spokesperson Catherine Mathis told Inside Higher Ed, adding, “We have informed the authors and we are no longer selling the book. All existing inventory will be destroyed. We apologize and will refund payment to anyone who returns the book.”

(March 21) –  What is the difference between a textbook publisher giving into pressure from Christian fundamentalists seeking to censor the teaching of evolution, and a publisher giving in to Zionists seeking to censor awareness of the ethnic cleansing of Palestine? Neither phenomenon is a matter of opinion or perspective. One act of censorship denies facts established by scientific research. The other denies the documented violation of international law (for instance, the Fourth Geneva Convention) and multiple UN resolutions. So the answer to the question just asked is – there is no difference.

In early March 2016 executives at McGraw-Hill took the extreme step of withdrawing from the market a published text, Global Politics: Engaging a Complex World, and then proceeded to destroy all the remaining books held in inventory. (Did they burn them?) Global Politics, which had been on the market since 2012, was a text designed by its authors to “offer students a number of lenses through which to view the world around them.” Why did McGraw-Hill do this?

Apparently the book was obliterated (this seems to be an accurate description of the publisher’s actions) because, like a biology text that describes the established facts of evolution, Global Politics offered a “lens to view the world” that was judged blasphemous by a powerful, influential and ideologically driven element of the community. Of course, that is not how McGraw-Hill rationalized its action. Instead, the publisher claimed that a serious inaccuracy in the text was belatedly discovered. This took the form of a series of four maps that show “Palestinian loss of land from 1946 to 2000.” The maps are the first set which can be seen at the following link:http://www.thetower.org/3027ez-mcgraw-hill-publishes-college-textbook-with-mendacious-anti-israel-maps/

Perhaps what the Zionists can’t abide is lining up the maps together in chronological order.

The maps in question are not new or novel. Nor are they historically inaccurate, despite Zionists’ claims to the contrary. They can be seen individually and in different forms on websites of the BBC and Mondoweiss and are published in a number of history books, such as Mark Tessler’s well-received A History of the Israeli-Palestinian Conflict. Perhaps what the Zionists can’t abide is lining up the maps together in chronological order.

In truth, the objections reported to have been used by those who pressured McGraw-Hill are historically perverse – the sort of grasping at straws that reflects a biased and strained rewriting of history. For instance, an objection was made to the labeling of public land in pre-1948 Palestine as “Palestinian.” Why? Because the Zionist claim is that Palestine before 1948 was a British mandate and so the land was British and not Palestinian. As their argument goes, “no one called the Arabs [of this area] Palestinians.” Of course, prior to 1948, no one called the East European Jews pouring in at this time “Israelis.” Further, according to those taking these maps to task, the West Bank at this time was controlled by Jordan and so it too was not Palestinian. Obviously, no one brought up the fact that in September of 1922 the British had divided Palestine in two in order to artificially create what is now Jordan. The period after World War I was one of territorial transition, however, in Palestine, the one constant was the persistent presence of the Arab Palestinians.

The Zionists offered many other dubious objections to the maps, which seem to have sent the publisher into something of a panic. It would certainly appear that no one at McGraw-Hill knew enough relevant history to make an accurate judgment on the complaints.

McGraw-Hill’s response was to “immediately initiate an academic review,” which “determined that the maps in question “did not meet our academic standards.” Who carried out the review? Well, McGraw-Hill won’t say, but insists those who did so were “independent academics.” Just what are McGraw-Hill’s “academic standards”? Well, those haven’t been articulated either. The publisher’s reluctance to elaborate its claims makes their actions suspicious at best.

As Rania Khalek noted in an 11 March 2016 article on the incident in Electronic Intifada, these particular maps, showing the loss of Palestinian land over decades of Israeli expansion, “have the ability to cut through Israeli propaganda that portrays Palestinian anger and violence as rooted in religious intolerance and irrational hatred rather than a natural reaction to Israel’s colonial expansionism, land theft and ethnic cleansing, all of which continue today.” This gives insight into the strenuous efforts made by Zionists to keep the sequenced maps away from any mass market distribution. As it is, they seem to have overlooked this textbook source for some four years. However, once they spotted it, and began “flooding” McGraw-Hill with complaints from “multiple sources,” it took the publisher only about a week to suspend sales of the book.

The next obvious question is why didn’t McGraw-Hill move to change the maps or just remove them? Why destroy the entire inventory? The extreme nature of the publisher’s response remains unexplained but may stand as a testimony to the fact that the Zionist lobby has the same power within the corporate ranks of this textbook publisher as the anti-evolution fundamentalists have over most biology textbooks.

The Zionists who made the claim that the Global Politics maps are “mendacious” do so from a starting assumption that all the land from the Suez Canal to Golan Heights and Jordan River has always been Hebrew-Israeli. On this basis they posit their own maps to make the claim that modern Israel, at least since 1967 and “in the pursuit of peace,” has voluntarily relinquished land rather than illegally taken it. These maps are the second set seen at http://www.thetower.org/3027ez-mcgraw-hill-publishes-college-textbook-with-mendacious-anti-israel-maps/

It is significant that the Zionist maps begin in 1967, a year of major Israeli expansion through conquest. And, of course, the only land concession of any consequence since then is the Sinai Desert. The Zionist cartographical suggestion that Israel has given up Gaza and West Bank land is just a sleight of hand, given Israel’s use of Gaza as a prison colony and continued military control of every inch of the West Bank.

Finally, it is important to note that Israeli school maps are often pure propaganda. For instance, the Israeli newspaper Haaretz recently carried a story about a map used to teach seventh graders about the country’s geography. The map omits the “green line,” which is recognized internationally as Israel’s eastern border, as well as the majority of the nation’s Arab-Israeli communities. Maybe the Israeli Ministry of Education used McGraw-Hill’s “academic standards” to create this map.

Within academia there is the belief that textbooks are not to be subject to ideological censorship. This is a rather naive, but important, ideal. If such texts cannot maintain this level of integrity, the entire educational exercise becomes open to propaganda. Unless McGraw-Hill becomes transparent about its “independent academic review” and offers an explanation as to why it went to the extreme of destroying its inventory of Global Politics, one can only assume that the publisher has no objection to censoring its products in the face of pressure from an ideologically driven group. No doubt the motivation here is fear of controversy and subsequent market losses. In the absence of substantiating information, the whole story of an independent review and academic standards must be dismissed as a cover-up.

The sad truth is that the suborning of textbooks addressing culturally sensitive subjects has become a standard practice. Thus, the process of education is indeed threatened by incessant propaganda. This includes the culture war that swirls around American biology textbooks. It also includes the powerful Zionist drive to literally wipe the Palestinians off the map.