It is hard to think of an issue over which so much confusion and disinformation has been generated as the EU Referendum campaign. The right of the electorate to make an informed choice has been trampled on by the powers-that-be.

It is well known from the referendum on whether Scotland should become an independent country that “Project Fear” and “Project Slander” are used to lower the level of political discourse to its lowest level, and attempt to create hysteria so that a just and informed position becomes increasingly difficult to take. These attempts by the ruling elite took a very nasty course with the killing of MP Jo Cox, and the promotion of fascist-type organisations and stands. These attempts seem so desperate because the ruling elite has shown that it is incapable of sorting out any differences among its ranks within arrangements of the status quo.

Under such circumstances, it becomes even more crucial for the working class and people to take a stand of principle. The futile game of “Remain” and “Leave” campaigners damning each other for which establishment figures or rich donors support each campaign only confirms this necessity. Otherwise, passions are raised which hinder a sober assessment of what is at stake.

The unity and close co-operation of the workers’ movement in the countries of the EU does not and cannot depend on the institutions of the EU. These institutions, besides representing the interests of the monopolies, are themselves in crisis. Remaining within them further compromises the movement of the people in Britain for both democratic renewal and modern sovereign states. Withdrawing from them would facilitate the building the alternative, not only in Britain but throughout Europe.

The European Commission sees only the end of nation-building and works to impose the dictate of supra-national institutions on peoples and states within the EU. The EU is taking Europe down the road of neo-liberalism and austerity. The fight of the working class of each of these countries at the head of the people’s movement against austerity and the anti-social offensive is to settle scores with their respective ruling elites which do the bidding of the European, US or other monopolies. It is only turning around the neo-liberal economies of these countries, establishing sovereign control over the economies, that can begin to resolve the economic crises. The call that jobs, rights, working conditions, and so on, “depend on Europe” is false. Even were trade conducted on the basis of mutual benefit, a functioning national economy depends not on being competitive in the global market, but first and foremost on a planned economy under the control of public authorities accountable to the people, in which the working class and people have a decisive say on their direction.

The institutions of the EU represent the continued concentration of power and wealth in the hands of a tiny elite of owners of monopoly capital. In the main, this concentration favours German and French capital. It is put in the service of empire-building and nation-wrecking, and the use of international trade itself as a geopolitical weapon. Of course, the US empire is not reconciled to the empire-building of the European Union, but rather it is keen itself on dominating Europe and utilising 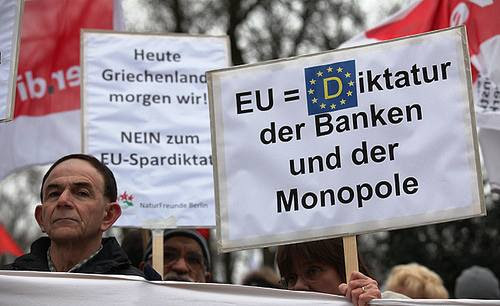 the EU to this end, pushing eastwards in collaboration with NATO to attempt to isolate and encircle Russia. It encourages the ruling elite of Britain to collude with it in this scenario. This ruling elite, however, is irreconcilably split between allying itself with US capital or with European capital. It has proved itself incapable of extricating itself from this contradiction, which continues to bedevil it and break out with even greater force. What would best serve to “make Britain great again”? Sections would even like to ally with Chinese empire-building or other sections of global capital. The working class has the opportunity to utilise these contradictions to persevere on its own independent path, and not line up behind any section of British capital which has sought to hijack and dominate the debate.

The position that the EU preserves peace in Europe is hide-bound with a perspective that wipes out the aggression and suffering that the big powers have inflicted on sovereign states, including the aggression against and dismembering of Yugoslavia. Again, the powers of “old Europe” have been pushing for the creation of a European Army under the hoax of “common defence”, an army that both colludes and contends with the aggressive NATO alliance. This push has coincided with the fostering and whitewashing of neo-Nazi organisations, particularly in the Ukraine. The “humanitarian” aspect of the EU has become thoroughly exposed through its role in creating a humanitarian crisis with refugees from Syria and Africa, and its promotion of racism against these refugees and migrants. Taken together, these facts amount to war and the preparation for war. 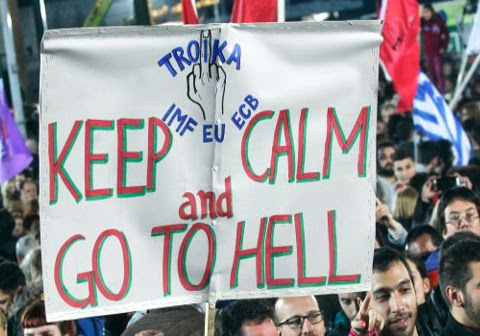 It is evident how thoroughly the ruling elite have attempted to marginalise the people in having any independent say in the referendum campaign or even in the decision to hold the referendum and what the issues and agenda are. The principle that is involved for the working class in the EU referendum is that it must have a decisive say in the direction of the economy and of society as a whole. It must defend the right to sovereignty of the nations and countries of Europe and oppose the EU as a supra-national Euro-federalist bloc imposing the neo-liberal austerity agenda throughout Europe and further endangering peace. The conceptions of a “social Europe” and a reformed EU are a mirage which diverts from the opposition to nation-wrecking and the fraudulent austerity agenda of the elites and financiers who control the EU.

In this context, it is crucial that the workers must set their own agenda and build a political movement capable of achieving it. The EU stands as a block to achieving a new society. Withdrawal from the EU has been and remains a central part of the independent programme of the working class, and opens up further opportunities for the strengthening of this programme, stepping up the challenge to the neo-liberal agenda pursued by the big powers of the EU. Withdrawal from the EU, and its eventual dismantling and the creation of an alternative, is an integral part of the struggle of the working class and people to define their own future and defend the rights of all. Ultimately, the working class must lay hold of what belongs to it, the wealth it creates. In other words, the working class and people must control the economies of Scotland, Wales and Britain as a whole.

We call on the working class and people to take a stand against the European Union of the monopolies, of austerity, of the trampling on sovereignty, and vote on June 23 for Britain to leave the EU.

Further Workers’ Weekly articles on the European Union:
No! To the EU of the Monopolies – There Is An Alternative

An EU Referendum Issue: Where Does Decision-Making Power Lie?

No to EU Austerity! Working People Themselves Must Set the Agenda

What Stand to Take on the European Union

International Trade as a Geopolitical Weapon of the EU For the website of the Campaign against Euro-federalism, see: http://www.caef.org.uk/

For information on the UK’s net contribution to the EU, see https://fullfact.org/europe/our-eu-membership-fee-55-million/

Also of interest:
A Letter From London To Our French Comrades, By John Hendy QC and Professor Keith Ewing (Institute of Employment Rights): http://www.ier.org.uk/blog/letter-london-our-french-comrades

*Workers’ Weekly is the weekly on line newspaper of the Revolutionary Communist Party of Britain (Marxist-Leninist).