The visit of U.S. President Obama to Ottawa on June 29 saw a massive police lockdown of downtown Ottawa including the prohibition of civic traffic on many roads, bridges and waterways. Public gatherings were prohibited outside of one designated location, although the geographic extent of the prohibition was not specified.

The RCMP informed, “There will be increased security measures, police presence, as well as fences and barricades in the downtown core and on Parliament Hill to ensure the safety and security of visiting dignitaries. Officers may be armed differently, there will be police dogs, different police vehicles in the area, etc.”

According to Ottawa criminal lawyer Michael Spratt via Twitter, the City of Ottawa had “set up special bail courts to deal with the expected increased arrests due to Obama visit. Police will find a way to fill them up.” 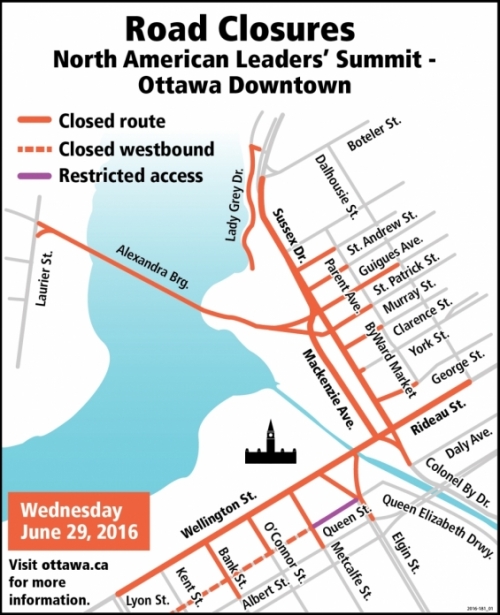 According to the RCMP, “The police remain committed to ensuring that Charter guaranteed rights and freedoms are upheld, while ensuring that police officers carry out their sworn duties. Police will assist in creating safe places for lawful advocacy, protest and dissent. Any group wishing to express their views through peaceful demonstrations are encouraged to reach out to the Ottawa Police. See the section below for more information on gathering sites.”

In that regard, the RCMP said that “The public will be allowed to gather at Major’s Hill Park. Individuals at the gathering sites should expect screening and increased police presence. These measures are in place to ensure everyone’s safety.”

Public RCMP notices did not inform the size of the area in which public gathering was prohibited, simply that it was allowed to take place at Major’s Hill Park (located directly across from the U.S. Embassy) as long as those who gathered are subject to screening of an unknown nature. 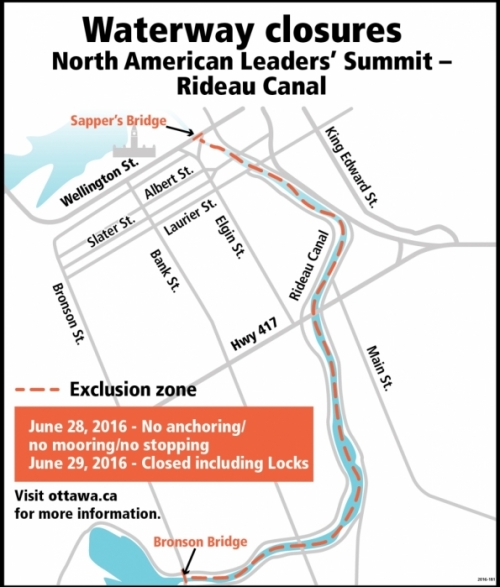 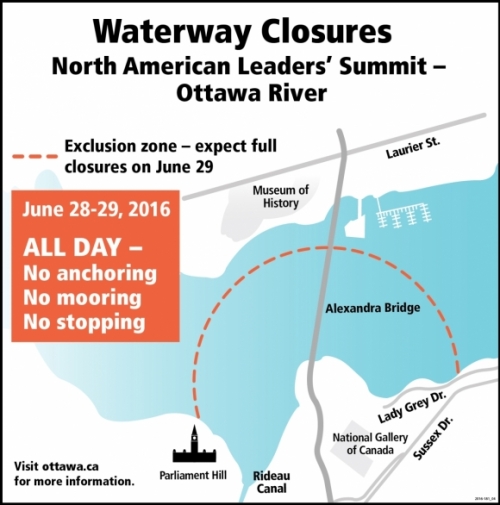 Surrounding the Parliament buildings more than a dozen streets was closed to all traffic including bicycles. Pedestrians will be given access to sidewalks of closed roads “except during a few restricted periods.” All motorists ere advised to avoid the downtown area even outside the closures.

The Alexandra Bridge to Quebec remained closed all of June 29. Access to the Rideau Canal waterways were prohibited from Dow’s Lake to the Ottawa River. Bike and jogging paths along the Ottawa river were closed.

The Ottawa River was closed to all traffic within a perimeter surrounding the Parliament, and anchoring, mooring and stopping were prohibited outside the perimeter. Several roads within and surrounding the Ottawa Airport will also be closed. The airport asks passengers to “arrive at the airport 2-3 hours prior to their flight” and notes that arriving and departing flights will also be delayed. Special airspace restrictions in Ottawa will also be in effect.

Public institutions such as the National Gallery of Canada and the Centre Block of Parliament were closed to the public and events scheduled to take place at Parliament Hill were cancelled. Media reported that “Overall, locals and tourists can expect to see heavy police presence just about everywhere downtown (at street level and above).”

Those who work within the affected area required special passes.