Haiti: The price of liberation

“Should I not let it be known to later generations that Alexander Petion is the true liberator of my country?” said Simon Bolivar, the Venezuelan leader who liberated South America from Spanish rule, to Alexandre Petion, the first president of Haiti. 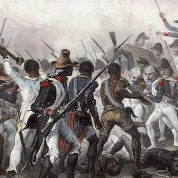 On Jan. 1, 1804, the French colony of Saint-Domingue became the Republic of Haiti, after over a decade of fighting against French enslavement and colonization. It was the most successful slave rebellion in the Americas and the only revolt of its kind that led to the creation of a state.

On Dec. 15, 1815, after his defeat in Carthagena by Spain, the revolutionary Simon Bolivar arrived in Aux Cayes, Haiti. He was seeking the aid of Alexandre Petion, one of the founding fathers of Haiti and the first president of the newly-liberated Black Republic.

Petion provided shelter and food for Bolivar and the Venezuelan families and soldiers who had traveled with him after his recent defeat by the Spanish. They recuperated and regrouped under the care of Petion.

Petion provided, among other supplies

According to records, Petion provided, among other supplies, 4,000 rifles, gunpowder, food and a printing press. He also contributed to Bolivar with Haitian military strategists and veterans from the Caribbean nation’s revolution to accompany him on his April 1816 expedition.

In exchange for all the aid that Petion provided for the Bolivarian revolutionary, he asked that the Venezuelan leader free the slaves in all the countries that were to achieve their independence from Spain.

Once again, Spain defeated Bolivar, and once again he returned to Haiti to recuperate and re-arm. This time Petion gave Bolivar shelter and aid, including a new set of ammunition. In Dec. 1816, Bolivar departed to South America to defeat Spain, and this time he succeeded.

According to “El Libertador: Writings of Simon Bolivar,” a collection of public and private letters of Bolivar, Haiti not only provided material resources but was also the model for the liberated South American nations.

Bolivar structured Bolivia’s first government from the example of Haiti and the Venezuelan constitution was based on the constitution Petion drew up for Haiti. And, of course, he declared slavery illegal in the nascent countries.

Bolivar wrote to Petition that, “In my proclamation to the inhabitants of Venezuela and in the decrees, I have to issue concerning the slaves, I do not know if I am allowed to express the feelings of my heart to your Excellency and to leave to posterity an everlasting token of your philanthropy. I do not know, I say, if I must declare that you are the author of our liberty.”

France demanded 150 million of gold francs in “reparations” from Haiti

Even though, Haiti had freed itself from French colonization and had inspired and supported the Bolivarian nations’ independence from the Spanish, in 1825, France demanded that Haiti pay 150 million of gold francs in “reparations” to former French slaveholders.

Twelve French warships with 500 cannons were stationed along the coast of Haiti, threatening to re-invade and re-enslave the Haitian state. Haiti’s hand was forced. For over a century, Haiti was required to finance the debt, through loans from one French bank, which charged Haiti incredibly high-interest rates.

French political recognition of Haiti did not cme until 1834. The brutal slavery of Haiti made France incredibly rich. The first independent Black Republic sent shock waves throughout Europe. It was a clear threat to European dominance and stood as a beacon of successful resistance against European colonization, financing the Bolivarian revolutions, and inspiring slave revolts in the United States. Haiti had to be punished. Over the years, this repayment of “independence debt” to their former slave owners, along with foreign-led coups and occupations, left the Haitian economy crippled and impoverished. As British newspaper The Guardian points out, “When the indemnity money Haiti paid France is adjusted for inflation and a minimal interest rate, its value … $40bn.”

To this day, France has refused to pay Haiti back the money it illegally demanded for over a century.

In war and peace: The Americas’ broken promises to Haiti

(September 4) – There is a seamless historical continuity between the Great Liberator Simon Bolivar’s arrival in Haiti on this date 200 years ago and the United Nation’s acknowledgment last month that its peacekeeping forces were deeply involved in a cholera outbreak that left as many as 10,000 Haitians dead.

The narrative that binds the two events together is, on its most molecular level, one of Haiti’s betrayal, both by the international community at large, and by its Latin American neighbours, in a string of broken promises that dates back 200 years to Bolivar’s arrival in Haiti.

When Bolivar arrived, as the Haitian writer Dady Chery has written, Bolivar was desperate for help to fight the Spanish, and had no other real options than the tiny, Caribbean nation that had pulled off what is – to this day – the only successful slave revolt in the Western Hemisphere. The only other Republic in the Americas at the time was the U.S. where slavery was in full flower.

With his attempts to emancipate the northern regions of South America throttled by Spain’s superior military, Bolivar had been refused help by the British in Jamaica. He turned to Haiti to seek an audience with President Alexandre Petion, who agreed to see him the following day. The two men met on January 1, 1816, and Petion interrogated the younger man, a former slave owner and notorious philanderer: “How can you found a republic where slavery exists?”

A pact was struck. Chery wrote that in exchange for Bolivar’s promise to free all slaves from liberated territories, Petion agreed to provide Bolivar and his 250 men with a small fleet, money, food, a printing press for propaganda, and weapons for 6,000 men, including 4,000 muskets and 15,000 pounds of gunpowder.

Bolivar left Haiti on March 31, 1816 with plans to take Venezuela. He failed miserably, returning to Jacmel on September 4, 1816, to regroup. Petion redoubled his efforts, supplying Bolivar not only with materials but also with Haitian soldiers, of whom Bolivar later wrote: “This group of Haitians that faced down 10,000 European tyrants numbered 300 men.”

Chery writes that Bolivar did indeed abolish slavery in his territories, but “this is where the narrative about Petion and Bolivar usually ends, and it is a great story if one believes in fairy tales. Latin America does not like to be reminded that its great liberator, Simon Bolivar, never formally recognized the Republic of Haiti and never sent any diplomatic representative of his new government to our island republic. In 1826, for the first meeting of the independent states of the Americas, i.e. the Congress of the American States in Panama, Bolivar invited United States President John Quincy Adams, a proponent of the Monroe Doctrine and supporter of the slave trade, but he excluded Haiti.

Which brings us to the U.N. peacekeeping troops, known by the acronym MINUSTAH. Several South American countries supply the peacekeeping force with troops for what is widely seen as an occupation. In 2011, five Uruguayan peacekeepers raped a Haitian boy, and despite videotaped evidence of the crime, were never charged with the crime.

And Brazil, Chery notes, has used its peacekeeping contingent in Haiti to test new military hardware and secure construction contracts for domestic industries and even arranged for Haitians to work for some of Brazil’s most exploitive employers.

You can, Chery argues, draw a straight line from Bolivar’s betrayal, to South America’s participation in the United Nation’s occupation.“By denying Haiti, pretending that Haitian independence never happened and trying to destroy Haiti’s slave revolution, Latin America cannot become more powerful on the world scene, it can only lose its way and Haiti’s great gift of independence.”