Photo Review: Achievements of workers’ movement over the past year

TML Weekly is publishing on the occasion of May Day 2017 a photo review highlighting the struggles of the working people of Canada and Quebec since May Day 2016. May Day is a time to carry out summation of the achievements of the workers’ movement in the past year and set goals for what it seeks to achieve in the coming year.

May Day Salute to the Workers of All Lands!

END_OF_DOCUMENT_TOKEN_TO_BE_REPLACED

The US military moves deeper into Africa 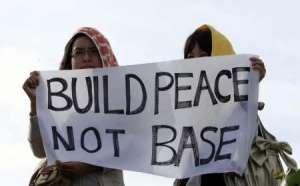 General Thomas Waldhauser sounded a little uneasy.  “I would just say, they are on the ground.  They are trying to influence the action,” commented the chief of U.S. Africa Command (AFRICOM) at a Pentagon press briefing in March, when asked about Russian military personnel operating in North Africa.  “We watch what they do with great concern.”  END_OF_DOCUMENT_TOKEN_TO_BE_REPLACED

When tourists visit sub-Saharan Africa, they often wonder “Why are there no historical buildings or monuments?”

The reason is simple. Europeans destroyed most of them. We only have a few drawings and descriptions by travellers who visited the places before their destruction. In some places, ruins are still visible. Many cities were abandoned when Europeans brought exotic diseases (smallpox and influenza) which started spreading and killing people. Most of those cities lie hidden. In fact the biggest part of Africa history is still under the ground. END_OF_DOCUMENT_TOKEN_TO_BE_REPLACED

Africa ‘threatens the future of the planet’

I picked up the Globe and Mail to read that Africa “threatens the future of the planet.” Under the guise of advancing the rights of African women, correspondent Geoffrey York (in his front-page article “U.S. cutbacks undermine efforts to keep Africa’s population in check”, Globe and Mail, April 17, 2017) openly advocates the long discredited neo-malthusian imposture.

Moreover, this utterly anti-black racist tract is embedded in the open white supremacist view that there are too many Africans. York actually states “humanity is increasingly becoming African…The result could be an escalating crisis in hunger, over crowding, ecological damage and rising immigration pressures in Europe and North America and within Africa itself.”

Thus, all the problems of Africa are attributed to the existence of excess Africans NOT to the global imperial system that has been built on the dehumanization, brutalization, plunder and exploitation of Africans and the African continent. END_OF_DOCUMENT_TOKEN_TO_BE_REPLACED

All Out to Defend and Humanize the Natural and Social Environment

The second People’s Climate March is taking place in Washington, DC on Saturday, April 29 at the National Mall, blocks from the White House. Tens of thousands are expected to attend, highlighting the deep concern of the people over climate change and their demand for deep-going transformations to avert the dangers it poses and defend the natural environment. END_OF_DOCUMENT_TOKEN_TO_BE_REPLACED

The CIA paid a major Chilean newspaper to discredit President Allende and support the Pinochet dictatorship.

Agustin Edwards Eastman, the owner of the largest media conglomerate in Chile who died Monday, and his conservative media establishment were crucial to the CIA-backed operation to oust socialist President Salvador Allende in a coup in 1973 and install a military dictatorship, declassified documents have revealed.  END_OF_DOCUMENT_TOKEN_TO_BE_REPLACED

Tagged as Chile, CIA and the Media, Disinformation, Human Rights, Media as a Force Multiplier, Torture

Actions across Canada against US attacks on Syria 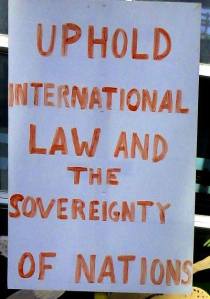 On April 6th, the 100th anniversary of the American entry into World War One, the US launched missile strikes against Syria.

About 60 tomahawk cruise missiles were launched by the USS Porter and the USS Ross against the Ash Sha’irat airbase near Homs in Syria. The Arleigh Burke-class guided missile destroyers, forward based at Naval Station Rota, Spain, are part of the US Navy’s 6th fleet. END_OF_DOCUMENT_TOKEN_TO_BE_REPLACED

Oppose US air strikes against Syria! No to escalating the military conflict in Syria! Hands Off Syria!

The U.S. has engaged in criminal activity by launching tomahawk missiles against Syrian military targets on the night of April 6. News agencies report that 50 to 60 tomahawk missiles were launched from two U.S. warships in the eastern Mediterranean between 8 and 9 pm against the Shayrat airbase in Syria, allegedly hitting runways, aircraft and fuel stores. According to some reports, the targeted airbase played a significant role in the Syrian army’s efforts to liberate cities in central, northern and eastern Syria from ISIL, including the battles for Palmyra, Raqqa and Deir Ezzor.

U.S. imperialist president Donald Trump used the pretext of a chemical weapons attack that is widely suspected to have been a provocation by forces in the pay of the Anglo-American imperialists to blame Syrian president Bashar Al-Assad and justify launching the strikes. The aim is to ensure that there is no peaceful, political resolution of the conflict in Syria under the auspices of the Syrians themselves along with those countries they have sought assistance from including Russia.

Trump said the tomahawk missile attack was to defend the “vital national security interest to prevent and deter the spread and use of deadly chemical weapons.” To cover up the barbaric nature of this attack, Trump called on “civilized nations” to “join us in seeking to end the slaughter and bloodshed in Syria.” He said “years of attempts at changing Assad’s behaviour have failed.”

News agencies report that there will be no further strikes until “another decision is made.” Trump is alleged to have informed various countries before the attack, including Russia through military channels, and the U.S. said it received support from “a broad list of nations.”

The cruise missile attack comes after 1,000 U.S. ground troops invaded the country in the past weeks with another 1,500 expected to enter soon after.

From the website of the Communist Party of Canada (Marxist-Leninist)