On November 21, 2009 some 200 people gathered in a rally in Cornwallis Park to oppose the inaugural Halifax International Security Forum (HISF), a warmongering agency based in Washington, DC and funded by the Department of National Defence and Atlantic Canada Opportunities Agency. They took the collective decision to rename it Peace and Freedom Park as their very first act, an act carried out in consultation with Mi’kmaq elders such as acclaimed historian Dan Paul.

They covered the statue of Edward Cornwallis with a white sheet. The anti-war rally was organized by an ad hoc committee consisting of activists from different affiliations and background, which became No Harbour for War.

On behalf of all those present in 2009 and in the ensuing annual rallies against the HISF, I call on everyone to join in the “Removing Cornwallis” activities of July 15, 2017 from 12:00 to 15:00 hours to reaffirm this principled and popular demand.

Though I am unable to attend I will be with you in spirit.

I am reproducing the statement of the ad hoc committee poignantly delivered by Betty Peterson in 2010:

MC: We are very pleased and would like to thank Betty Peterson for coming today. Let’s have a round of applause. [Cheers] Betty has dedicated her entire life to ending colonial injustice and making Canada a zone for peace. Betty is here to rededicate what is formerly known as the so-called “Cornwallis Park.” Unfortunately Dan Paul, the co-author of the (deCornwallis) petition and author of We Were Not The Savages (Fernwood), could not be here. However, on behalf of the Mi’kmaq nation he sent his ardent support for the renaming of Cornwallis Genocide Park to the Halifax Peace and Freedom Park! Betty is also going to ask for a moment of silence at the end. Everyone lend an ear for Betty Peterson.

Today I have been asked to address you. I feel very privileged to do so. 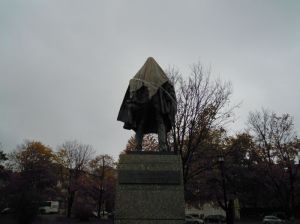 Today we are gathered together in this anti-war rally 261 years after the scalping proclamation issued by Edward Cornwallis, the so-called “founder” of Halifax and governor of Nova Scotia. In 1749, Cornwallis put a bounty on the scalp of every Mi’kmaq man, woman and child in the province – a move tantamount to genocide. That Acadians too were scalped is a matter of historical fact. It is vital that we condemn all crimes of genocide and crimes against humanity and that we learn the lessons of history in order that we can prevent similar crimes in the future.

This barbaric proclamation, an instrument of British colonial white supremacy and injustice, has never been formally withdrawn nor apologized for. This barbaric proclamation was one of the instruments for the dispossession and extermination of the Indigenous and peace-loving Mi’kmaq Nation – and the war of terror against and forcible deportation of the peace-loving Acadian people – a war of conquest of Nova Scotia and the Canadian colonies, and the establishment of Halifax as a harbour for war — No Harbour For War! . . . and a base for aggression in the Americas.

In 1933 the city fathers commissioned a statue of Cornwallis and named this park to honour this war criminal. The Westin Hotel across the street, host of the Halifax War Conference (Halifax International Security Forum), also boasts a Cornwallis Room. [Shame!]

We call on everyone to endorse the mass petition initiated by the Mi’kmaq and their allies to deCornwallize (decolonize) Nova Scotia [Cheers], to remove the name of this genocidal officer from the names of all public buildings, sites and towns in Nova Scotia. [Cheers] Denounce the stubborn, unjustifiable resistance of the governments to this just and principled demand! This petition may be found on the Internet in the English, French and Mi’kmaq languages.

We reaffirm the collective decision of last year’s anti-war rally to rename this park the Halifax Peace and Freedom Park! [Cheers]

The Indigenous nations of Canada have been second to none in the opposition of the Canadian people to the US-led NATO bloc and their war preparations. 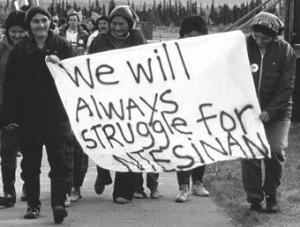 Innu women demonstrate in the mid-1980s against NATO overflights and for self-determination for their homeland which they call Nitassinan.

Let us salute the heroic resistance of the Innu people of Nitassinan against the US and NATO, which turned Labrador into its private flight training centre.

How many remember the Innu of Labrador? How many? Not many. Well I’m telling you something about them. In 1949 Canada was the first country to ratify the North Atlantic Treaty. Lester B. Pearson said that NATO was the ideal pretext to justify the establishment of US military bases in Canada, 23 of which had already been built in Newfoundland and Labrador during World War II.

The struggle against NATO was waged right here. The Innu nation fought every inch of the way against the appropriation of their traditional lands for US and NATO bases and the damage to their way of life by the low level training flights of US, British and German Luftwaffe jet fighters. Instead of defending their rights, the Government of Canada forcibly relocated, then arrested and criminalized hundreds of Innu [Shame!], who staged massive sit-ins at the military bases. Today Canada is feverishly participating in the militarization of the Arctic.

And I was there standing with them.

And how about the Lubicon in Alberta? I was there as well and was arrested with others and put in jail. And now the Alberta government has given permission for the tar sands in Alberta to take over Lubicon land. They are calling this Tar Sands Number 2.

This anti-war rally of the people of our city defends the rights of all peoples to self-determination. The rights we demand for the people of Afghanistan must be accorded the Indigenous peoples of Canada!

We ask everyone for a minute’s silence to remember the millions who have died as a result of genocide and crimes against humanity.

MC: Betty Peterson is 93 years and it is really brave and wonderful of her to come out. Thank you Betty. [Cheers – “Thank you Betty!” “93 years young!” “See you next year Betty!”]

BETTY PETERSON was born in the United States in 1917. As social activists, pacifists and Quakers, she and her late husband, Gunnar Peterson, were conscientious objectors during World War II. They also participated in the civil rights movement in Chicago for 23 years and in Vietnam War protests before leaving the United States to settle in Halifax in 1975.

In Nova Scotia Betty continued her advocacy for the peace movement, especially with the Voice of Women for Peace and Halifax Society of Friends (Quakers). She took this up with a passion. She supported causes concerning the humanizing of the natural and social environment; women’s rights; education; nuclear disarmament; solidarity with Cuba, Nicaragua and Palestine; and the rights of the Indigenous peoples.

She participated in several out-of-province crusades, which were supported in part by Canadian Society of Friends and chronicled in national media reports, including a 1988 trek to Little Buffalo, Alberta, to support the Lubicon Cree Nation’s land-claim fight and a 1987 trip to Goose Bay, Labrador to stand with the Innu protesting NATO low flying military planes at the Canadian Forces Base.

Among her many activities in Halifax were participating in ecumenical movements for social justice (with Kairos), protesting the 1991 Gulf War, promoting an alternative People’s Summit (P7) during the 1995 G-7 meeting held in Halifax, NS, and joining a 1996 sit-in at a Gottingen Street Canada Employment Centre being closed. In the early 2000s she participated in public vigils protesting the wars in Iraq and Afghanistan and has been a member of the Raging Grannies, a greying band of activists who use street theatre to promote peace and women’s rights. In most of these organizations Betty Peterson had a major role such as organizing, planning, and keeping detailed records of activities, names, strategies and results.

From the first time I met Betty in the 1980s I was struck by the fact that her political stands were characterized by opposition to US imperialism as the main source of war and main threat to peace in the world and her warm support for national liberation struggles. This was in stark contrast to the state-promoted line that blames the people for “violence” and racism or attributes the struggle against occupation as “a cycle of violence” in which the victimizer and the victim are placed on the same plane. We sincerely appreciated her opposition to and disgust with sectarianism and the factional spirit which is used to split and divide the polity on the basis of ideology, and the use of NGOs by the Department of National Defence as gatekeepers to infiltrate the anti-war movement.

In the fall of 1997 over 200 of her friends gathered at the North Church to celebrate her 90th birthday and pay tribute to her lifelong and tireless work. The festive function was a living refutation of the line that the anti-war activist is so-called “isolated” in Halifax and reflected how many lives she had touched. As feisty as ever, she applauded the work of all those participating in the struggles to defend the rights of all and in particular hailed the clarion call of “No Harbour for War!” She had called me earlier to bring all our banners, which she wished to hoist proudly on the walls of the hall as her own.

Betty was a longtime reader and active supporter of Shunpiking Magazine and its 13 years work to develop independent and progressive media that puts the concerns, life, culture and history of the people at the centre of its canvas. She would oft-times drop in to our office at 6211 North Street to discuss the latest issues and applaud all those involved in voluntarily distributing the magazine into the small towns and villages of the Canso Straits area where she maintained a small summer cottage to rest.

She personally endorsed my own candidacy for the Marxist-Leninist Party of Canada party in several elections and our stand for an anti-war MP for Halifax and an anti-war government for Canada which defends the rights of all as the pro-war stand of the major political parties had became more and more evident.

Her friend Carolyn van Gurp notes on Facebook that “Betty, soon to turn 100 years old, had wanted to be at the July 1 Oppose 150 early morning event near the bridge. Though physically she would not have had the strength.” – Tony Seed, with a file from the Nova Scotia Archives

This article has also been reproduced by TML Weekly, the in-depth and informative online newspaper of the Communist Party of Canada (Marxist-Leninist), as well as by the The Nova Scotia Advocate, an online publication which covers issues such as poverty, racism, exclusion, workers’ rights and the environment in Nova Scotia. Robert DeVet, formerly with the Halifax Media Co-op, is the editor. Check it out. My thanks to both publications.

History of Halifax, a Mi’kmaw perspective

2 responses to “‘Removing Cornwallis,’ it’s been a long time coming”