Long live the just cause of the Venezuelan people to uphold the Bolivarian Revolution!

Demonstration in support of the of the Venezuelan people and their defence of the Bolivarian Republic, Ottawa, July 29, 2017, one of several in Canadian cities.

(August 2, 2017) – The Communist Party of Canada (Marxist-Leninist) expresses its whole-hearted support for the Venezuelan people in their struggle to defend the Bolivarian Revolution and the sovereignty of the Bolivarian Republic against foreign-inspired violent opposition forces.

We wish them the greatest of success with their completely legitimate process to create a new constitution that will express the true aspirations of the people today and allow them to create a society that will continue to make advances in improving the lives of the people.

We condemn the criminal anti-democratic role played by the Canadian government through its Minister of Foreign Affairs Chrystia Freeland in supporting the campaign led by the U.S. to stop the constitutional process, overthrow the government of President Nicolás Maduro and return Venezuelans to a life of mass poverty and repression. 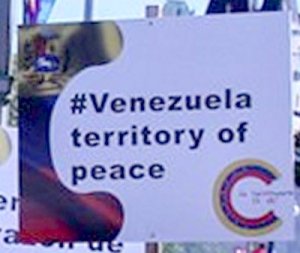 Freeland has no legal or moral basis, and no mandate from Canadians, for joining in the threats to Venezuelans that they should stop the constitutional process. Only the Venezuelan people have the sovereign right to decide the direction of their society and how they will choose their form of government. Freeland’s demands, from a script written in Washington, are an unacceptable interference in the affairs of a sovereign country. They are part of an attempt to stage a constitutional coup d’état in Venezuela of the type already engineered in Honduras in 2009 and in Brazil last year – all in the name of upholding democratic processes and principles. It is a fraud.

Toronto, July 29, 2017. The signs read,
“Our revenge will be the deepening of
the Bolivarian Revolution!” and
“The Constituent Assembly is coming!”

So too the representatives of the Conservative and New Democratic Parties are taking a similar position. Their warnings against following the legal constitutional process in Venezuela are especially hypocritical at this time when the Government of Canada is celebrating 150 years of a constitution imposed by Royal Prerogative by a foreign imperial parliament. Lest Freeland forget, her government even ignored its own bogus consultation process and promises on changes to Canada’s electoral law.

Freeland’s demand that Venezuela “return” to democracy and “follow international law” is not only hypocritical but also absurd given Canada’s support for neo-Nazis and former Nazi collaborators in Ukraine and its support for U.S. wars of aggression, occupation and regime change in various parts of the world. It is the Government of Canada which is violating international law by interfering in the internal affairs of independent countries, all in the name of high ideals.

Freeland and these political parties with seats in the Parliament do not speak for Canadians when they repeat U.S. threats against Venezuela. Canadians want Canada to uphold the principle of respect for the sovereignty of all nations. CPC(M-L) wishes Venezuelans the same bright future of democracy and independence that we want for ourselves. We support the aim of the Constituent Assembly to consolidate the project for Venezuelans to build a better life for themselves in peace.

President Maduro at the headquarters of the CNE in Caracas, July 31, 2017, receives the first copy of the Electoral Bulletin from CNE President Tibisay Lucena, saying “I accept the heroic will of the people of Venezuela: we have the National Constituent Assembly.”

The Venezuelan National Electoral Council (CNE) announced around midnight on Sunday that 8,089,320 Venezuelans, representing 41.53 per cent of the country’s registered voters, had participated in Sunday’s National Constituent Assembly (ANC) election.

CNE President Tibisay Lucena reported that 537 of the Constituent Assembly’s 545 members were elected on Sunday and that on Tuesday, August 1, Venezuela’s Indigenous communities will choose the eight remaining representatives following their own traditional processes.

Upon receiving the first Electoral Bulletin containing the preliminary results, President of the Bolivarian Republic of Venezuela Nicolás Maduro congratulated the CNE for its work. He said its ability to guarantee, in the middle of a war, that the people were able to exercise their will and to go out and vote, in his opinion demonstrated the strength of the country’s democratic institutions.

A group of 43 people made up of “political experts, parliamentarians, Indigenous people, peasants, workers and representatives of missions and electoral bodies” from Europe and South, Central and North America who were invited by the National Electoral Council to witness the election issued their own communiqué. Among them were members of the Council of Latin American Electoral Experts (CEELA) who had been engaged to observe and make recommendations for different aspects of running the election starting July 17 through to the day of the vote. CEELA has issued a more detailed technical report of its findings that is consistent with what was expressed in the communiqué. It can be seen here.

The international group said they deemed the election to have been called in a legal and legitimate manner based on Article 348 of the country’s Constitution and in accordance with the Charter of the United Nations. They further pointed out that the people’s ability to exercise their right to vote was guaranteed through the provision of voting centers throughout the Venezuelan territory and their right to a secret ballot was guaranteed by the CNE’s voting system, fully auditable at all stages and whose reliability for data processing and transmission has been verified in 20 national elections.

The international witnesses said Venezuelans had participated in a peaceful and civic manner in exercising their constitutional right to vote in free, universal and direct elections by means of a secret ballot. They commended the people for “speaking out for peace through their participation in voting despite the threats and interventionist actions of both the Government of the United States of America and its partners and allies.”

They condemned the “violent and terrorist acts unleashed by anti-democratic sectors” before and even during the electoral process, calling them an attempt to intimidate and terrorize the population and sabotage the electoral process. They also condemned what they described as a massive international media campaign against Venezuela’s democracy aimed at creating the conditions to trigger a foreign intervention.

The group expressed their belief that the National Constituent Assembly would be a space to promote the coming together of all Venezuelans regardless of political affiliation in an inclusive dialogue to set Venezuela on a course towards collective well-being in an atmosphere of peace and the full exercise of the peoples’ right to self-determination.

The communiqué concluded with a call to the peoples and governments of the world to respect the results of the National Constituent Assembly election as a manifestation of the self-determination of the Venezuelan people.

Glory to the Brave People of Venezuela

The 30th of July 2017 the people of Venezuela showed the world that they are not afraid nor are they going to pay attention to those who with arrogance and violence want Venezuela to return to being a colony of the North American empire, to be once again a society divided between the have and the have nots, to return to living with children begging in the streets, who are looked upon with disdain, to return to having people living in huts made from garbage and with no drinkable water, to return to having wonderful exclusive hospitals for the rich and to return to life with a minority who decides everything and a majority with no voice.

Last Sunday men and women from all corners of the homeland did not bow down their heads before the threats and violence, and said yes to peace, yes to uniting all Venezuelans to respectfully resolve the problems of the country amongst themselves. With their vote in hand, they said to the world that Venezuelans do know how to meet as brothers and sisters to face any challenge. The vote of the valiant and pacific people of Venezuela is already written in the books of history and neither the threats of the North American empire nor the negative chorus of its servants in their government palaces and their media spokesmen can change that.