Photography and text documenting the reality of Palestine and Palestinian life, politics and culture during a month of the year

Four of the Palestinians killed in February were slain during search and arrest operations. Ahmad Samir Mahmoud Abu Ubeid, 18, was shot in the head while confronting soldiers during a raid in pursuit of Ahmad Nasser Jarrar in the northern West Bank village of Burqin on 3 February. Jarrar, who Israel suspected of involvement in the shooting death of a settler in January, managed to evade occupation forces for nearly a month before he was killed in what may amount to an extrajudicial execution in Yamoun village in the northern West Bank on 6 February. A third Palestinian was previously killed by Israeli forces during their pursuit of Jarrar in January and the military waged a weeks-long campaign of collective punishment in the northern West Bank following the shooting death of the settler. 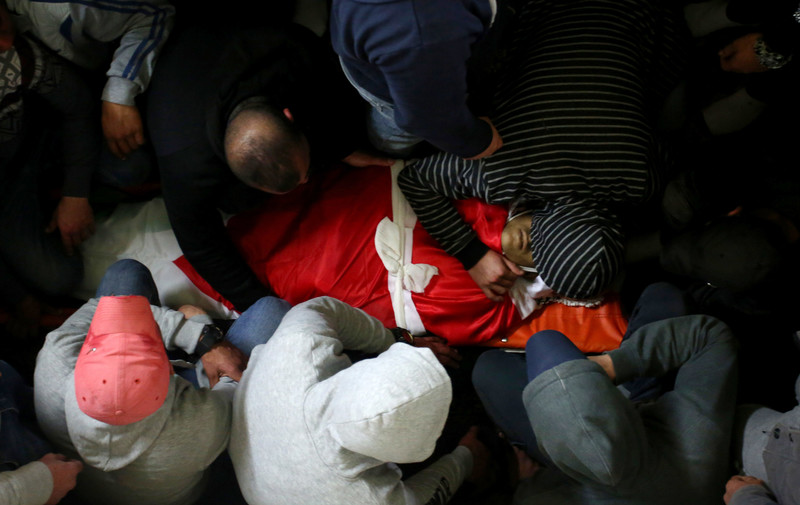 Also on 6 February, Israeli forces shot Khalid Walid al-Tayeh in the chest, killing him, during confrontations that erupted when soldiers raided the West Bank city of Nablus to surround a house belonging to the father of a Palestinian suspected by Israel of fatally stabbing a settler a day earlier.

Yasin Omar al-Saradih, 35, was shot in the stomach by Israeli forces during an arrest raid in the West Bank city of Jericho on 22 February. Soldiers were seen on video beating al-Saradih after he was shot and leaving him to lie on the ground for at least 10 minutes without providing him with first aid. The Palestinian rights group Al-Haq stated that the slaying may amount to a war crime, “giving rise to individual criminal responsibility at the International Criminal Court.”

A sixth Palestinian in the West Bank was killed during February. Hamzeh Youssif Zamaareh, 19, was shot and killed by a security guard after allegedly stabbing another guard at the Karmei Tzur settlement on 7 February.

Three Palestinians, two of them children, were killed in the Gaza Strip during February. Ahmad Muhammad Abd Rabbo Abu Hilu, 18, died on 21 February after being shot in the head during a protest on the Gaza-Israel boundary on 16 February. Salem Muhammad Sabbah, 16, and Abdallah Ayman Armelat, 14, were killed by Israeli shelling in Rafah on 17 February. Two other teenage boys were injured during the incident.

One of the surviving children told Defense for Children International Palestine that the group were attempting to cross into Israel in search of work when they came under fire. Israeli forces didn’t permit medical teams to access the slain boys’ bodies until the next day, according to the rights group Al Mezan. The boys were killed as occupation forces hit several sites allegedly used by Palestinian armed groups in Gaza after four soldiers were wounded by an explosive device Israel says was planted along the Gaza-Israel boundary. Armed groups in Gaza responded by firing rockets towards Israel, causing no injuries.

Ismail Abu Riyala, 18, was shot in the head by Israeli naval forces while fishing off of Gaza’s coast on 25 February. Two other fishers were injured during the attack. One of the surviving fishers denied Israel’s claim that the group had strayed from the permitted fishing area, adding that naval forces continued to fire on the fishers even after they had jumped in the water. Israel continues to detain Abu Riyala’s body. Israel has shot at Gaza fishers at least 68 times so far this year, resulting in one fatality and 11 injuries, according to OCHA. In addition, one Gaza fisher was killed by the Egyptian navy in January.

Hospitals shut down in Gaza as the decade-long siege on the territory was tightened and at least 19 health facilities ran out of emergency fuel for generators. Power outages in Gaza continued for up to 20 hours a day after “a complete halt in electricity supply from Egypt, reportedly due to technical malfunctioning of the three feeder lines,” OCHA stated.

Rafah crossing, the sole point of exit and entry for the vast majority of Gaza’s two million residents, was open for travel in both directions for five days during the month, and an additional day for travel in only one direction.The exceptional opening by Egypt allowed 2,200 Palestinians to exit Gaza and nearly 1,400 to enter the territory. More than 23,000 Palestinians in Gaza are registered and waiting to cross Rafah.

Approximately 850 Palestinians, including some 200 children, were injured by Israeli forces during protests and confrontations during the month. Most of the injuries occurred during weekly protests against the occupation in the West Bank and during demonstrations against the US recognition of Jerusalem as Israel’s capital.

Israeli forces demolished or seized some 45 Palestinian-owned structures in the West Bank during the month on the pretext that they were built without a permit, causing the displacement around 50 Palestinians, half of them children.

Settler attacks on the rise

A 91-year-old man was among the more than a dozen Palestinians injured by Israeli settlers during the month. Settlers also killed 17 sheep and stole another 37. “Settler violence has been on the rise since the beginning of 2018, with a weekly average of six attacks, compared to an average of three in 2017 and two in 2016,” according to OCHA.

Twenty-one Palestinians were recorded to have died in February as a result of the ongoing war in Syria, the Action Group for Palestinians of Syria reported. Three of those killed were executed by Islamic State fighters in Yarmouk camp on charges of providing information to rival groups. A two-month old baby in Yarmouk died as a result of the ongoing siege on the camp. Two boys from Yarmouk camp, Qusay Haitham Hamadi Muhammad, 14, and Baha al-Deen Muhannad Hamadi Muhammad, 15, were killed by shelling from rebel forces while walking home from an United Nations-administered school in Jaramana camp. Most of the other Palestinians killed during the month were fighters who were slain during battle. 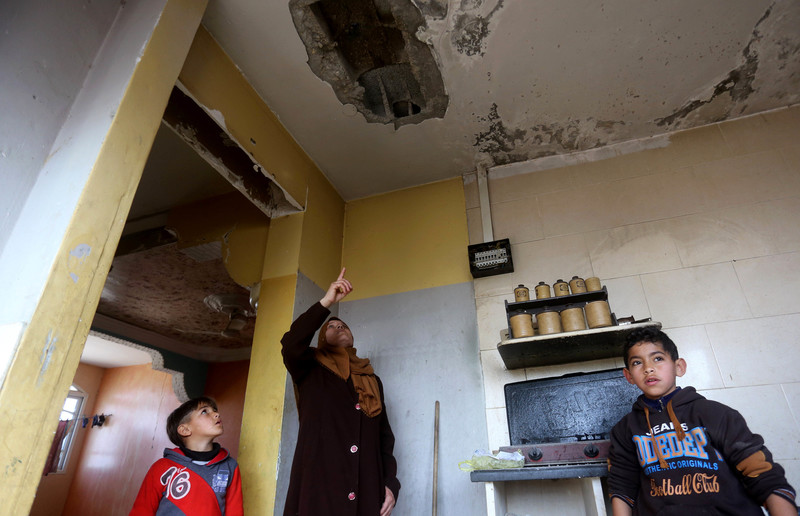 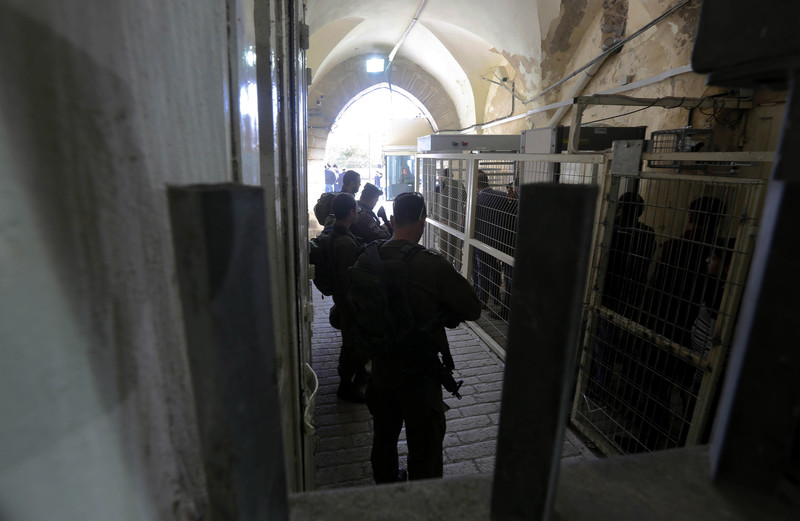 Israeli Border Police combatants stand guard as Palestinians pass through a checkpoint at the entrance to the Ibrahimi mosque in the West Bank city of Hebron, 2 February. February marked the 24th anniversary of the Ibrahimi mosque massacre, when a US-born settler opened fire at the holy site, killing 29 Palestinian worshippers | Wisam Hashlamoun APA images 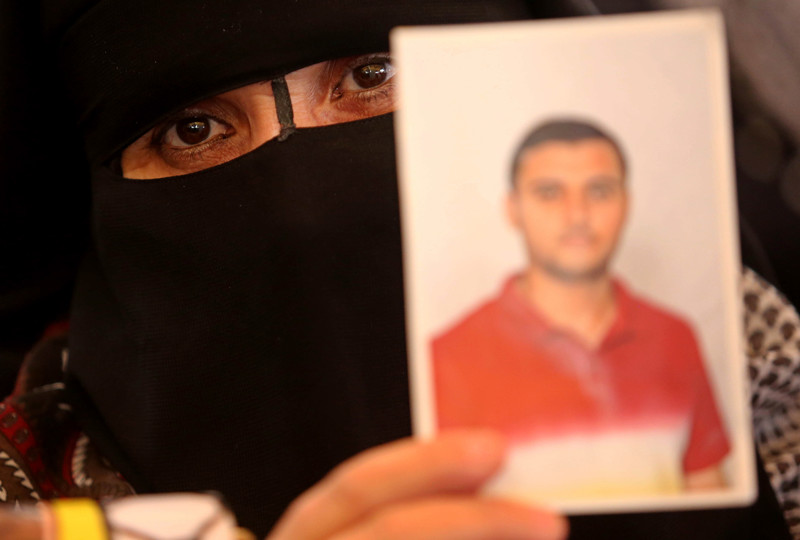 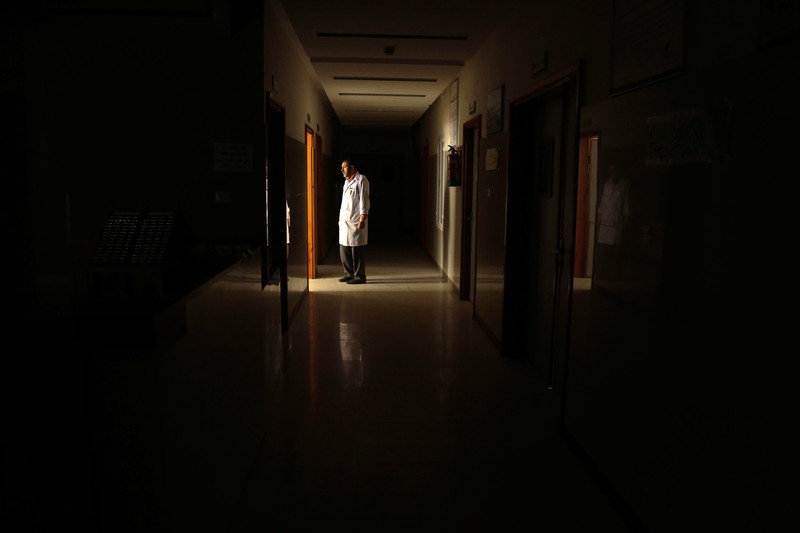 A health ministry employee walks through the corridor of al-Dura hospital in Gaza City after the pediatric hospital stopped services on 7 February. Several medical centers in Gaza have halted services after running out of fuel to power generators. The Gaza health ministry stated that the healthcare infrastructure in Gaza had reached an “unprecedented stage” due to the chronic electricity crisis | Dawoud Abo Alkas APA images 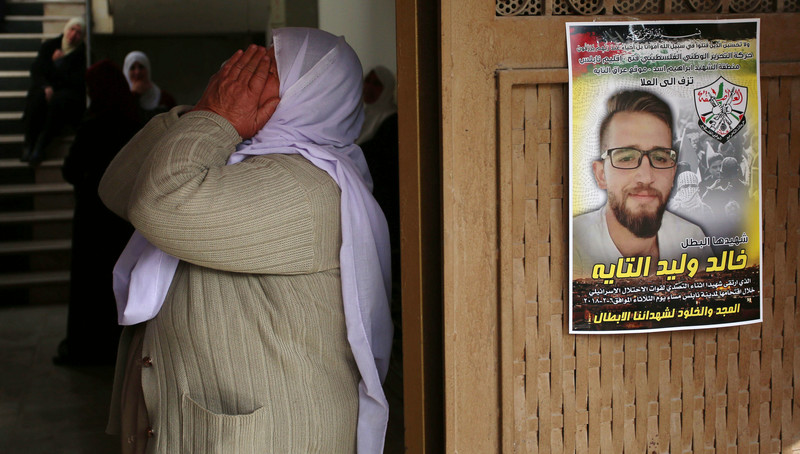 A relative mourns during the funeral of Khalid al-Tayeh, shot dead during an Israeli raid that led to confrontations with residents in the West Bank city of Nablus, 7 February | Shadi Jarar’ah APA images 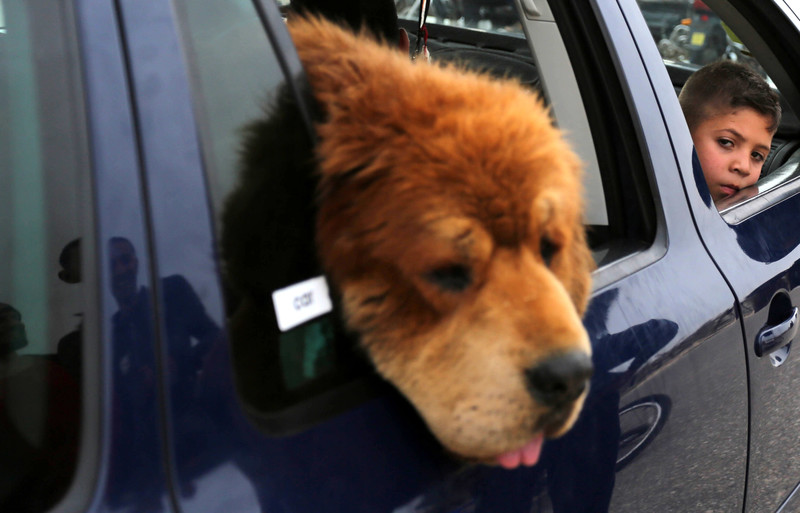 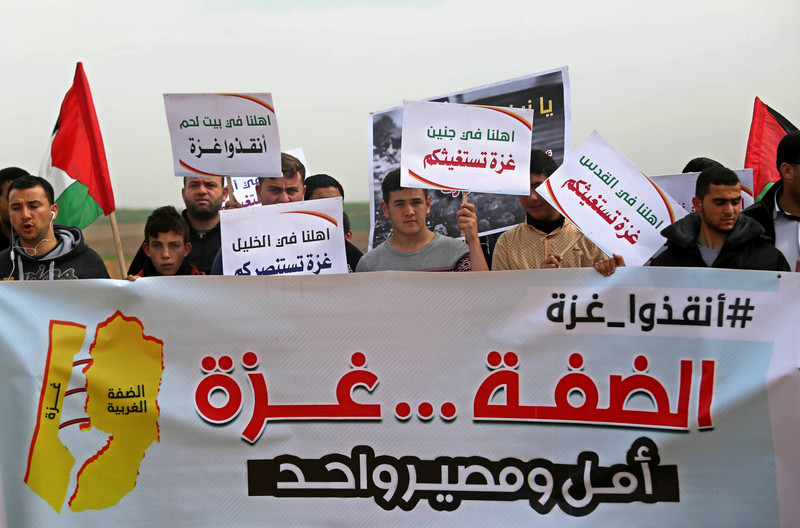 Palestinians in northern Gaza demonstrate under the banner of “Message from Gaza to the West Bank,” calling for action from West Bank Palestinians in support of their compatriots in Gaza, 10 February | Ashraf Amra APA images 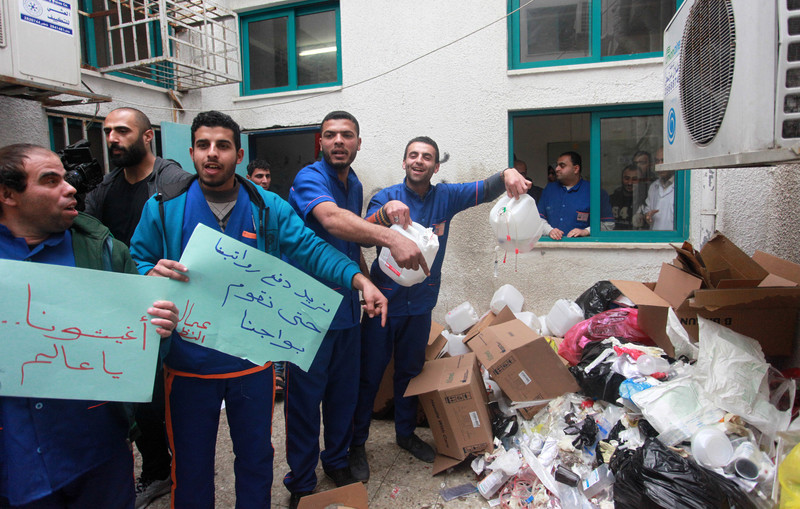 Palestinian cleaners protest to demand payment of their salaries at al-Shifa hospital in Gaza City, 12 February. Cleaners at Gaza’s largest hospital had not been paid in five months | Mahmoud Ajour APA images 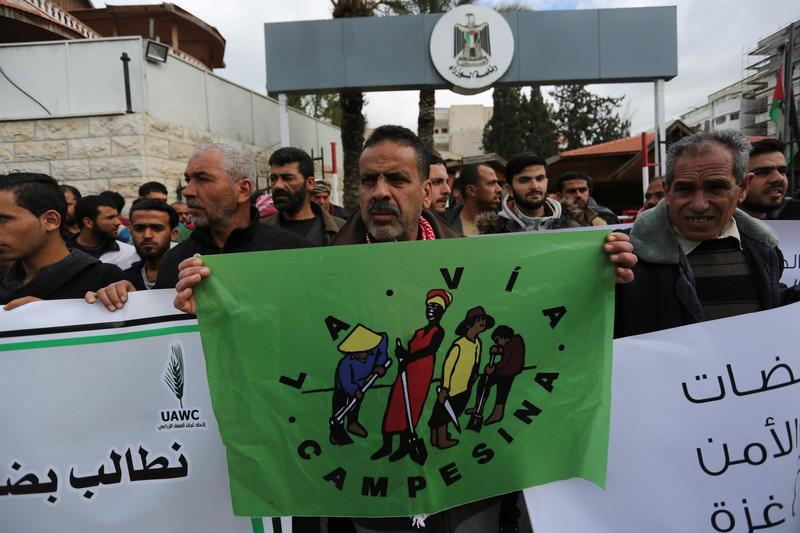 Palestinians hold banners during a demonstration of solidarity with farmers affected by natural disasters in front of the headquarters of the Council of Ministers in Gaza City, 13 February | Ashraf Amra APA images 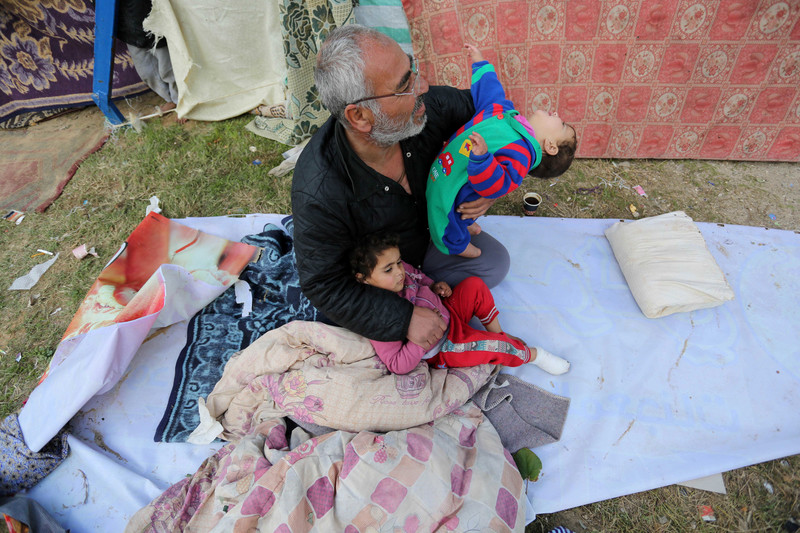 Fadel al-Deree with two of his eight children outside his family’s tent in the middle of Gaza City, 13 February. Al-Deree and his wife and children left their apartment, where they lived for 12 years, after the father lost his job and was unable to pay the rent | Ashraf Amra APA images 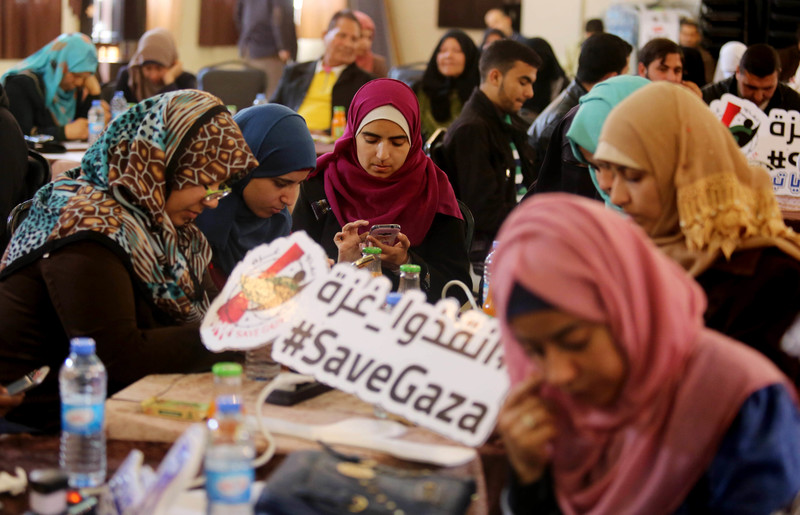 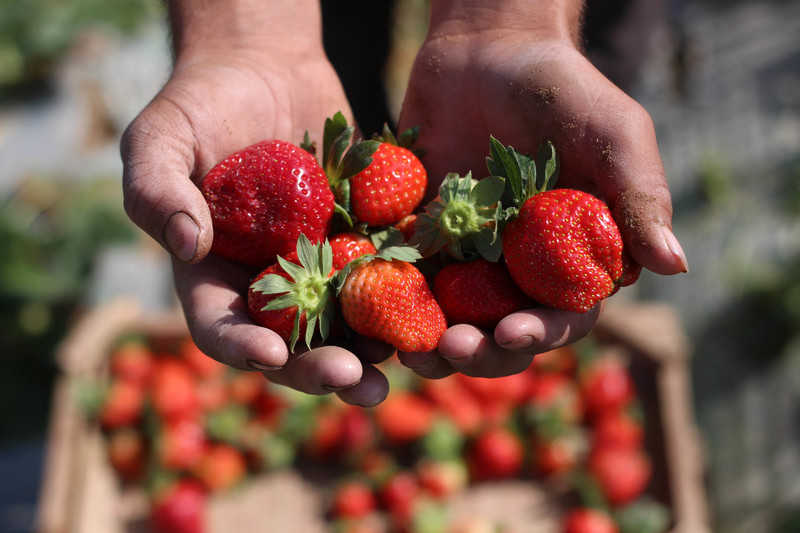 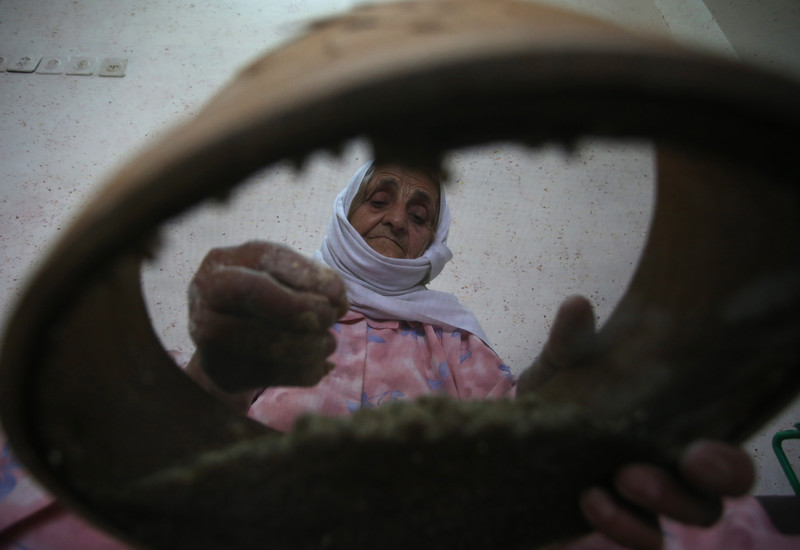 A Palestinian woman prepares fresh couscous in the West Bank city of Nablus on 15 February 2018. British airline Virgin Atlantic removed the word “Palestinian” from the name of a dish on its in-flight menu following complaints from pro-Israel customers, The Electronic Intifada reported during the month | Ayman Ameen APA images 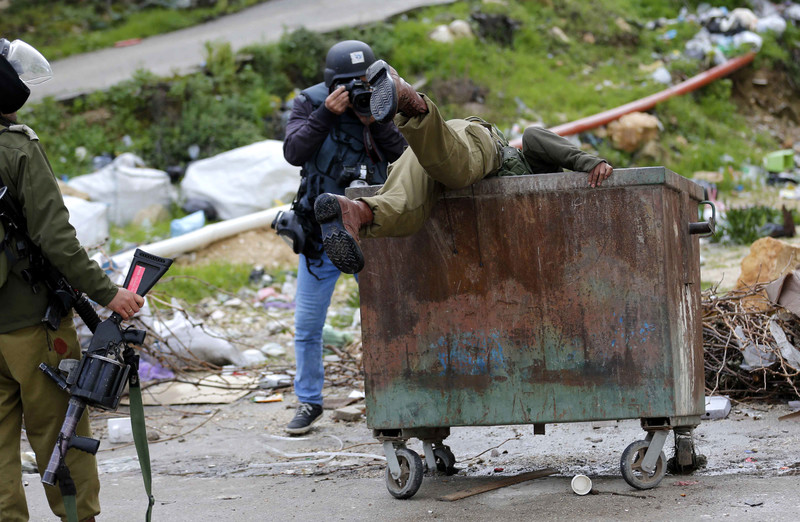 An Israeli soldier jumps into a dumpster to retrieve his weapon during confrontations with Palestinian protesters following the funeral of Hamzeh Youssif Zamaareh in Halhoul, near the West Bank city of Hebron, 17 February. Zamaareh was shot dead after he allegedly stabbed a security guard at the entrance to a nearby Israeli settlement | Wisam Hashlamoun APA images 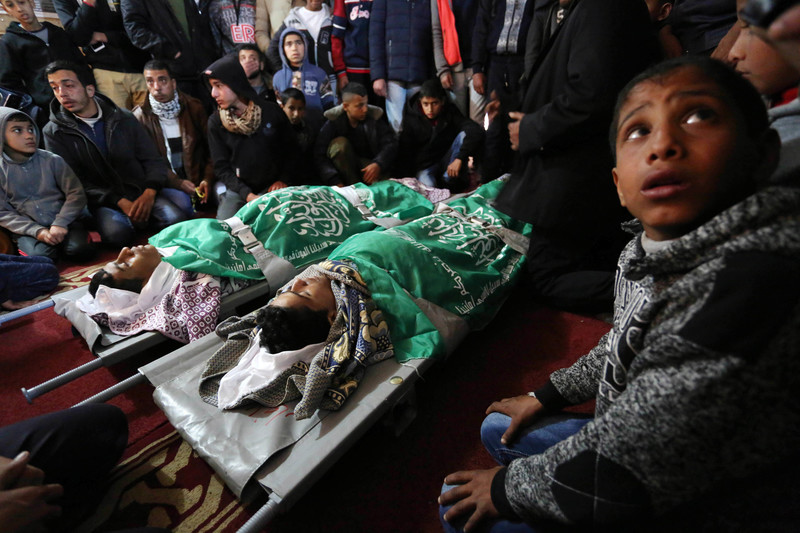 Relatives mourn over the bodies of two Palestinian boys who were killed by Israeli shelling, during their funeral in Rafah, southern Gaza Strip, 18 February | Ashraf Amra APA images 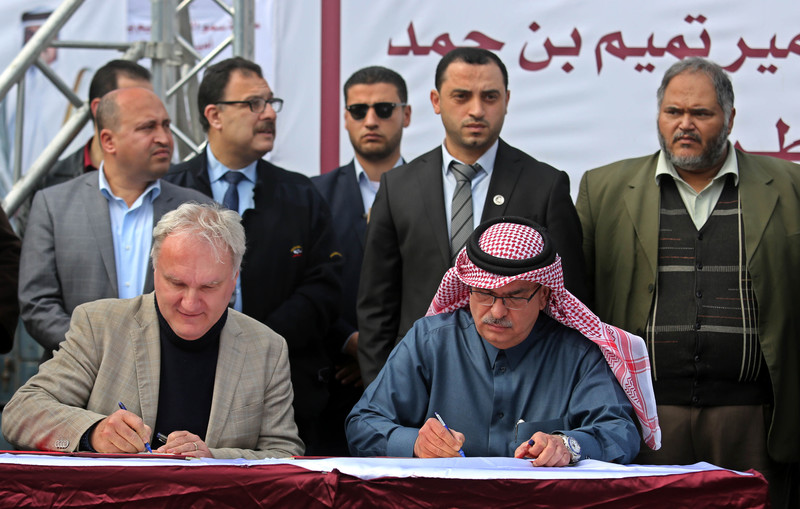 Qatar’s ambassador to the Palestinian Authority, Mohammed Al-Emadi, and Matthias Schmale, director of Gaza operations for the United Nations Relief and Works Agency, sign an agreement at al-Shifa hospital in Gaza City following the ambassador’s announcement that Qatar would grant $9 million to the hospital, 19 February | Ashraf Amra APA images 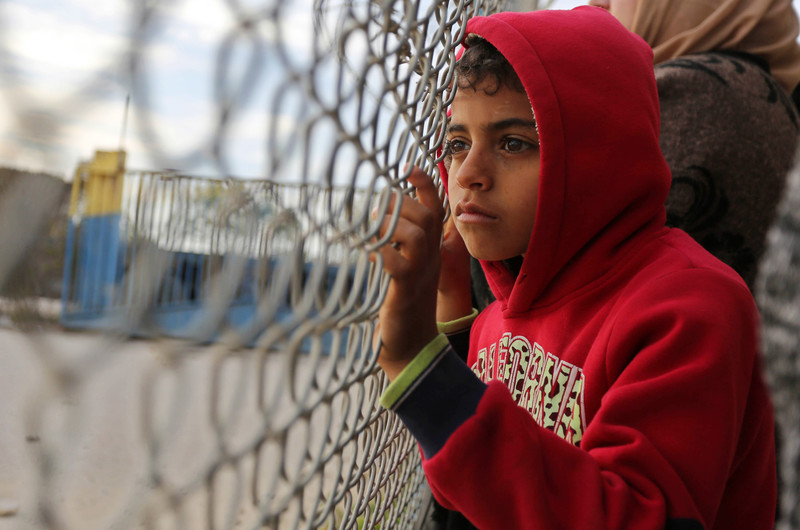 Palestinians wait for their relatives to return to Gaza after Egypt opened Rafah crossing for one day, 19 February | Ashraf Amra APA images 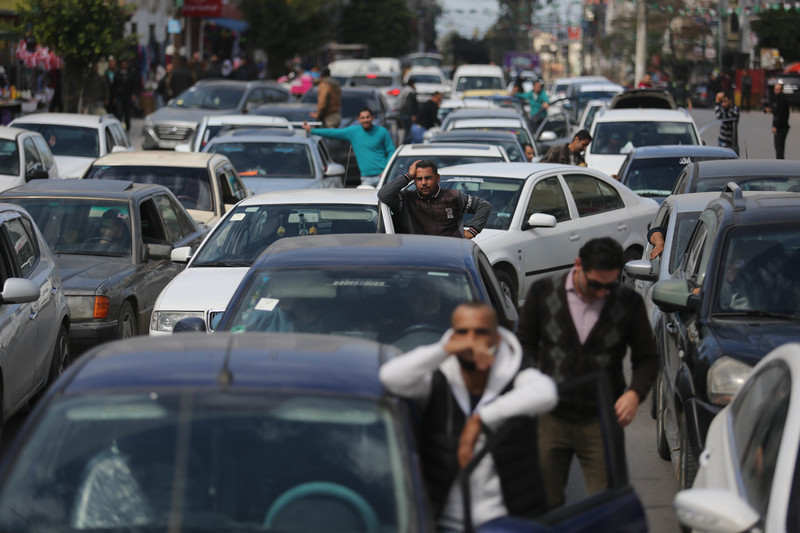 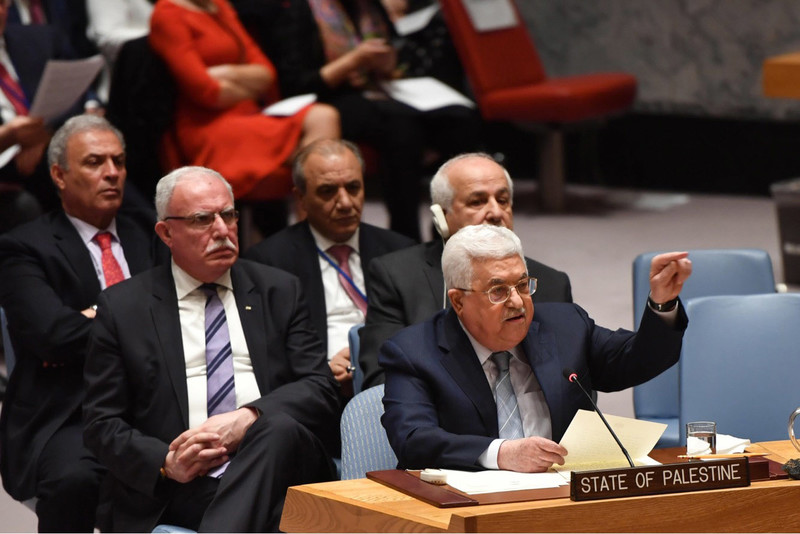 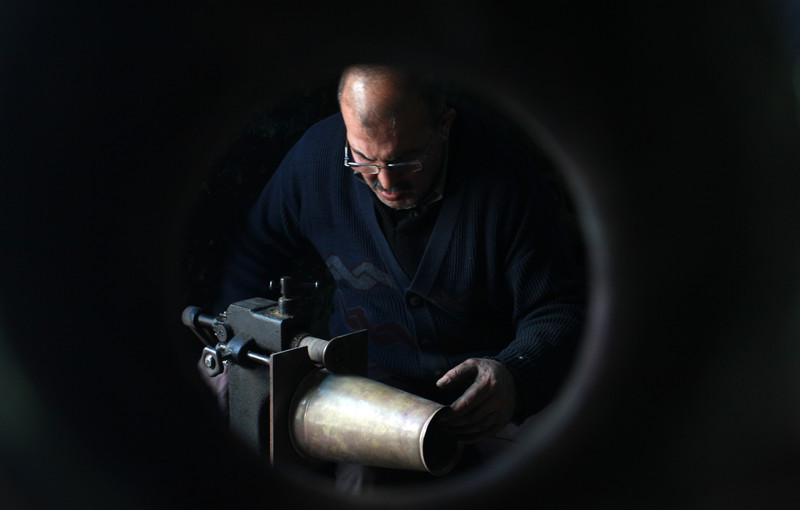 Coppersmith Muhammad Abdo works at his Gaza City workshop on 21 February. Abdo, who inherited the profession from his father, makes replica crescents for mosques. He is the only person who makes these items in Gaza | Mahmoud Ajour APA images 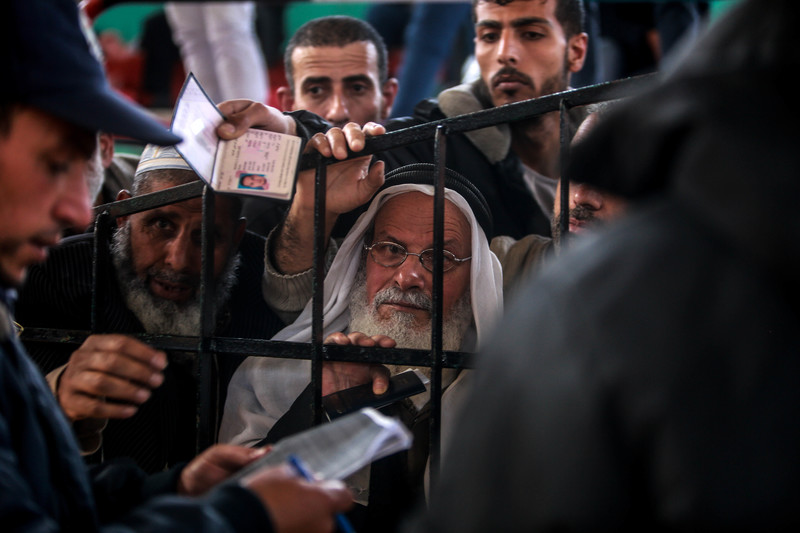 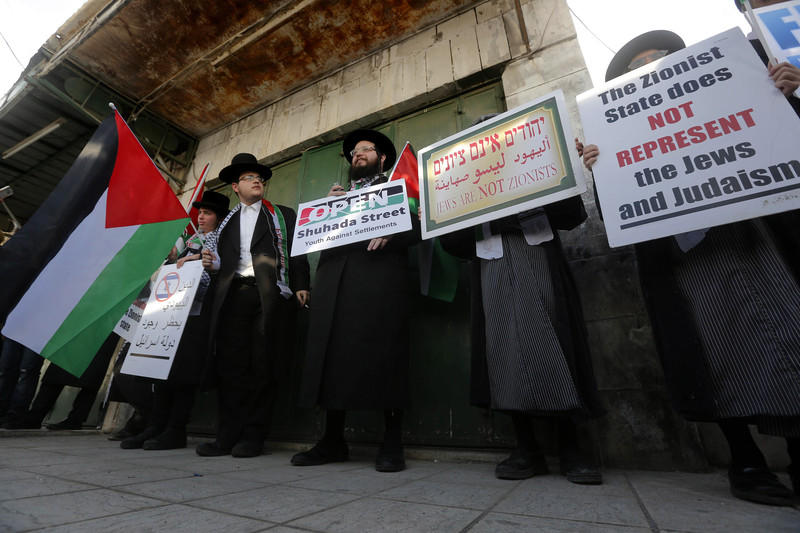 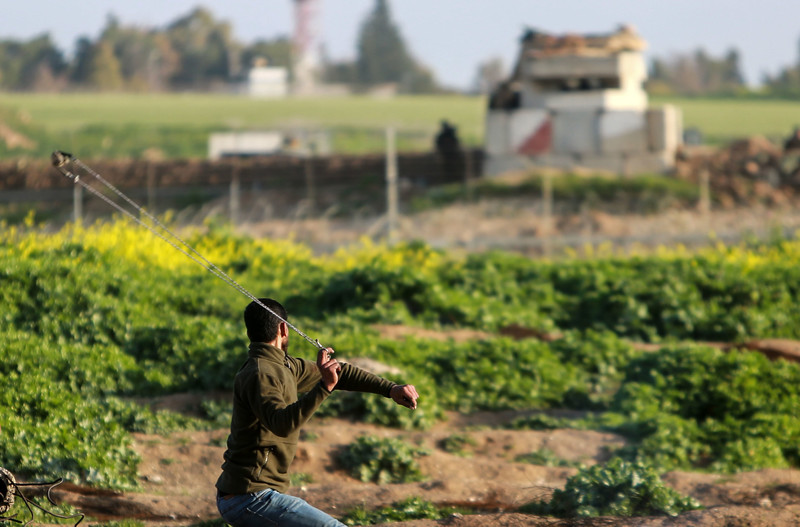 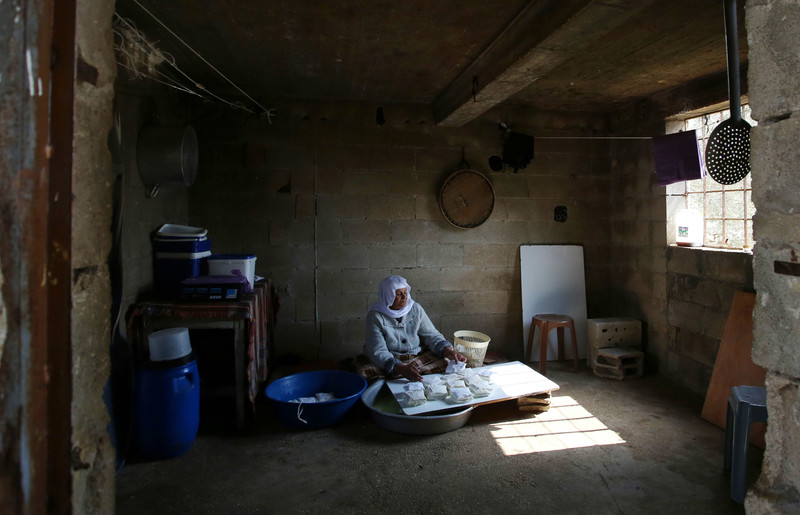 Hayat Zeid, 80, makes cheese inside her home in Kfairet village, near the West Bank city of Jenin, on 24 February. Zeid, whose family breeds sheep, has been making sheep milk cheese for 52 years | Ayman Ameen APA images 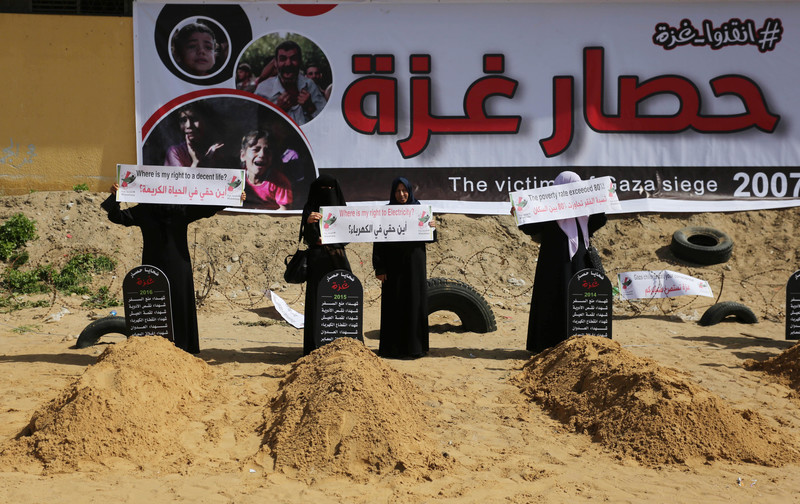 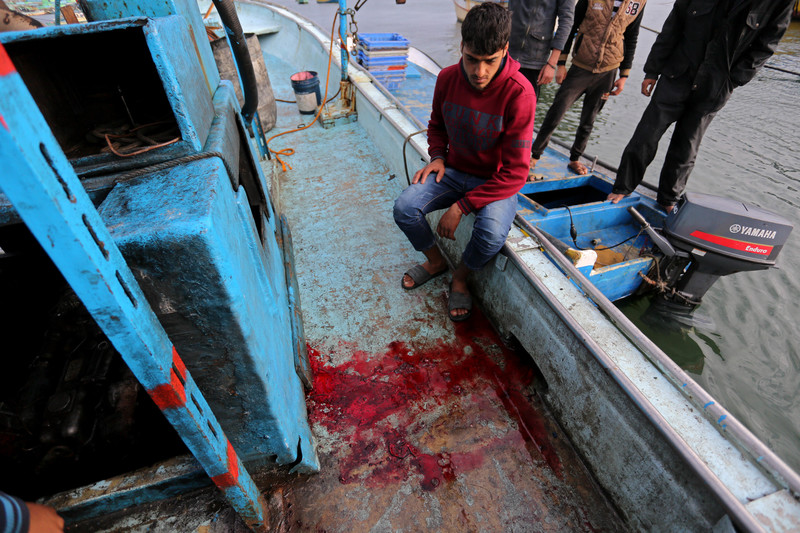 A Palestinian man inspects a boat at the Gaza City port on 26 February. Fisherman Ismail Abu Riyala, 18, was killed when the Israeli navy opened fire on the boat on which he and two others were working the previous day | Ashraf Amra APA images 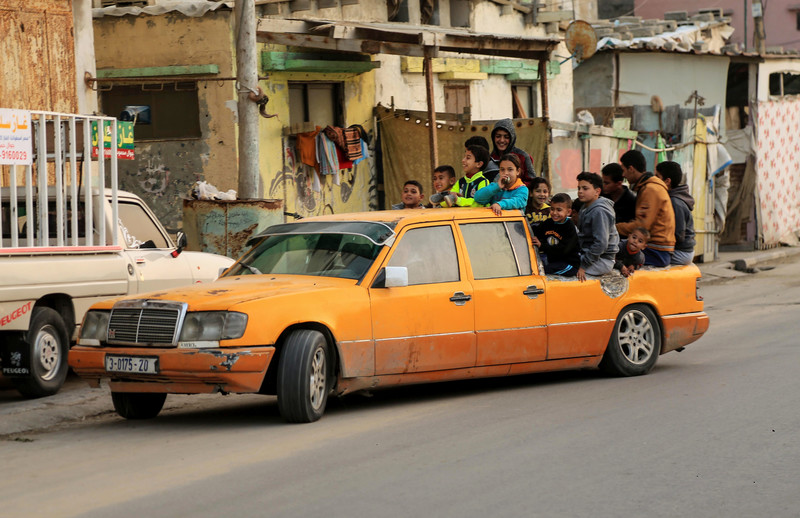 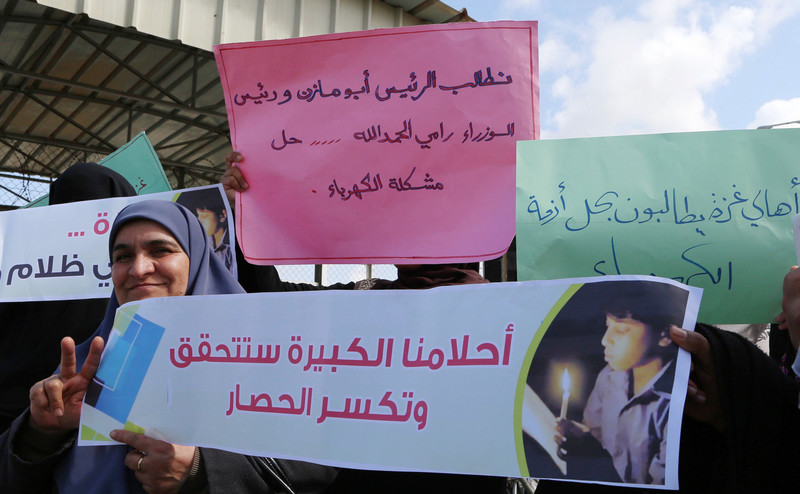