Commentators have spoken and written reams regarding U.S. President Trump’s imposition of tariffs, his refusal to sign a new NAFTA deal and the Mafia-style language used at the G7 Summit in Quebec. The incoherence masks the crisis in the G7 and the substance of the neo-liberal Summit | German-foreign-policy.com commentary 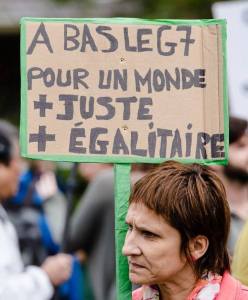 BERLIN (June 11 – The G7 summit in La Malbaie, Canada, ended in open dissent on Saturday without a joint final declaration. After the G7 state and government leaders had already agreed on a joint statement, US President Donald Trump withdrew his endorsement. The document is still supported by the other six G7 states and is occasionally referred to as the “G6” declaration, to point out the deep rift in the traditional West. Whereas German business circles still call for making concessions in the trade conflict with Washington, Foreign Minister Heiko Maas is considering new cooperation frameworks with states “beyond classical alliances, such as NATO.” This however would be in contrast to the agreement reached at the G7 summit on a mechanism aimed at a common response to cyber attacks and attacks such as the nerve agent poisoning in Salisbury. According to scholars of the German Bundestag, Moscow’s alleged responsibility has still not been proven.

Without a joint declaration

The G7 summit in La Malbaie, Canada, ended on Saturday without a final joint declaration. In the run-up to the summit, Berlin and the EU had tried to exert pressure, particularly in the dispute over US punitive tariffs on steel and aluminum and the conflict over the policy relating to Iran. In a joint letter sent to their US counterparts, the German, French and British foreign, economic and finance ministers “expect” that in its aggressive policy towards Teheran, Washington will “refrain” from taking action to “harm Europe’s security interests.” (german-foreign-policy.com reported.[1])

US President Donald Trump did not concede to the EU in La Malbaie and even left the summit early. At first – in open contradiction to his actual policy – he had agreed on the final statement, in which the signatories underline “the crucial role of a rules-based international trading system” and commit themselves “to modernize the WTO to make it more fair as soon as possible.”[2] However, within a few hours, Trump retracted his endorsement. The other six of the G7 states still uphold the declaration.

Losses in the billions

The attempt to adopt a final joint declaration was particularly in Germany’s interest, whereas France has previously emphasized dissent publicly. At the meeting of the G7 finance ministers, a week earlier in Whistler, Canada, French Finance Minster Bruno Le Maire publicly referred to a “G6 plus 1” rather than a “G7.”[3] Just before the summit opened, French President Emmanuel Macron argued in favour of eventually foregoing a joint communiqué – if Washington insists on its divergent course, therefore “isolating” itself – and “signing a 6 country agreement.”[4] Macron had also solicited the support of Canadian Prime Minster Justin Trudeau.

Particularly the German automobile business has warned against such an open rift. The German economy’s flagship would risk losses in the billions, should the trade conflict escalate and should Trump carry out his threat to impose punitive tariffs on German cars. “Even though the current situation is difficult, the dialogue must continue,” Bernhard Mattes, President of the German Association of the Automotive Industry (VDA) recently demanded.[5] Trump’s subsequent withdrawal from the joint final declaration has further reduced the chances of resolving the trade conflict.

Meanwhile, as long as the Trump administration refuses to give in on the key issues, Berlin is considering reinforcing its own position through temporary cooperation with other powers. For example, in a statement issued last week by the German Chancellery-financed Institute for International and Security Affairs (SWP) it was suggested that “serious opposition to the United States may also mean forging coalitions of the willing … . A G7 summit, like other traditional formats of multilateral politics, will no longer be the appropriate venue for doing this.”[6] Just before the opening of the G7 summit, Germany’s Foreign Minister Heiko Maas, publicly reflected on alternative forms of cooperation.

“The political Atlantic has become wider,” declared Maas. “To maintain our partnership with the USA, it must be recalibrated.” Now, we must actually “look to see with which structure we can still accomplish something.”[7] Germany is already engaged “in diverse project partnerships with other countries around varying themes” – “beyond classical alliances, such as NATO.” In the conflict around the nuclear deal with Teheran, for example, one is meanwhile “in an interest group comprised of Iranians, Russians and Chinese.” Maas considers that “many of the past decades’ certainties are no longer certainties today.”

RELATED: The irrationality of steel and aluminum tariffs: Failure of G7 seen in international trade agenda

However, the G7 summit raised doubts as to how far this avowal to an alternative cooperation structure will be kept. One of the few concrete results of the meeting was the agreement on a Rapid Response Mechanism (RRM), which is explicitly directed against “hostile states.”[8] Its task is to prevent “foreign interference” across the G7, and should it occur, take coordinated action. Cyberattacks as well as the Salisbury nerve agent attack are used as justifications for these reactions. Intelligence sharing among the G7 countries should also be intensified. The respective policies and the member countries’ thresholds for taking action will be discussed. Work with industry to strengthen physical and digital infrastructure should be reinforced. Together they seek a co-ordinated attribution of hostile activity and joint work to assert a common narrative and response. It is clear that the RRM is aimed primarily at Russia and China. It opens the door to arbitrary state action. The source of cyberattacks cannot be judged by the public and, in the majority of cases, cannot be dependably confirmed even by experts. However, a G7 country claiming it could, for example, name the culprit – thanks to its intelligence services – can set off a reaction at G7 level.

A good example is the nerve agent attack in Salisbury, where the United Kingdom blamed the Russian government. On the basis of actual or alleged, in any case not at all credible, intelligence reports, the majority of the EU and NATO member countries – including Germany – expelled altogether around 150 Russian diplomats. (german-foreign-policy.com reported.[9]) Since a few days, the Reference and Research Service of the German Bundestag has compiled an “assessment on the basis of international law” on this case. These scholars arrived at the conclusion: “Russia’s responsibility for the attack on the former agent Skripal in Great Britain has, until now, not been established.”[10] Also – contrary to what Berlin claims – “an apparent violation of Russia’s responsibilities under the Chemical Weapons Convention (CWC) is not to be found.”

However, what can be seen is merely the intention to intensify aggression against Russia. The G7’s Rapid Response Mechanism now provides a new margin of maneuver.

A photo by German chancellor Merkel’s staff photographer Jesco Denzel that was uploaded to her Instagram account:

Is that supposed to make her look good? Is it not similar to this scene?: