(September 25) – A chance encounter with a Twitter post got me following links on the internet today as I filled in time between classes. I know that there’s a lot of truly rotten stuff out there, and every now and again I write some piece denouncing some example or other. But on the whole, I try and stay clear of it. Still, immersing myself in all this was rather interesting, so I thought that I would share the results.

The Tweet which got me started was this one from Toronto-based Ukrainian-Canadian ‘political analyst’ Ariana Gic, who writes occasional columns for outlets like the Atlantic Council. I’m always rather sceptical of ‘independent analysts’ who seem to lack an institutional base, and am frankly amazed  that one can making a living that way, but apparently one can. Anyway, this is what Ms Gic had to tell us yesterday. 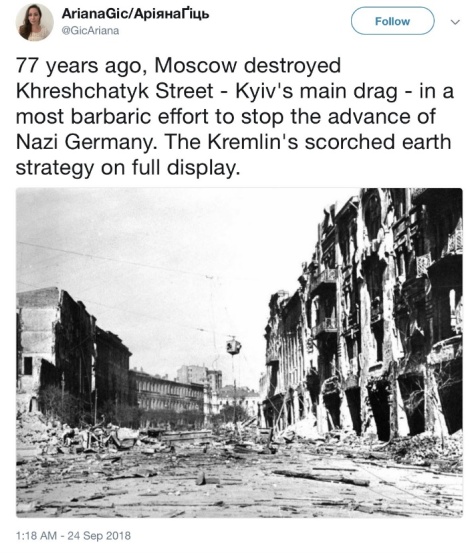 I don’t think that I need to discuss this, as I’m sure you can all see the point without further commentary, but it’s perhaps useful to add the fact that the officer commanding Soviet forces in Kiev until his death in combat on 20 September 1941 wasn’t an evil ‘Moskal’ but a Ukrainian, General Mikhail Kirponos. But that’s by the by. Not knowing anything about Ms Gic, I decided to see what else she has written. And then, following the links from what I found, I ended up discovering what a bunch of others have written recently too. Here’s some of the results:

1) The World Cup ‘revealed Russian chauvinism.’ According to a piece by Ariana Gic in the EUObserver, the World Cup displayed the nasty nationalism prevalent in the Russian population. This is a favourite theme of Ms Gic, who is keen that we should all know that Ukraine’s (and the West’s) real enemy is not Putin or his ‘regime’ but the Russian people. ‘Kremlin propaganda tapped into existing Russian exceptionalism, imperialism, chauvinism, & hatred of Ukrainians,’ she tells us on Twitter, adding that we must fight the ‘lie of the good Russians’.

2) Ms Gic’s Twitter account connected me to that of another Canadian activist, Marcus Kolga. A man of, I think, Latvian descent, Kolga played a prominent role in the lobbying which produced the Canadian Magnitsky Act. According one of his latest Tweets:

Interference in Canada’s 2015 election confirmed & there are constant attempts by Kremlin to undermine Canadian democracy, alliances + policy. Not simply a 2019 election interference problem but attack on democracy.

I read the Canadian newspapers every day and have yet to see any indication of Russian interference in our 2015 election. But never mind. Kolga tells us it’s ‘confirmed’! Pursuing him a bit further, I discovered a bunch of articles he’s written for publications like the Toronto Sun. In one of these he informs us that the Russian annexation of Crimea was just like the Soviet annexations of the Baltic States in 1940 and that Vladimir Putin is involved in ‘relentless attempts to deny the Soviet occupation and repression of these nations.’ This is odd, as I’ve never seen any such attempt. But I’m just an academic who’s written a couple of peer-reviewed articles about Putin’s speeches. What do I know?

Kolga will be one of the panelists at a seminar held by the MacDonald-Laurier Institute here on Ottawa on September 27. The blurb for the seminar tells us:

Russia uses hybrid or asymmetric tactics to advance its goals in Eastern Europe and beyond. … An important element is its use of disinformation and offensive cyber activities. Russian websites have already tried to spread vicious rumours about NATO troops in the Baltics. Closer to home they have spread rumours about the family history of Canada’s foreign minister and have worked to manipulate aspects of Baltic history in an effort to marginalize their security concerns. Kremlin meddling was clearly a factor in the US, French and German elections and Canada can expect the same in future elections. … To shed light on this issue, MLI is hosting a panel event that will bring together some of the leading thinkers on the strategic threat posed by Russia.

It’s nice to see that this well-balanced seminar hasn’t predetermined the issue of the Russian ‘threat’. * I have better things to do than spend a couple of hours listening to how terrible it is to ‘spread rumours [sic] about the family history of Canada’s foreign minister.’ I won’t be attending.

3) After a diversion into the territory of Mr Kolga, Ms Gic next directed me to something by Paul Goble, whose work I generally avoid. In a recent article for Euromaidan Press, Goble claims that in Donbass, ‘Moscow is replacing local people with Russians.’ Citing ‘US-based Russian journalist Ksenia Kirillova,’ Goble tells us that locals are being arrested and ‘replaced by new arrivals’ from Russia. ‘Most of them are coming from Vorkuta and Irkutsk’, says Goble, adding that

Kirillova does not say, but it is clear from her interviews that the “DNR” officials backed by Moscow are interested in promoting the departure of the older residents and their replacement with more malleable and thus reliable Russians from distant regions of the Russian Federation.

Ariana Gic comments that Goble’s story tells us that Russia is trying to ‘forcibly change the demographics of the local population in occupied Ukraine’. This amounts to ‘ethnic cleansing, and a war crime under Art 49 of the Fourth Geneva Convention,’ she says. Think about this for a moment. Just how many Russians would you have to import from Vorkuta and Irkutsk in order to reconfigure the demographics of Donbass? And just how how many Russians do you imagine are going to want to move to a war zone with an almost non-existent economy? To quote John McEnroe, ‘You cannot be serious.’

4) After pursuing these links a bit more, I finally, and I know not how, ended up on a page full of Twitter postings by Andreas Umland, which in turn directed me to a gem of an article by Paul Knott in the New European, entitled ‘Meet the Most Dangerous Man in the World.’ And who is the ‘most dangerous man in the world’? Alexander Dugin, of course. Knott notes that those who have studied Dugin, like Marlene Laruelle of The George Washington University, consider his influence exaggerated. But facts and scholarly analysis be damned! Knott knows better. ‘Dugin is heavily promoted by the Kremlin-controlled Russian media and has strong ties to the military,’ he tells us, adding that Vladimir Putin ‘is in thrall to him.’ ‘The substantial influence Dugin exerts over ultra-powerful people like Putin and, indirectly, Trump, makes him a frightening figure,’ says Knott. Dugin as the puppet master of Donald Trump? Is that what we’ve come to now? Knott was a British diplomat for 20 years. It makes you wonder about how they do their recruiting in the Foreign and Commonwealth Office.

Reading all this, one feels like one is living in wacko-land. And it’s just the tip of the tip of the iceberg. One of the organizations Ms Gic writes for is ‘Stop Fake’. If only!

Paul Robinson is a professor at the University of Ottawa  who writes about Russian and Soviet history, military history, and military ethics. Links to his books are available in the ‘Books’ menu on his blog, Irrussianality.

“MLI is hosting a panel event that will bring together some of the leading thinkers on the strategic threat posed by Russia.” According to the Hill Times (September 27), “In Ottawa, the Macdonald-Laurier Institute is hosting a panel discussion on the challenge Russia poses to North American and European security. Guest speakers include Jānis Garisons, Latvia’s state secretary of defence, and Prof. Tim Nichols of the U.S. Naval War College. (10 a.m. at 323 Chapel St.).” Latvia is engaged in the rehabilitation of fascism, defended by the Canadian Forces. The Second Fleet of the U.S. Navy, recently formed to counter the alleged “Russian submarine threat” in the North Atlantic and the Arctic oceans, just held a massive exercise off the coast of Nova Scotia, including the Harry Truman Carrier Strike Group – yes, strike  group – completely blacked out by the media. Far from being “defensive,” the exercise rehearsed the rapid movement of troops and war materiels to Europe. A “balanced”panel to be sure. A “panel” in Ottawa makes the news; an exercise in offensive war preparations involving 6,500 troops, two aircraft carriers, and guided missile destroyers held partly in Canadian territorial waters and the harbour of Halifax does not.