The U.S.-Canadian collaboration in supporting terrorism is being heroized. In another stunning revelation of the foreign links to the extremists in Syria, the U.S.-led Halifax war conference opening today “will offer delegates an off-the-record session with Raed Al Saleh, co-founder of Syria Civil Defence, a group of volunteer rescue workers better known as the White Helmets” (emphasis added).

Attendance at the HISF is by invitation only.

The White Helmets are a U.S./NATO front for foreign intervention and regime change in Syria and linked to Nusra Front and other al-Qaeda-linked terror organizations.  Saleh had even been deported from Dulles Airport in April 2016, ostensibly for his “extremist connections” as incriminated by former U.S State Department spokesperson, Mark Toner. The mafia organizers are presenting them as NATO’s “heroes,” but keeps these “rescuers” behind doors while the entire conference is closed, admission is by invitation only and all expenses are paid. This should leave little doubt in anyone’s mind as to whose interests the so-called humanitarian rescue group serves and the motive behind this chauvinistic presentation.

A December 2016 TML Weekly article, which called the group “part of the imperialists’ private special forces on the civilian front,” stated, “They reinforce the aim of regime change in Syria, including acting as auxiliaries for anti-government armed groups that are financed by the imperialists which Canada supports.” [1]

Earlier this year, the same Raed Al Saleh came to the United States to receive McCain Institute “Award for Courage and Leadership”at the invitation only Sedona Forum April 20-22, 2018, hosted by the McCain Institute for International Leadership. He was accompanied by Kenan Rahmani of the Syria Campaign. That event was attended by U.S. top leadership, including Mike Pompeo, Secretary of State and former Director of the CIA, and John Mattis, Secretary of Defense.

At 2018 Sedona Forum, the McCain Institute presented its annual Award for Courage and Leadership to @SyriaCivilDef for their heroic, brave work conducting volunteer search & rescue missions in Syria. https://bit.ly/2F3VwBB 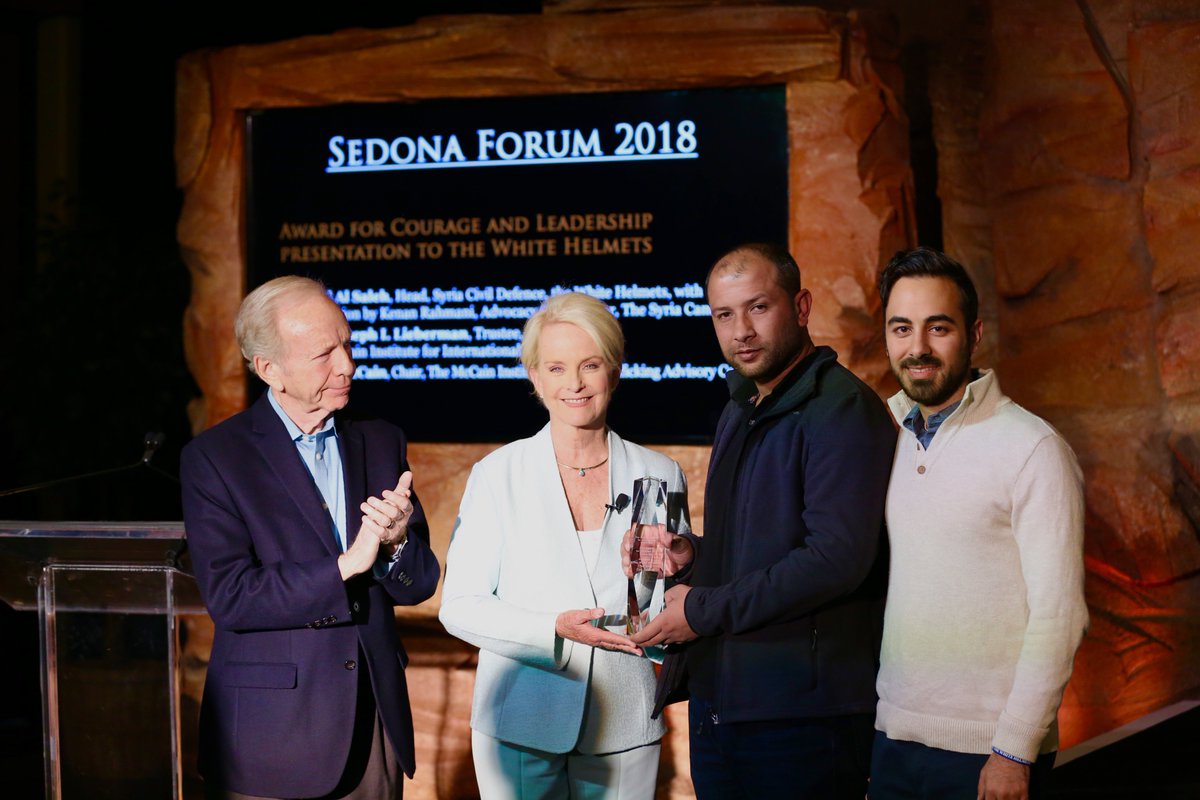 The McCain Institute’s “human rights” director David Kramer, former president of Freedom House and associated with Alliance for Securing Democracy, and its executive director Kurt Volker, former U.S. ambassador to NATO,  are closely linked with the Halifax International Security Forum, being members of the board and its agenda working group respectively. Both worked for the U.S. State Department.

U.S. Senator John McCain, the warmonger and advocate of American exceptionalism after whom the institute is named and head of the International Republican Institute, had longstanding ties with the HISF.  The institute is funded by many arms and energy monopolies as well as the government of the feudal kingdom of Saudi Arabia.

Coming almost immediately after the heaping of praise upon the group by Nauert, the McCain stamp of approval is further evidence of the overt ties between the U.S state and their most useful intelligence operatives on the ground in Syria.

The general decorates the Jabhat al-Nusra terrorists – inside Syria. On May 26, 2013 McCain made an illegal trip inside Syria from Turkey to meet with then commander of the FSA, Gen. Salim Idriss and others. It came precisely when the Syrian Arab Army was making steady advances against the terrorists. The trip was made with the assistance of the U.S. State Department and designed to boost the sagging morale of the foreign-organized and funded terrorist forces. He also met with insurgents in Turkey. The photo was distributed by McCain’s office.

McCain was second to none in using the Halifax podium to champion wars of aggression against Libya, Syria and Iran. At the 2011 HISF, McCain was the first U.S. official to issue a public call (on November 19) for formal recognition of the Syrian National Council and its proxy army of mercenaries and jihadists, the “Free Syrian Army” (FSA) as the official U.S.-NATO instrument for destabilizing Syria and regime change. The HISF invited George Sabra, SNC’s second president, to its 2013 conference.

In May 2018 a State Department official told CNN that the U.S. had provided $33 million to the White Helmets since 2013. Its largest single backer, though, is said to be the British Foreign Office. A spokesperson for Global Affairs Canada said recently that Canada had given $7.5 million to the group over two years. TML Weekly informed this September:

“After four years of financing and promoting the White Helmets, NATO arranged for the Israeli military to evacuate 98 of its assets and their families from

on the weekend of July 21-22. The evacuation took place as Syrian government forces were liberating the last remaining pockets of terrorist-controlled territory in the southwest of the country.

“Foreign Minister Chrystia Freeland and Prime Minister Justin Trudeau are said to have used “formal interventions” at the NATO summit on July 11-12 to draw attention to and enlist support from other member countries for the evacuation and resettlement of their assets. Germany and Britain in the end also agreed to accept a limited number of White Helmets and their families.

“According to unnamed sources cited by CBC, former Liberal Justice Minister Irwin Cotler, a Zionist warmonger who poses as a ‘human rights expert’ and is knee-deep in conspiring with the Secretary General of the Organization of American States to force regime change in Venezuela, was enlisted by Canada to help broker the smuggling arrangement with Israel.” [3]

Any challenge to the official U.S.-NATO narrative about the role the White Helmets have been playing is typically dismissed as the product of a Russian “disinformation campaign” against the group.

The role Canada and the Halifax International Security Forum is playing in support of the U.S.-led war of terror in Syria should be rejected with contempt. Any suggestion that its actions are based on humanitarian considerations, concern for human rights, democracy, women’s rights or any other high ideal is disinformation. The time is now to rally against the Halifax war conference, organize for an anti-war government and  make Canada a zone for peace.

A White Helmets’s delegation, headed by Raed Al Saleh, was again invited to the 2019 HISF conference.

[2] At the time, Sabra was publicly defending al-Nusra, which according to different reports, was being directed by the Muslim Brotherhood from Turkey. The Iran Review reported, on December 23, 2012 that ”Al-Nusra Front is an organized armed group with high influence in Syria which has been recently blacklisted by the United States as a terrorist group. It is present throughout Syria from northern border of the Arab country close to Turkey, down to Syria’s border with Lebanon. Out of all armed groups fighting against the Syrian government, it has more trained militants and more advanced weaponry.

“… the United States’ decision to blacklist Al-Nusra Front as a terrorist group was actually aimed at making the leaders of the Syrian Muslim Brotherhood and political groups affiliated to them such as the ‘Syrian National Council,’ and ‘Syrian Coalition of Secular and Democratic Forces,’ to reveal their true colors by protesting to that decision. It is noteworthy that George Sabra, the new chairman of the Syrian National Council, as well as Mouaz al-Khatib, head of the Syrian Coalition of Secular and Democratic Forces, and some other opposition figures, have already protested to Washington’s decision.” (Who Are the Most Heavily Armed Opponents of Bashar Assad?)

[3] See Margaret Villamizar, “White Helmets Smuggled Out of Syria by Israel for Resettlement in Canada, Other NATO Countries,” TML Weekly, September 1, 2018 – No. 29.