What does the RCMP raid on Wet’suwet’en territory mean? 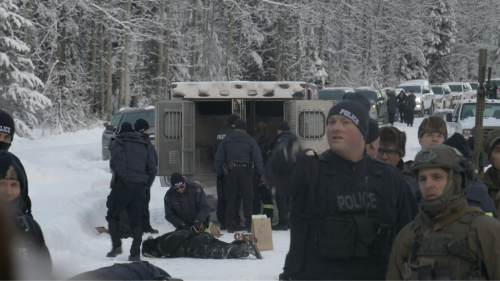 January 8, 2018 — Thousands of people across Canada and around the world are watching and sharing updates online as RCMP officers dismantle a pipeline blockade on Wet’suwet’en territory in Northern BC.

The Gidimt’en are one of the five Wet’suwet’en clans, who all oppose the construction of oil and gas pipelines in Wet’suwet’en territory. In December, the Gidimt’en set up a gate to strongly support a peaceful resolution at the Unist’ot’en camp 20km away, where Coastal Gaslink wants to put the pipeline.

Yesterday afternoon, police broke down a wooden gate and arrested several people at the Gidim’ten Checkpoint, a camp on a snowy forest service road along the Morice River southwest of Houston. The Gidim’ten or Gitdumden are one of five clans that make up the Wet’suwet’en Nation.

Farther up the road lies the Unis’tot’en Camp, a homestead maintained over the last nine years by members of the Unis’tot’en house group, part of a different Wet’suwet’en clan on adjacent territory. Police have assembled tactical vehicles and earth-moving equipment, but must pass the Gidem’ten checkpoint to reach the Unis’tot’en Camp.

Hereditary leaders for all five clans have withheld consent for new pipeline construction across Wet’suwet’en territories, which is what prompted the raid.

Allies have organized solidarity events Tuesday, January 8 in dozens of communities across Canada, to denounce this use of police force against Indigenous people asserting their rights on their own land.

Many Canadians have heard of the 1997 Delgamuukw decision by the Supreme Court of Canada, which recognized that Aboriginal title still exists in places where Indigenous nations have never signed a treaty with the Crown. In fact, the court was talking about the land where this raid is taking place.

Delgamuukw is a chief’s name in the neighbouring Gitxsan Nation, passed down through the generations. Delgamuukw was one of dozens of plaintiffs in the case, comprising hereditary chiefs from both the Gitxsan and Wet’suwet’en Nations.

Together those leaders achieved an extraordinary milestone in forcing the Canadian courts to affirm the legitimacy of their oral histories, traditional laws and continuing governance of their lands. But it wasn’t until the Tsilhqot’in decision in 2014 that the Supreme Court went a step further, recognizing Aboriginal title over a specific piece of land.

If the Wet’suwet’en chiefs went back to court all these years later, many legal scholars say the strength of their claim to their territories would eventually force the Canadian government to relinquish thousands of square kilometres within the Bulkley and Skeena watersheds — and stop calling it “Crown land”.

That’s why the TransCanada pipeline company acted quickly, to secure an injunction against Wet’suwet’en members blocking construction before the legal ground could shift under their Coastal Gaslink project.

The 670-kilometre pipeline project would link the fracking fields of Northeastern BC with a huge liquid gas export terminal proposed for Kitimat. Called LNG Canada, this project is made up of oil and gas companies from China, Japan, Korea and Malaysia, along with Royal Dutch Shell.

The BC Liberal, BC NDP and federal governments all courted the LNG Canada project, offering tax breaks, cheap electricity, tariff exemptions and other incentives to convince the consortium to build in BC. Both Christy Clark and Premier John Horgan celebrated LNG Canada’s final investment decision last fall, calling it a big win for the province.

However, without a four foot diameter (122cm) pipeline feeding fracked gas to the marine terminal, the LNG Canada project is a non-starter.

That brings us back to the Morice River, or Wedzin Kwa in the Wet’suwet’en language. This is where the rubber hits the road for “reconciliation”. Politicians are fond of using the word, but seemingly uncomfortable with its implications.

Politicians also talk a lot about the UN Declaration on the Rights of Indigenous People, and how to enshrine it in BC law. Article 10 of UNDRIP states that “Indigenous peoples shall not be forcibly removed from their lands or territories.” It is hard to see how these arrests are consistent with this basic right.

Pro-pipeline pundits are already working hard to spin this raid as the “rule of law” being asserted over the objections of “protestors”. They point to benefit agreements signed between TransCanada and many band governments along the pipeline route.

But under the Indian Act, elected councillors only have jurisdiction over reserve lands — the tiny parcels set aside for First Nations communities that are administered much like municipalities. That’s not where this pipeline would go.

What is at stake in the larger battle over Indigenous rights and title are the vast territories claimed by the Crown but never paid for, conquered or acquired by treaty. In Wet’suwet’en territory, those lands, lakes and rivers are stewarded by hereditary chiefs and their relatives under a governance system that predates the founding of Canada.

My prediction: history will not look kindly on politicians who condone the use of force against local people on behalf of a multinational oil and gas consortium. I hope the response from British Columbians to these events give our leaders pause as they contemplate their next move. 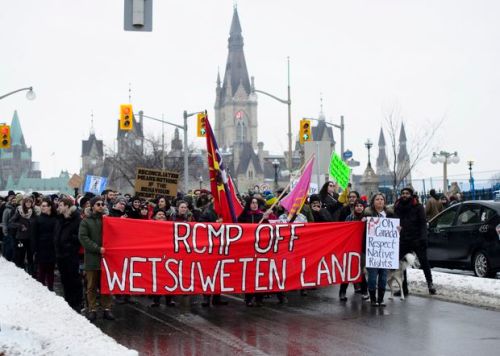 Protesters voice their opposition against pipelines as they block traffic in front of the Prime Minister’s Offices in Ottawa on January 8. Protests in support of the Wet’suwet’en were held in downtown Ottawa, Toronto and dozens of other cities across Canada on the day after the arrests.

For full event listings and additional events as they are announced: Facebook

Statement of the Union of BC Indian Chiefs

The Union of BC Indian Chiefs (UBCIC) is gravely concerned about the safety and well-being of the Wet’suwet’en land defenders as the RCMP set up nearby the Gidimt’en camp to enforce the interim injunction from the BC Supreme Court in December 2018, which supports Coastal Gaslink beginning construction on a 700km natural gas pipeline and transformation plant.

The Gidimt’en are one of the five Wet’suwet’en clans, who all oppose the construction of oil and gas pipelines in Wet’suwet’en territory. In December, the Gidimt’en set up a gate to strongly support a peaceful resolution at the Unist’ot’en camp 20km away, where Coastal Gaslink wants to put the pipeline.

UBCIC President Grand Chief Stewart Phillip stated “We strongly condemn the RCMP’s use of intimidation, harassment, and ongoing threats of forceful intervention and removal of the Wet’suwet’en land defenders from Wet’suwet’en unceded territory. In continuing to aggressively threaten the Wet’suwet’en with eviction from their own Title land, the governments of Canada and British Columbia are blatantly ignoring the Supreme Court of Canada’s precedent-setting Delgamuukw case which confirmed that the Wet’suwet’en’s Title and Rights have never been extinguished. The RCMP’s actions are in direct contradiction to both governments’ stated commitments to true reconciliation, and to full implementation of the United Nations Declaration on the Rights of Indigenous Peoples which is a global human rights standard. We demand that Canada and BC call on the RCMP and Coastal GasLink to respect the Unist’ot’en/ Giltseyu-Dark House on unceded lands. The provincial and federal governments must revoke the permits for this project until the standards of free, prior and informed consent are met.”

The RCMP is planning ‘an act of war’ to remove Indigenous protesters from blocking construction of a natural gas pipeline in northwestern BC, the Gidimt’en clan Facebook page informed on January 5.

The clan has been maintaining a checkpoint keeping Coastal GasLink, a subsidiary of TransCanada Corp., off traditional Wet’suwet’en Nation territory south of Houston. The RCMP informed that specially trained tactical forces will be deployed to forcibly remove Wet’suwet’en people from sovereign Wet’suwet’en territory, the post said.

The Gidimt’en post said they met Friday, January 4 with members of the RCMP Aboriginal Police Liaison Unit and learned action to enforce a court injunction is imminent. “Police refused to provide any details of their operation including the number of officers moving in, the method of forcible removal, or the timing of deployment,” the Gidimt’en said.

“By rejecting the requests for information the RCMP indicated that they intend to surprise and overwhelm the Wet’suwet’en people who are protecting their territories on the ground,” the post added.

“The RCMP’s ultimatum, to allow TransCanada access to unceded Wet’suwet’en territory or face police invasion, is an act of war.”

The checkpoint is 20 kilometres from the Unist’ot’en Camp established 10 years ago along the route of three proposed pipelines, including the one Coastal Gaslink is building, in an effort to stop them. It has since become a land-based wellness centre on the shores of the Morice River, close to the pipeline route. The pipeline will carry fractured natural gas 647 kilometres from Dawson Creek to coastal Kitimat where it will be processed and shipped.

Camp members have refused to allow Coastal GasLink employees to cross the Morice River bridge. They have the support of five hereditary chiefs in rejecting fossil fuel development.

The company, which has claimed in the past that it only wants access to its construction camp and is not asking for the camp to be cleared, turned to the courts and won an interim injunction on December 14 giving it access to the bridge across the Morice River and one kilometre down the road from the camp where the pipeline will run. BC Supreme Court Justice Marguerite Church agreed work should not be delayed further on the $40-billion construction project.

The injunction gives the RCMP the power to back up the court order.

• Actions across the country say No! to state attack on Unist’ot’en land defenders

4 responses to “What does the RCMP raid on Wet’suwet’en territory mean?”