Four-phase Montevideo mechanism for  peace and dialogue in Venezuela

Delegations of Mexico, Uruguay and CARICOM in Montevideo, February 6, 2019.

Venezuelan President Nicolás Maduro on February 6 gave “absolute support” to a four-phase plan designed by the countries of the Caribbean organized in CARICOM, along with Mexico and Uruguay, for Peace and Dialogue in Venezuela titled the Montevideo Mechanism. On February 7 a meeting was held in Montevideo co-hosted by Uruguay and the European Union and attended by representatives of eight European Union member states (France, Germany, Italy, The Netherlands, Portugal, Spain, Sweden and the United Kingdom) as well as Costa Rica, Bolivia and Ecuador, reported to be members of an EU-initiated International Contact Group (ICG) on Venezuela. The aim of the meeting was said to be to explore ways and means of fostering a negotiated, political settlement to the crisis in Venezuela without the use of force. 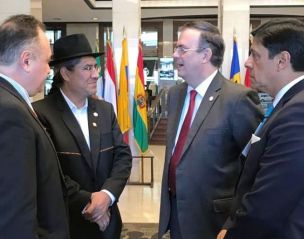 While most countries in the ICG have recognized Juan Guaidó as Venezuela’s “interim president” and went into the meeting calling for elections to be held “as soon as possible,” Mexico, Uruguay and CARICOM went with a proposal of their own titled the Montevideo Mechanism, which they said was guided by the principles of non-intervention, legal equality of states, peaceful resolution of the controversies, respect for human rights and self-determination.

As could be expected, the meeting was unable to reach a consensus. The EU-led group of countries issued a statement in the name of the ICG conditioning a resolution to the crisis on the holding of elections, and humanitarian aid and a technical mission being sent into Venezuela without seeking the consent of the government of that country, which is a violation of international law. Mexico and CARICOM took the high road and stuck to their guns, as did Bolivia. They did not conciliate with the EU-led attempt to set preconditions for any negotiations and its attempt to dictate matters that belong solely to the Venezuelan people, such as the holding of elections. Uruguay on the other hand signed the ICG declaration. At the meeting, Bolivia’s Foreign Minister Diego Pary formally signed on to the Montevideo Mechanism on behalf of his government and urged those who had imposed illegal sanctions against Venezuela, including the EU, to lift them, saying the blockade against Venezuela is what is affecting the economy.

A further meeting is planned in early March.

Note: Unlike the Lima Group, no foreign media were banned in advance – the Canadian government blocked Russian and Venezuelan media from covering the Lima Group meeting in Ottawa on February 4, an act of suppression of press freedoms that occasioned no outcry at all in Canada. 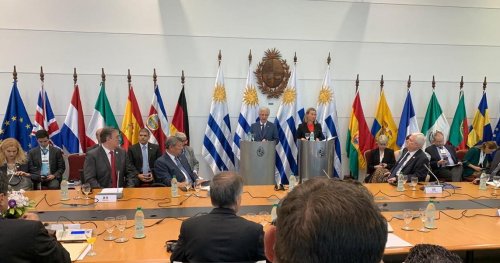 The governments of Mexico, Uruguay and CARICOM, in response to the call of the Secretary General of the United Nations, Antonio Guterres, agree that the most appropriate way to address the complex situation that prevails in Venezuela is through dialogue for a negotiation, from a position of respect for International Law and Human Rights. The historical stance of our countries is and will always be to privilege diplomacy over other alternatives, as it is the only way to achieve sustainable, legitimate and effective peace and stability.

Therefore, we propose the Montevideo Mechanism, based on our legitimate interest and willingness to assist the Venezuelan people and the actors involved find a solution to their differences. This initiative is offered to the Venezuelan actors as a peaceful and democratic alternative that privileges dialogue and peace, with the aim to create all necessary conditions for an inclusive, comprehensive and lasting solution.

This Mechanism, evidence of an active, proactive and conciliatory diplomacy to bring the disputing parties closer together, avoid conflict and violence, is guided by the principles of non-intervention, legal equality of the States, peaceful solution of the controversies, respect for human rights and self-determination.

Based on the experience of the signatory countries in processes of mediation and peaceful conflict resolution, we propose to establish a four-phased process, which will develop during a reasonable period of time, previously agreed by the parties:

1. Dialogue Phase: Creating conditions for direct contacts among the actors involved, in an environment of security.

2. Negotiation Phase: Strategic presentation of the results of the previous phase to the counterparts, seeking to find common ground and areas of opportunity to allow the relaxation of positions and identify potential agreements.

3. Commitments Phase: Construction and subscription of agreements based on the results of the negotiation phase, with the characteristics and timeframe, previously agreed upon.

4. Implementation Phase: Materialization of the commitments assumed in the previous phase with the international accompaniment.

The subscribers of this statement agree that the complexity of the circumstances should not be a reason to dismiss the diplomatic channels for dispute settlement, and reiterate our decision to help restore the tranquility of the Venezuelan people, through dialogue and peace, reducing tensions between political forces and avoid the threat or use of force.

Likewise, our governments reiterate their concern about the serious humanitarian situation and respectfully exhort all parties to guarantee the validity of the Human Rights and the freedoms established in the UN Charter, subscribed by Venezuela.

This Mechanism is our proposal to guarantee a peaceful and democratic solution that prevents an escalation of violence. In the event that the parties decide to communicate, we would invite Mrs. Rebeca Grynspan, former Vice-President of Costa Rica and current Ibero-American Secretary General, Mr. Enrique Iglesias and Mr. Bernardo Sepúlveda, ex Foreign Ministers of Uruguay and Mexico, and Sir David Simmons, former Chief Justice of Barbados, as a high representative of CARICOM, personalities of recognized international experience and moral quality, to accompany this Mechanism.

Statement by ALBA-TCP on the mechanism of Montevideo

The countries of the Bolivarian Alliance for the Peoples of Our America-People’s Trade Treaty (ALBA-TCP), based on their  profound mission for peace and respect for International Law:

Filed under Americas, No Harbour for War (Halifax)