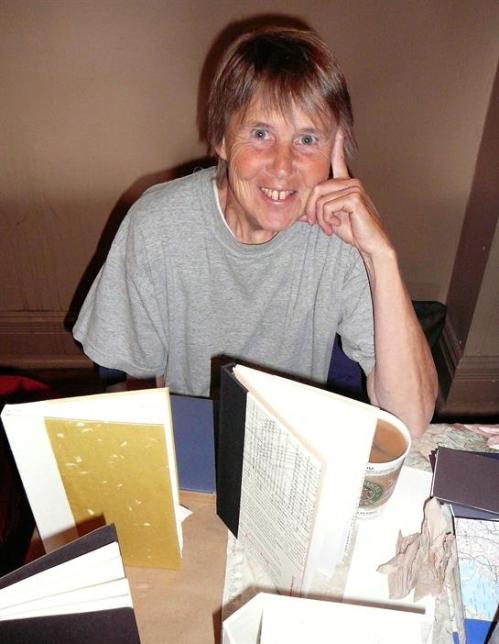 Edna died on April 24, 2019 of assisted suicide, ending years struggling with a rare form of dementia that gradually robbed her of her vision, language and cognitive skills, and her ability to ride her beloved bike. Edna was my proofreading boss at Harlequin Books in 1976-77 and my good friend for 43 years. She was one of 26 co-founders of FEAC, now Editors Canada, in 1979, serving as secretary and advocate. She also advocated for Casey House and gay rights. Few realized how many dying friends with AIDs she cared for over the years. She advocated building more bike lanes, public libraries, and small houses, like the 12 that she’d owned and renovated on an editor’s salary. The best was the union hall on Barker Avenue, which she turned into a studio/home, and its backyard, into a big vegetable garden.

At 13, she ran away from her home in Boston, making it to Chicago, no mean feat for a kid in 1965. Later on, she spent a month in Utah, tracking down her brother who’d gone AWOL from the army. Both stories suggested that the diminutive Edna had a formidable personality and would make a good godmother to my kids. She did not disappoint.

Edna edited or copyedited more than 1,000 books. Her most favourite were Peter Gzowski’s Morningside Papers. When not freelancing, Edna would make quilts, knit sweaters, design cards and boxes, bind books, bake bread, garden, or go for walks or bike rides, all with cheerful enthusiasm. The sight of Edna arriving at our house on her pink scooter, dressed in black leather and a white helmet, stopped the Bloor Westenders in their tracks. It also inflamed many a driver, who tried to run her off the road. Edna could be exasperating to work with, capable of arguing over picayune details, which sometimes ended writing friendships; however, she got on well with the musicians with whom she played the flute or recorder. Music and books were her chief joys in life, and her cats.

About ten years ago, she and my mother, also blind, also an artist, also an eccentric, became friends and would happily exchange audio books. Soon she was hired to help pack up my father’s law firm and the entire house. That year of work cemented her friendship with the Seed and Reyto families. So here’s to Edna Barker: the most authentic person I’ve ever met, a rare individual who lived her life on her own terms right to the end.