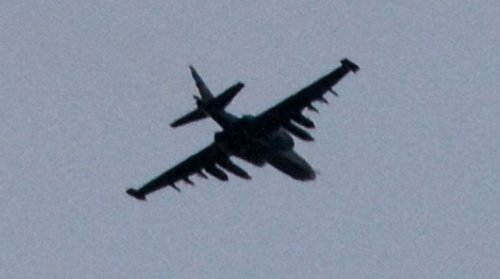 Five years have passed since that memorable day when on June 2, 2014 an attack jet of the Armed Forces of Ukraine struck a blow on the building of the Lugansk regional state administration. It wasn’t the first episode of the use of aviation in the civil war in Donbass. Military jets passed at low heights and broke the sound barrier over the residential quarters of the cities, intimidating the population.

Helicopters gave fire support to the Ukrainian troops during the militia’s first unsuccessful storm of Donetsk airport. But the airstrike on the office building in the city centre in broad daylight was an obvious crossing of the “red line”, therefore its emotional influence was also extremely strong.

This case cannot be attributed to excesses that happen during combat operations. It was not an accidental attack on a civil target or a pilot error. The blow was struck purposefully, and it was a terroristic blow. The task of the pilot was to show to the uprising residents of Donbass that on the territories not controlled by the Kiev authorities there are no forbidden targets and that Kiev will use the entire range of arms available to it against Donbass. Precisely against Donbass, and not against the militia; contra the civilians who Ukraine organized a blockade against, trying to starve the rebellious region; against the children who were promised basements by Poroshenko instead of schools; against pensioners whose social payments were blocked.

Kiev “strategists” used aviation, first of all, as a weapon of terror. But its role in combat operations also should not be understated. It’s not a coincidence that in all the civil conflicts of recent times that erupted with the direct support of the US and collective West, Washington sought to deprive the legitimate government of an opportunity to use aviation. Having lost air superiority, the government sooner or later loses the war. Even the persistently resisting Assad was on the verge of defeat before being saved by the Russian aviation group. Having returned to Syrians power over their sky (under the cover of the Russian Aerospace Forces the Air Force of the Syrian Arab Army also renewed its activity), Russia allowed Damascus to break the course of military operations, having turned defeat into a victory.

If the rebels did not manage to break the resistance of government forces, even deprived of aviation support, then the US and their NATO allies started the air offensive against the government, definitively changing the balance of forces in the conflict. It was like this in Yugoslavia and in Libya, and affairs were leading towards this also in Syria, where the direct aggression of the West was prevented by the deployment of the Aerospace Forces.

The Ukrainian army had a too obvious quantitative and technical superiority over the militia, and the conflict itself has been in a frozen state by the Minsk Agreements for a long time. Thanks to this, the short episode of the participation of the Ukrainian aviation in combat operations is now half-forgotten, and its importance is understated. Nevertheless, it is necessary to note that the first victories of the militia supported by Russian volunteers and the freezing of the conflict became possible only after it was succeeded to clean the sky from the Air Force of the UAF. 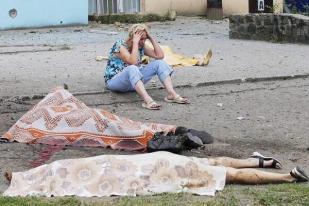 “A Ukrainian Sukhoi, having made several circles over the centere of Lugansk, homed in on a position and somewhere over that place – where now there is a monument bearing the inscription 02.06.14 on Oboronnaya Street – launched a series of missiles at the central square. It cut a clearing in the thickets of the park and launched a missile at the administration building. Eight people remained lying in pools of blood on the sidewalk and on the threshold of the administration… Why was it necessary to carry out an air strike on the centre of a peaceful city? Who had enough cynicism to give the order to launch missiles at a square where children, mothers, and elderly people were walking around? Who didn’t hesitate to squeeze the trigger and fire munitions at live unarmed targets? I have answers to these questions, but they are missing from the decisions of the courts and tribunals,” stated the adviser to the head of the LPR Rodion Miroshnik.

Moreover, at least one attempt was made to neutralise the action of the air defence systems defending the interests of the militia. I mean the joint provocation of Ukraine and the West that destroyed a Malaysian “Boeing” over Donbass and accused the militia, and indirectly Russia too, of doing it. The downing of the “Boeing” became the reason for introducing anti-Russia sanctions, that’s why the direct task that was in the process of being solved but wasn’t solved by the organisers of the provocation disappeared from the focus of public attention. And it consisted of compromising the air defences of the militia, which were undoubtedly organised not without the help of Russia, and to open the skies for Ukrainian combat aviation.

The downing of the “Boeing” happened on July 17th, exactly at the height of the first active phase of the fighting in Donbass, at the critical moment when the destiny of the entire campaign was being decided.

It happened after a series of outstanding successes of the air defences covering the rebels, who shot down about ten warplanes, approximately the same number of helicopters, and the military transport plane transporting a company of paratroopers to the airport of Donetsk. The loss of aviation support predetermined the falling of the Donetsk and Lugansk airports, which for a long time were considered by Kiev as the foundation for the organisation of a storm of the respective cities. While the air bridges still worked, Kiev was able to concentrate at the airports any number of troops and provide them with everything they need for the necessary storm. By the way, it is precisely in this way that the airport of Kramatorsk (which the militia did not manage to capture) was used during the storm of Slavyansk by the UAF. The ability of Kiev to quickly send reinforcements and ammunition depreciated all the tactical successes of the militia at the first stage of the defence. 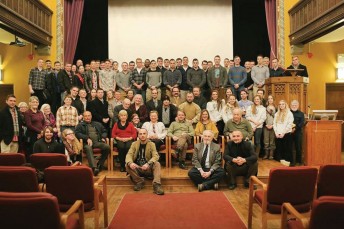 Canadian military celebrates the attack on Lugansk and Donetsk. The film “The Ukrainians/Les Ukrainiens: God’s Volunteer Battalion” glorified the assault by the private fascist Azov battalion on the Donetsk airport in religious colours. It was shown at the Royal Military College in Kingston (pictured at left) on February 22, 2016 as part of a national tour.  A RMC professor described the Azov as a modern version of the Minuteman.

The organisation of the September and August cauldrons would also be impossible if the aerial domination of the Ukrainian aircraft had remained. Control over the skies would paralyze the movement of forces and the artillery supporting the militia. In turn, the Ukrainian troops would not lose contact with the rear.

Thus, the fight for the sky became the most important stage of the fight for Donbass, although it is still understated today. The Ukrainian authorities, the Ukrainian army, and Ukrainian society covered themselves during this stage of civil war with eternal shame. War criminals in suits were giving orders to carry out terroristic strikes on obviously civil targets, war criminals in uniforms executed these orders, and pilots did not hide that they bombed civil objects for money. They knew that it’s not the Motherland that they were defending. They were performing the role of mercenaries in someone else’s dirty game. But an opportunity to earn a bit of extra money suppressed their conscience. But Ukrainian society hypocritically argued about “exploding air conditioners” and laughed at the footage of women who were ripped into pieces, claiming that the army is fighting against “Russian aggression”.

When inhabited massifs are shelled by artillery, the targeting of guns and mortars can be justified by saying that they don’t know what they are hitting. Like saying: the order with a reference to intelligence data arrived, and it is impossible to check who mixed up the coordinates and how. But the pilot of the combat jet perfectly sees whom he uses unguided missiles and bombs against. He cannot refer to “ignorance” to justify himself. Probably, that’s why artillerists are not paid extra for each shell fired in the same way that pilots were paid for each sortie.

Russia in parallel fought against the West in the political and diplomatic field, neutralising its provocations via transparent hints and demonstrations. The last word in this regard also belonged to Moscow and Donbass. When – after the Malaysian “Boeing” was downed, against the background of the anti-Russia hysterics in the western media – Ukrainian aviation made an attempt to return to the skies of Donbass, the militiamen showed an airfield where among several small aircraft there was also one combat jet (according to the official story – they were repairing a downed Ukrainian one), and the Russian media did not exclude that now the militia, which by this moment had already “repaired” several hundreds of tanks, armoured combat vehicles, and artillery systems, can “repair” several tens of combat jets too. Well, and teaching a miner to fly isn’t at all a problem.

The West understood the hint, and the topic of returning the Air Force of the UAF to the skies of Donbass was closed forever. The lives of the passengers and crew of the Malaysian “Boeing” were sacrificed by the western provokers in vain.

But, although the aviation of the UAF left the skies of Donbass, the war criminals on the land remained. During those five years that passed since the memorable airstrike on Lugansk, their quantity only grew. Among them are not only Generals who planned to use the army against their own people and not only mercenary pilots, who were one of the first to start the war. Among them are artillerists, tankmen, infantrymen, paratroopers, “volunteers”, and “helpers”. And now they are being replenished at the expense of the president Zelensky and his team. It’s not them who started this war, but they are continuing it. Like Poroshenko, they did not stop it, and now they bear responsibility for all bloodshed, and not only the blood that is yet to be spilled, but also the blood that already was spilled. Including responsibility for the airstrike on Lugansk on June 2nd 2014.

Rostislav Ishchenko is a well-known journalist and commentator who escaped political persecution in his native Ukraine and now resides in Moscow.