Exactly how bad is the new Calgary Flames arena deal? Neil deMause writes in the Field of Schemes website:

(July 26) – With all of four days of public comment period (expiring today at noon, July 26) allowed before the Calgary city council votes next week on its Flames arena plan, the media have been commenting like crazy on how it’s either terrific or godawful. Among the takes: END_OF_DOCUMENT_TOKEN_TO_BE_REPLACED

Ireland: The re-interment of Peter Barnes and James McCormick

Remembering the Past 50th Anniversary 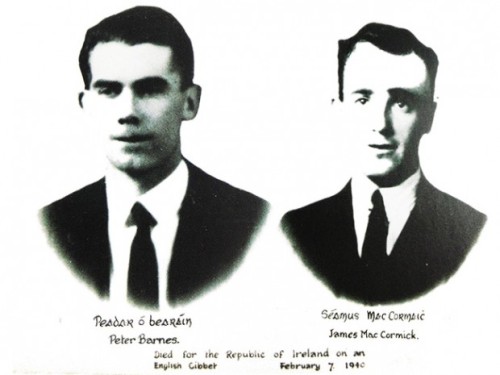 IRISH republicans Peter Barnes and James McCormick were hanged in Winson Green Prison in Birmingham on 7 February 1940. They were buried in the prison ground and plain crosses with only their initials marked the graves. It took nearly 30 years before relatives were allowed to reclaim their bodies. END_OF_DOCUMENT_TOKEN_TO_BE_REPLACED

The latest Calgary stadium swindle (I)

After a closed meeting behind the backs of the people on July 22, the Calgary city council announced an outrageous pay-the-rich deal with the owners of the Calgary Flames of the NHL for a new 19,000-seat arena. It will be built on current Calgary Stampede parking lots to replace the Saddledome. Details include: END_OF_DOCUMENT_TOKEN_TO_BE_REPLACED

Students in a Gaza school. Thomas Koehler / Photothek via G

75,150 students in the Gaza Strip and the West Bank (including Jerusalem) took the Palestinian matriculation exams and 52,108 (69.34 percent) passed. The success rate for the literature track, in which 47,467 students were tested, was 64.1 percent; in the sciences, 19,724 students took the exams and 83.63 percent passed. The results were announced Thursday. In other areas, such as business and entrepreneurship, sharia and vocational tracks, where few students were tested, the pass rate was about 60 percent.

The matriculation is one important area where the institutional split between the Gaza Strip and the West Bank has failed, thank God, and identical exams were administered in both places. END_OF_DOCUMENT_TOKEN_TO_BE_REPLACED

END_OF_DOCUMENT_TOKEN_TO_BE_REPLACED

The Englishman who invented the concentration camp

Demonstrations have broken out on Canada to condemn U.S. racist concentration camps. It was in Canada in 1916 that the city of Berlin, Ontario was renamed Kitchener at the height of racist attacks on residents of German origin and Mennonite faith during the height of the first imperialist world war, a consequence of “top down” “war=driven propaganda.” But who was this Kitchener?

The Irish-born inventor of the concentration camp, Horatio Herbert Kitchener.

There has been heated discussion on the term “concentration camp” since allegations by Democrats that such camps are soon going to start operating with migrant children in southern U.S. border areas. END_OF_DOCUMENT_TOKEN_TO_BE_REPLACED