No to Imperialist gangsterism! End the brutal siege of Venezuela! 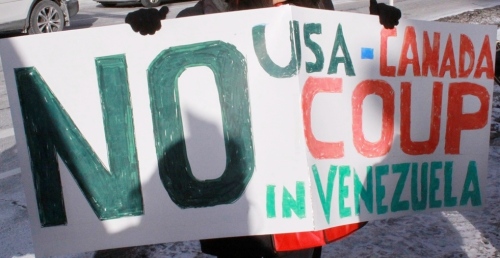 On September 11, at a regular meeting of the Permanent Council of the Organization of American States (OAS) the United States and 10 Latin American countries that are parties to the Inter-American Treaty of Reciprocal Assistance, also known as the Rio Treaty, passed a resolution recommending that it be activated against the Bolivarian Republic of Venezuela, based on Venezuela allegedly representing “a clear threat to peace and security” in the Americas. Five other countries that are also party to the treaty abstained and another was absent.[1] On September 23, at a follow-up meeting of foreign ministers of the member countries held in New York, 15 of them approved activating more sanctions but stopped short of openly calling for the use of force. Uruguay opposed the motion and announced its intention to withdraw from the treaty and Trinidad and Tobago abstaine

The Rio Treaty, a relic of the cold war described as a mutual “defence” pact was imposed on Latin America and the Caribbean in 1947 by the United States as an instrument for “containing communism” in its “backyard.” Like NATO’s Chapter V, it commits state parties to engage in collective defence if any one of them comes under attack, based on the same logic that an attack on any one of us is an attack on all of us. It allows for the authorization of a range of punitive measures of a diplomatic and economic nature through to military force. At the September 11 meeting of the OAS an amendment proposed by three countries to exclude the military option against Venezuela was defeated.

This latest attempt to muster a regional force to intervene against Venezuela and provide it with a veneer of legitimacy was led by the U.S. together with the pro-war government of Colombia that today is engaged in destroying the peace process in its own country as former guerrillas and social leaders are being massacred with impunity almost on a daily basis. There was enthusiastic support for the resolution from the phony parallel “government” and “president” the U.S. and Canada have tried, but failed, to impose on the Venezuelan people, but which has has been illegally accredited to represent Venezuela at the OAS.

The centrepiece of the meeting, called auspiciously for September 11, was a harangue by the Colombian foreign minister who painted his country as the victim, claiming it was under threat of attack because of “illegal Colombian armed groups” and “new narco-terrorist groups” he alleged were being harboured, armed and trained in Venezuelan territory with the support of the Venezuelan government and its armed forces.

Canada was unable to take part in the vote at either the OAS meeting in Washington or the one held in New York on September 23 since it, like a number of other OAS members, is not a party to the Rio Treaty. However Canada and several other countries that make up the so-called Lima Group, put in motion by the U.S. to support its regime change efforts in Venezuela — and in which Canada plays a leading role — were the first to speak in favour of the resolution’s content aimed at opening the way for escalating and providing an air of legality for the criminal siege of Venezuela already underway.

Canada’s representative began his intervention at the OAS by condemning what he called the “illegitimate regime of Nicolás Maduro,” repeating the Colombian foreign minister’s allegations that would soon be shown to have come from an obviously forged document attributed to Venezuela’s Bolivarian Armed Forces, about the government of Venezuela “protecting narco-terrorist and delinquent organizations.” Leaving little doubt about Canada’s support for activation of the Rio Treaty, invoked by the U.S. in the past to lend legitimacy to its invasions of the Dominican Republic, Grenada, Panama, Nicaragua and other countries, the Canadian representative agreed there was “a clear threat to peace and security in the region” from Colombian armed groups allegedly operating freely in Venezuela, and said Canada shared Colombia’s interest in suppressing such organizations.

In its haste to appease the U.S. war government rather than upholding international law and the norms of diplomacy, the Trudeau government has landed knee-deep in a putrid swamp. Hypocritical words from the likes of Chrystia Freeland, ringleader of the Lima Group, who says Canada supports the Venezuelan people and is working for a “peaceful transition” to “democracy” on their behalf are belied by the facts. There is nothing peaceful, democratic or legal about organizing a coup d’état against a government freely elected by its people, and if that does not work, laying siege to the country with coercive measures aimed at starving its people and depriving them of medications to try and force them to stop fighting in defence of their sovereignty and right to be, as the U.S. continues to hold out the prospect of an invasion.

What Canada is participating in is imperialist gangsterism pure and simple. It must not pass!

It is clear that there is an urgent need for a new direction in Canada’s foreign policy — one that does not fly in the face of Canadians’ desire for their country to be a force for peace in the world and to have friendly relations with all peoples instead of meddling in their affairs. Without an independent foreign policy there will be no way for Canada to get out of the swamp it has landed in by appeasing the U.S. imperialists — the main threat historically as well as today to peace and security in the Americas and the world. The need to get Canada out of the U.S. war machine is a topic deserving of serious discussion in the election.

Margaret Villamizar is the MLPC candidate in the riding of Windsor West.