On Saturday January 11, demonstrations took place across Britain to condemn the US acts of war and lawless killings in Iraq. Thousands participated in London and throughout the country including in Bristol, Liverpool, Newcastle, Bradford, Manchester and Chesterfield.

The very notion of international law has been jettisoned as the US, British and other ruling elites routinely resort to force to pursue their international interests. For all the talk about a “rules-based international order”, the might of NATO, foreign troops, covert operations which become ever more overt, is the norm. The targeted and unlawful killing by an unmanned drone runs brazenly contrary to established norms of international conduct. Such a pro-war agenda is not acceptable to the world’s people.

The peoples of Iraq and Iran themselves have never been reconciled to the occupation of their countries by US imperialism, as well as the US’s allies. It appears that the US has no intention of complying with the resolution passed by the Iraqi parliament demanding the departure of all foreign forces. The demonstrations taking place in Britain and throughout the world have built on the stand that such warmongering and lawlessness by the US and other big powers is Not In Our Name! as was the call from 2001 onwards. They are affirming that there is an urgent need for anti-war governments in order that the people can speak in their own name and become a force for peace nationally and internationally.

Britain must withdraw its more than 1,300 personnel from the region, who are deployed in support of Operation Shader, including RAF aircrew and engineers, UK Special Forces and British troops there with the role of training Iraqi forces. The pretext for their presence no longer holds.

The triggering by the “E-3”, Britain, France and Germany, of the “dispute resolution mechanism” of the Joint Comprehensive Plan of Action (JCPOA) is also a provocation against Iran, and must be opposed.

The demand of the anti-war movement is that Britain withdraw from NATO, and dismantle all aggressive military alliances with US imperialism. To have US military bases and personnel in Britain is not acceptable and they must leave. 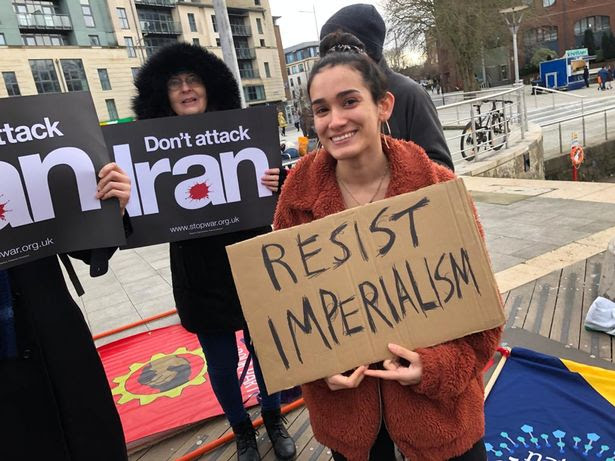 In London, thousands marched through the centre of town from the BBC in Langham Place to a rally in Trafalgar Square. The march was very united and militant, and hundreds of copies of RCPB(ML)’s January 4 statement were distributed en route and in the Square. The rally was addressed by Jeremy Corbyn, and many others also condemned the US and Britain, including Lowkey, Salma Yaqoob, Tez Ilyaz and Lindsey German.

Jeremy Corbyn emphasised: “When big powers act illegally, when people step outside the norms of international law there are consequences. All this does is set off a spiral of violence and danger which will lead us to yet more wars in the future. We need to stand up for international law, for peace and for justice all around the world.”

In Bristol, anti-war protesters gathered with a demand to stop further war and violent conflict in Iran and Iraq. The rally was supported by National Education Union and Bristol Unite.

January 25 has been designated as a Global Day of Protest to condemn targeted assassinations and the threat of war against Iran. 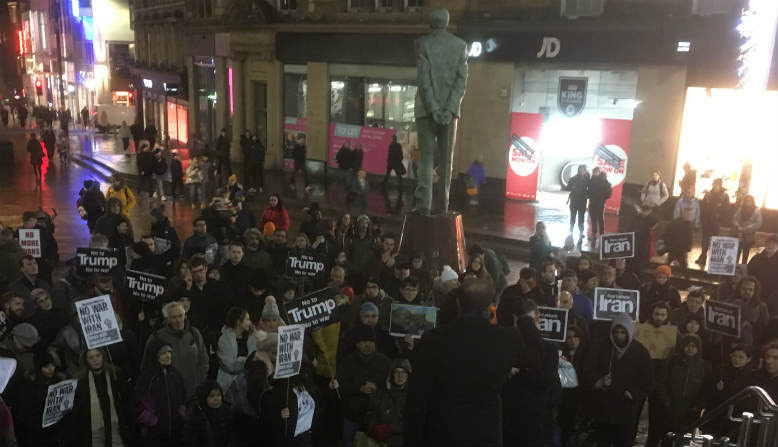 On January 8, the Stop the War Coalition held a packed public meeting in Conway Hall – No War On Iran. This was ahead of the demonstration organised for Saturday, January 11. Chaired by Stop the War Coalition chair Murad Qureshi, a strong platform included Iranian and Iraqi speakers Abby Aadalas and Sami Ramadami, as well as Tariq Ali, Kate Hudson of CND, Lindsey German and rapper Lowkey.

Tariq Ali said that the assassination was a cold calculated act of gangsterism with no holds barred. Speakers then presented informed and incisive assessments of the US intentions in the light of its long-standing drive to destroy Iran as a strong independent power in the region, and of the changing balance as both in Iraq and in Iran the people are uniting against US imperialist policies.

Kate Hudson spoke about the pressure on signatories to pull out of the nuclear deal with Iran. She anticipated the scenario that this would lead to proliferation of nuclear weapons as an excuse to strike Iran. She mentioned Bush and Blair’s so-called “axis of evil” which assisted in the disinformation about weapons of mass destruction. The US terminology now is very reminiscent of the terminology being used prior to 2003. Although the anti-war movement at that time did not stop the invasion of Iraq, it did mean that the US was not able to move against Iran.

The crucial question discussed was what stand peace-loving people should take.

What is needed is solidarity with the people against imperialist aggression, said Sami Ramadami, a long standing Iraqi activist and writer on the Middle East with Stop the War. “Look at Libya – when imperialism wins they destroy a state, and what kind of social progress can be made then?”

Lindsey German, Stop the War Convenor, said that solidarity in Britain means building a movement against our government’s intervention, and for peace.

Lowkey, the rapper and activist, spoke of the rich anti-war tradition in this country from the time of World War I on. “We have to cultivate critical thinking as to what the US and Britain are doing,” he said.