The Amazon deal: Trudeau government’s use of pandemic to serve private interests

On April 3, Prime Minister Trudeau announced that his government had signed an agreement with Amazon Canada to manage the distribution of medical equipment, such as masks, gloves and ventilators that are needed in all the provinces and territories.

Trudeau did not provide any details on the value of the contract but a government news release issued later the same day said that Amazon was providing the service to Canadians at cost, without profit.

Mike Strauch, a manager for Amazon Canada said in the statement, “the Amazon Canada team is proud to partner with the government of Canada by leveraging our fulfillment network and delivery service partners to ship critical supplies to frontline medical professionals across the country.”

This decision is of great concern at this time as it puts the means to meet the needs of Canadians into the hands of a foreign corporation. Premiers and government officials across the country have repeated in recent daily briefings that one of the greatest lessons we have learned so far is to rely on our own resources to produce and deliver the equipment that we need to enable the front line workers to perform their tasks as safely as possible.

In spite of this experience, the Trudeau government has entrusted this work to Amazon, the giant U.S. monopoly that is notorious for creating a precarious situation for its own warehouse workers, ignoring their health and safety and brutally suppressing every attempt of the workers to unionize. 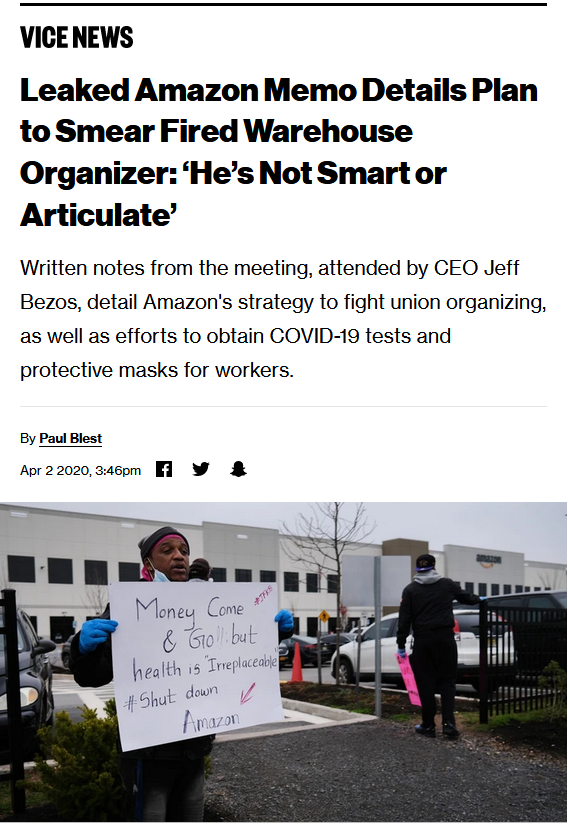 Just last week, Amazon fired a warehouse worker in Staten Island, New York, who led a walkout over concerns that workers could be exposed to coronavirus. Recent reports indicate that the workers at this facility are planning to go on strike on Monday, April 13 to demand that Amazon shut down temporarily for sanitation warehouses where there are confirmed cases of COVID-19 and provide paid sick leave to all workers. Workers at more then 50 Amazon warehouses nationwide have tested positive for COVID-19. The planned walkout on April 13 would be the second time in two weeks that workers were forced to take action to fight for proper working conditions and to defend their health and safety.

This is the multinational corporation that Trudeau is trusting to manage the distribution of crucial equipment needed by frontline workers across the country, one that has shown that its business model is based on making maximum profit by ignoring the rights of the workers. The claim that Amazon will be providing this service at cost, without profit, raises a lot of questions. Everyone knows that Amazon is greatly benefitting from the huge increase in online orders and all its warehouses and distribution centres are operating at maximum capacity so Mr. Trudeau’s claim that Amazon will not profit is ludicrous at best.

Canada Post has the largest distribution network in Canada with delivery capabilities in every city, large and small. Postal workers have all the experience and know-how to carry out this task, quickly and efficiently.

This is not a secret. For all elections, federal or provincial, postal workers are organized as teams to work onsite in Elections Canada warehouses and dispatch millions of packages, consisting of everything needed to establish infrastructure in every riding and every returning office in Canada. That means computers, office equipment, manuals and all the documentation needed to run the election. Postal workers have performed this work election after election which has greatly facilitated the work of Elections Canada.

Postal workers have also been organized into off-site teams to work at the Department of Supply and Services’ printing plant for the nationwide distribution of Canada Pension cheques and GST returns. This sortation of mail for distribution all across Canada is also performed onsite at Revenue Canada offices around taxation time.

This massive productive force is available to serve Canadian society but the ruling elite is intent on destroying the post office by privatizing and deregulating it to enable private interests to enrich themselves on the profitable parts of the Postal Service. By putting Amazon in charge of this work that is so crucial for the national interest, the Trudeau government has inadvertently revealed that it intends to destroy any part of the productive forces that it cannot control.

Prime Minister Trudeau continues to pay lip service to the importance of unity of all Canadians and how we are all in this together but his actions are clear evidence that the government does not have the interest of workers and all Canadians at heart. Faced with this pandemic it cannot be trusted to make the important decisions needed now which favour the vast majority of Canadians.