Since an assailant opened fire on the embassy during the dawn hours April 30, several versions of the events and the suspect’s motives began to circulate in the media | Prensa Latina interview with José Ramón Cabañas

The attack on Cuba’s embassy in Washington, April 30, shocked many in the two countries and abroad who immediately condemned the event and expressed solidarity with the island.

Since the individual opened fire on the building during the dawn hours, several versions of what happened and the assailant’s motives began to circulate on the social media and some U.S. press.

Likewise, many who condemned the assault recalled the history of aggression against Cuba’s representatives abroad and, linking the event with the hostile rhetoric used by the current U.S. administration when referring to the island.

Prensa Latina conducted an online interview with Cuban ambassador to the United States, José Ramón Cabañas, to verify details of what happened at the embassy.

Can you tell us exactly how the events took place in the early morning hours on April 30?

At 2:05 a.m. a vehicle arrived and parked right in front of the embassy, where parking is prohibited. An individual approached the entrance gate holding a Cuban flag in his hand and threw the flag against the gate, yelling phrases that we could not hear. He later returned to the vehicle and took an AK-47.

He started shooting toward the façade of the embassy and when he had emptied about half of the magazine, he changed position and continued shooting toward the embassy´s lobby. When he run out of ammunition, he threw the rifle against the entrance gate of the exterior fence, returned to the vehicle, took an American flag that he wrapped around his shoulders and started yelling phrases and gesticulating while standing in the middle of 16th St., that is a five lane street. He continued to do so until the police arrived around 2:10 am and subdued him without resistance.

But what you are telling us does not match the police report that was made public. How is it that you provide these details with such precision?

In situations like this the preliminary written reports can have inaccuracies. What is indeed regrettable is that they are leaked while still containing such inaccuracies. We have, besides the testimony of our co-workers, video from the surveillance cameras that we shared with the secret service. In this video you can see clearly the offense against our national symbol and the satisfaction of the individual in holding the American flag while he was yelling.

How did Embassy staff react? Did you call the police? 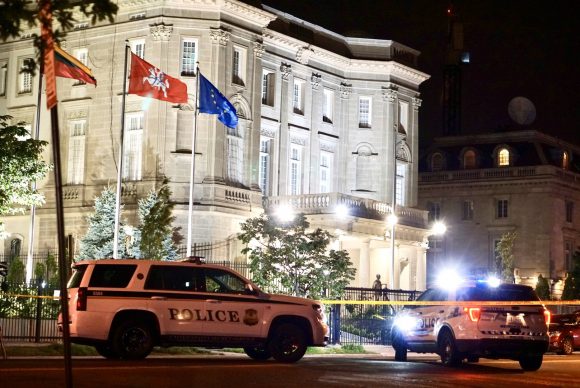 Every Cuban embassy abroad has a protocol to implement in such cases, precisely because of the history of aggressions that we have faced in these 60 years. The protocol foresees not only calling those who must intervene in the situation, but also security measures for the staff.

We were informed immediately and a small group of officials came to the embassy from our places of residence. The police had already closed the block and we had to enter the embassy on foot.

We learned later that calls had been made from neighbouring embassies and neighbors and also that mechanisms that the city has to warn against shots fired in open spaces had worked. As we have said previously, the Metropolitan Police and Secret Service acted professionally from the very beginning.

How did you find the staff members who were inside the embassy? What were your first thoughts when you arrived?

The personnel in charge of security was calm as always. They are professionals and are trained for this. They immediately informed us of the details of what happened and measures taken.

Our first thoughts were about the comrades who have fallen in similar situations in the past. The pictures of Félix García, Adriana Corcho, Efrén Monteagudo, Jesús Cejas, Crescencio Galañena and many others came to our mind, but we came back to reality to reach out to all our staff and check on their condition.

We spoke with our superiors in Havana and informed them. We were worried because our families had first learned about the event from a distorted version on social media. We began to assess the internal damage, since roughly 10 bullets had gone through the glass and into the lobby in several directions.

In addition to the police officers assisted with the incident, did any other U.S. federal agency contact you at the time or later?

We called the Department of State and then again at dawn. When we called the first time they did not know about the events and in the second call they promised that they would get themselves up to date on the situation and provide us with details of the information they would gather; this has not happened, more than 96 hours (four days) after the event.

Likewise, we released two diplomatic notes, one in Havana and the other in Washington, to which we have received no response.

Neither the State Department or the Secretary of State, Mike Pompeo, have formally and publicly condemned the event. However, when referring to Cuba a day after the aggression, the Secretary spoke against the Cuban medical brigades that today provide assistance to dozens of countries in the world.

It is this rhetoric full of hostility, as explained by our Foreign Minister that has been privileged by the current administration and promotes actions that are so reprehensible.

How was the rest of April 30 for you?

On the one hand, we were attending the access requests of the Secret Service and on the other hand, were responding to requests for information from Havana.

The experts spent a great deal of time working in the exterior of the embassy, the garden, the façade, the gate and finally the lobby. They finally left at noon. We consider that they gathered enough information on what happened.

After that, we devoted time to several internal tasks with our staff.

On May 1, you saw the photographs. Our staff is always calm, disciplined and firm. All Cubans have access to a good education, particularly in history. We understand the meaning of what took place and what it meant for our people in Cuba that are always watching every detail.

What reactions have you noted from people who have relations with you in Washington, Cuban Americans, and other diplomats?

From early morning we started getting messages and expressions of solidarity and indignation. Many people do not understand how a citizen can drive for kilometers on a highway with an assault rifle and ammunition, stop in the heart of Washington, D.C. and open fire against an embassy.

We are located on 16th St. that ends at the White House, only two miles away from here. We are next to two other embassies (Poland and Lithuania), only a few metres from the cultural centres of Mexico and Spain. We are surrounded by apartment buildings.

I can tell you that the diplomatic community, specially the Latin American and Caribbean diplomatic community has followed up on this event seriously concerned. We have received calls from Cubans from all over, from people who are regular relations of our embassy, who visit our consulate. They simply cannot understand.

Reports from the police discussed by the press include the identity of the individual, his alleged motives, etc. What can you say about this?

First, these leaks are regrettable, not even the officers who have worked the case can explain this. We do not know who did this, nor their objective, but obviously it is not to support the investigation.

Officially, we do not have details about the identity of the assailant; that is why we cannot comment.

It appears that someone is trying to shape media opinion even before the information is known officially. In the United States not all information is leaked, only what high-ranking officials want to be leaked. I can say now that there is no reason that can justify such an aggression, which is by nature an act of terrorism.

There has been talk about the alleged mental condition of the individual and some people begin to assimilate it as the content of a television series. But it is hard to imagine that a mentally disturbed person could have access to a driver’s license easily, or the ability faculties to drive and find a point on a map, own and use an assault weapon and then not be so disturbed as to not resist the police. An allegedly disturbed person who seems to also know how to operate on social media very well.

Minister Bruno Rodríguez in his remarks to the press that same day, said that certain individuals can feel driven to execute such acts within the context of aggressive anti-Cuban rhetoric. What is your opinion about that?

History is witness to that. If you take the date of occurrence of similar events in the past and compare it with the state of the bilateral relations at that moment, you will find that attacks against our embassies and staff took place precisely when the attitude of the United States was most hostile toward Cuba.

The assailants are not only politically driven, they also feel that the moment is opportune and that they can have certain immunity.

When you see every day, absolutely every day, high-level officials of the U.S. government attacking Cuba, reinforcing the blockade, even as we are all battling COVID-19 and the U.S. officials gruesomely and immorally attack our brigades and medical doctors, well, this verbal terrorism only lacked armed terrorism and it happened.

What was the impression of staff members when they saw the bust of José Martí damaged as well as the façade of the embassy? 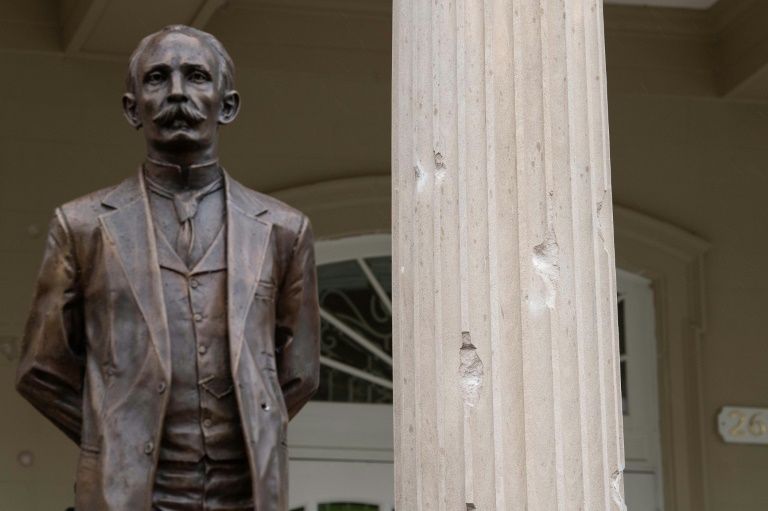 Statue of Jose Marti: Damage done in terrorist attack on the embassy of the Republic of Cuba to the United States in Washington, DC, April 30, 2020.

The statue of our Martí is a precious work by maestro José Villa, cast by expert Lázaro Vázquez. We officially installed it July 1 and the event was a sort of party for Cuban Americans who live in the area and for many friends. Martí is and should be sacred to all Cubans, regardless of his/her place of residence or political affiliation.

The flagpole was hit, one of the few flags that remains at half-staff, as a sign of respect for the victims of COVID-19 in the United States and the world.

As for the façade, the entrance door and the columns, as many remember, hard work was done to recover this beautiful building that was a 100 years old in 2019, and we celebrated the occasion with a reception.

The Cuban state invested significant resources for that purpose, which the city of Washington, D.C. appreciated, because we are all part of a historically valuable district.

Those who attended the re-opening of the embassy July 20, 2015, were able to appreciate the spectacular building, as were those who have visited since then. In short, many of our symbols were attacked. Is there someone out there thinking of destroying them? The answer is: they will not be able to do so.

Statement by the Minister of Foreign Affairs of the Republic of Cuba, Bruno Rodríguez Parrilla

One response to “What happened in Washington? – Jose Ramon Cabañas, Cuban ambassador”