A year has passed since Vladimir Zelensky became president of Ukraine. Twelve months ago, three quarters of the country’s electorate voted for him; optimistically, they associated him with being able to reboot the country’s political power. Voting for Zelensky was essentially a protest vote. People were casting their votes against the nationalist Maidan government and the main requirement was to hold to account corrupt officials and war criminals from the coterie of ex-president Petro Poroshenko. The focus of Zelensky’s campaign was a promise to hold them responsible. “I am your sentence,” the young actor boldly declared to the ex-president.

A year later, it turns out that these were just empty words. The policy of Ukraine moves in the same vector, the civil war continues, and corrupt officials from the coterie of the ex-president are still free. In the courts, dozens of criminal cases against Poroshenko have been suspended; Ukraine’s lawyers say[1] that the authorities are basically scared of investigating them. Meanwhile, both the main political parties – that of Zelensky and Poroshenko – unanimously vote in favour of all the IMF’s demands, including the privatization of land.

Just twelve months ago, Vladimir Zelensky criticized the ex-president for a meaningless ban on Russian social networks and online services. He rightly argued that to block them is pointless, as Ukrainians bypass the blocks by using a VPN. Yet, on May 15 this year, the new president signs[2]the paperwork for the blocks’ continuation.

A year of reneging ,U turns and a mirror on the past

As to the conflict in the Donbass, Zelensky’s position has shifted over the year to mirror that of Poroshenko. If last year he had argued that in the Donbass it was enough just to stop shooting, now he’s demanding to initiate a transfer of control to Kiev of the border with the republic of Donbass and the Russian Federation (that is, to impose a siege on the Donbass republics).

As Maryna Bardina, one of his party deputies from the Servant of the People party, had recognized on May 17, Zelensky continues to stand with Poroshenko on the matter when she admitted. “Zelensky tried to move along the path that was before, but the strategy, developed by the fifth president Poroshenko, did not work for six years.”[3]

When he was a candidate, Zelensky promised not to conduct any backstage negotiations with the oligarchs. “No more backstage talks, night visits to the President’s Office and no agreements hidden from the public,” Zelensky had said during the election campaign. Since then, he has met more than once in his office with all the Ukrainian oligarchs: Igor Kolomoisky, Rinat Akhmetov, Victor Pinchuk and Valery Khoroshkovsky[4].

The similarity between the two presidents’ politics, men who had just a year previously vehemently opposed each other, is due to Ukraine’s dependence on other forces. Any other president would be forced to continue this policy too, fearing, on the one hand, the armed gangs of far-right nationalists, and on the other hand, the US embassy, ​​which dictates the politics of modern Ukraine, regardless of the president’s character and politics. In other words, the course of Ukrainian politics no longer depends on the country’s voters or elected authorities.

One billion US dollars for servility 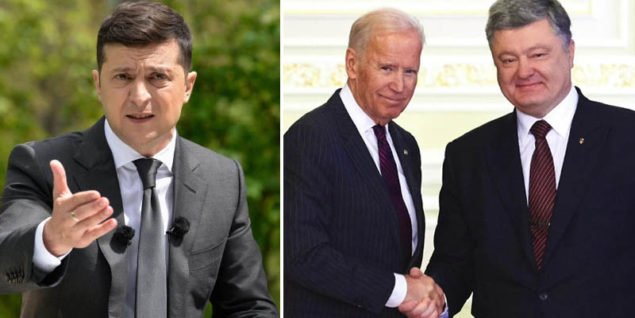 A vivid confirmation of this was the leaked conversations between ex-president Poroshenko and Joe Biden, published on May 19, 2020 by Ukrainian deputy Andrei Derkach[5]. The leaks have shown the full degree of Kiev’s dependence on a pointer from Washington, as well as the servility of the Ukrainian authorities: “The first topic is the one billion US dollars, American taxpayers’ money, given in exchange for maintaining Burisma schemes and international corruption … The talks took place at the end of 2015 and throughout 2016,” said Derkach at a press conference in Kiev.

“One billion of US taxpayers’ money. That’s the price of saving Biden from prison. It’s for the sake of one billion that Pyotr Poroshenko fired Viktor Shokin, the Prosecutor General, who had been investigating the Burisma case and eventually found traces of Biden … Three out of five factions in parliament are controlled by Biden. The Cabinet – fully. The largest state-owned enterprise – Neftegaz, Ukrzaliznytsia, Ukrposhta, OschadBank and Ukroboronprom – were surrounded by the Supervisory Councils that in reality consisted of foreign agents. Their salaries are in the millions and their bonuses come from the public purse: the money of the Ukrainian people. Parliament, the Cabinet, the Prosecutor General and the National Anticorruption Bureau, each a state-owned enterprise – all of that Poroshenko swapped for the right to spend that one billion dollars on his private companies,” added the deputy[6].

The fate of General Viktor Shokin

Derkach claims that the then president of Ukraine, Poroshenko, had wanted to personally discuss the fate of ex-Prosecutor General Viktor Shokin with the vice president of the United States, as Shokin had got too close to exposing the schemes of Biden and the gas company Burisma Holdings. Biden flew to Kiev and offered Poroshenko one billion dollars in loan guarantees for him to fire Shokin.

Poroshenko directed this billion to the defense industry – his own private factories: Leninska Kuznya, the company Bogdan and the state-owned company Ukroboronprom, and the profits went into the pockets of Poroshenko and the former first deputy secretary of the National Security and Defense Council (NSDC), Oleg Gladkovsky.

Also, according to the deputy, Poroshenko blocked the appointment of a new government and planned to buy up votes so that the United States could influence decisions in the Ukrainian parliament.

Earlier, in December 2015, John Kerry, the former head of the US Department of State, spoke with Poroshenko. He suggested that Poroshenko “consider the possibility” of replacing the head of the Prosecutor General’s office, Viktor Shokin, who, as the American politician noted, “blocked the purification reform” of the department. At the same time, Kerry referred to the concerns of then Vice President Joe Biden. Biden was the second with whom Poroshenko spoke. Conversations with him took place in 2016.

“In the event of your having a new government and a new Attorney General, I will be ready to publicly sign obligations for one billion [US] dollars,” Biden said during the conversation.

Poroshenko called this ‘a very strong motivation’ and added that one of the candidates for the post of head of the GPU is Yuriy Lutsenko. “If you think that a politically motivated person is not quite suitable, from your point of view, I withdraw my proposal. Nobody knows that I will offer Lutsenko,” said Poroshenko to Biden.

At the same time, he also assured Biden that he had blocked the resignation of the government of Arseniy Yatsenyuk and admitted that he did not have a majority in parliament after the departure of two political forces from the ruling coalition.

In another conversation, Poroshenko asked the Americans to increase pressure on the Samopomich party in order to make Natalie Yaresko, the Prime Minister of Ukraine, who was a US citizen. 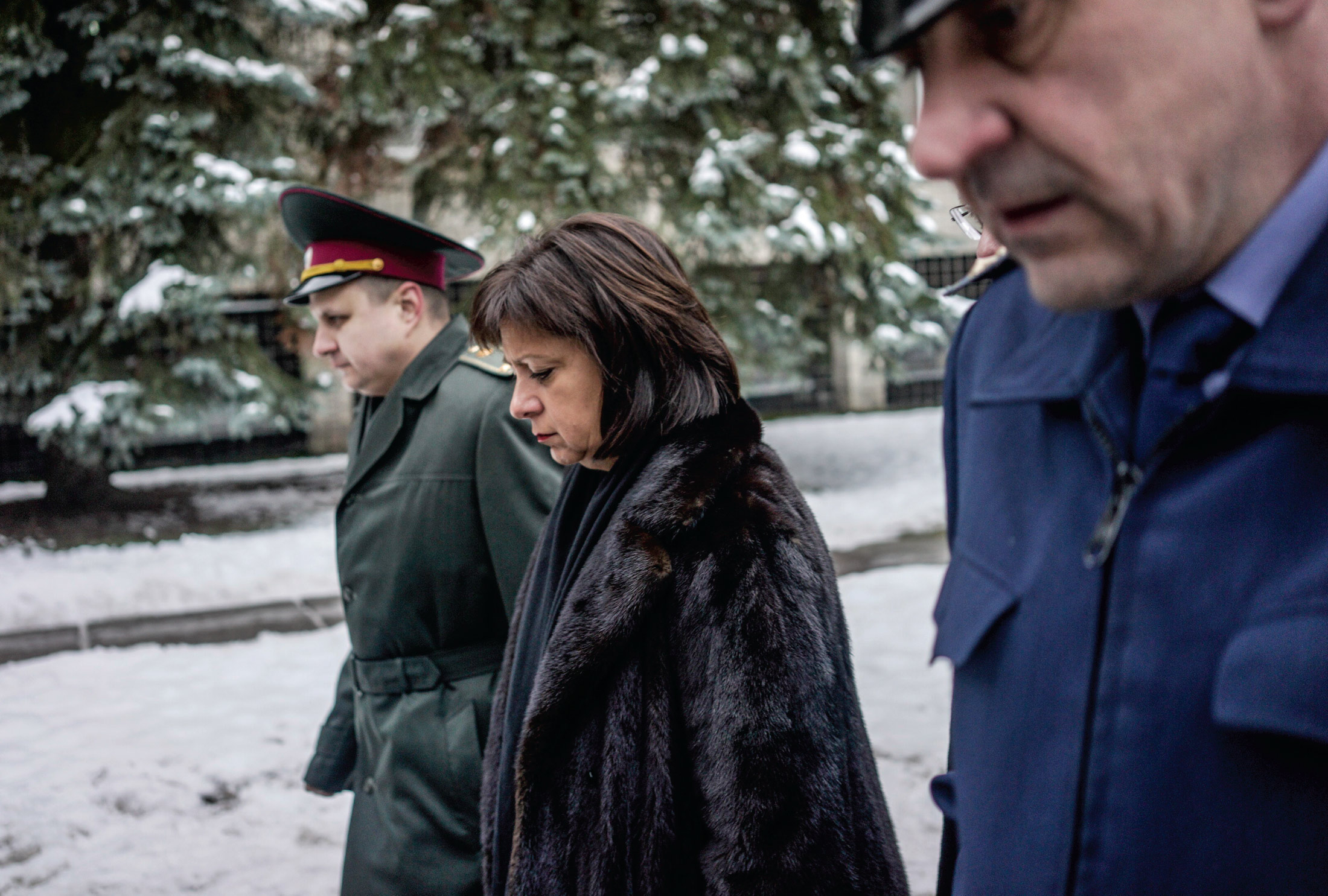 Jaresko in 2015. On 20 March 2017, the US appointed her executive director of the Financial Oversight Board of Puerto Rico, as part of the PROMESA bill. She makes $625,000 a year, and her traveling, moving and security costs were covered | Guy Martin, Bloomberg

An institution of ‘curators’

“My key priority was to avoid early parliamentary elections. The new coalition should be pro-European and aimed at carrying out reforms. The party, Samopomich, received my proposal regarding the technocratic government of Yaresko and joining the coalition, because the reason for the political crisis is that the three factions left the coalition, and together with the Prime Minister we ended up a minority,” complained Poroshenko.

And, during another conversation, in May 2016, Poroshenko bluntly told Biden that he had asked the US ambassador to Ukraine, Jeffrey Payette, not to give American grants to the Samopomich party. From the Poroshenko-Biden talks, the existence of the institution of ‘curators’ from the United States in key departments of the country; for example, the Prosecutor General’s Office, becomes apparent. It is also interesting that Joe Biden personally oversaw the issue of raising utility prices for Ukrainians. And Poroshenko joyfully reported that he even overfulfilled this plan, raising tariffs not by 75 per cent, but by 100 per cent. “We raised the tariffs by 100 per cent, in spite of the fact that the IMF expected only 75 per cent. We launched the reform of state enterprises. We launched a drug price reform” he announced.

According to the Ukraine media[7], the very tone of the Ukrainian president on the talks was extremely servile and each communication with Biden was more like the report of a subordinate to superior authorities.

“As we see from the conversation, US citizen Joe Biden controls half of the Ukraine parliament, three of the five coalition parties. A very shameful story. Please do not give money to the Samopomich party, asks the independent president of an independent state,” said deputy Derkach, who concludes[8], “Biden ruled Ukraine, and Poroshenko controlled his billions.”

However, as was shown last year, the new president is just as dependent on the United States and IMF requirements. President Zelensky’s overt weakness and indecision has already led to regional officials ceasing to reckon with him, allowing themselves to direct insults at the president and even threats. In the regions of Ukraine, local authorities began to ignore instructions from Kiev. Andrei Golovachev, a political expert on Ukraine, sees this as a tendency to form various semi-independent gang clans in different parts of the country.

“Zelensky has turned out to be a very weak president and under his rule there has begun a spontaneous process of the flow of power from the center to the regions. And this is very good. This is very good, because with such a level of centralization of power, as now, the regions simply do not have a chance for development. It is bad, however, that the process of spontaneous decentralization leads to the fact that in the regions a feudal type of power begins to form, and even with elements of gangsterism and the mafia. This is also a consequence of Zelensky’s complete weakness,” writes Golovachev[9].

During quarantine these tendencies have intensified many times, as local authorities in Ukraine’s regions have begun to see that the president was still only an actor and his abilities did not extend beyond empty words, promises and video messages.