Military reports on seniors’ homes in Ontario and Quebec: A clumsy attempt to find a role for the military in civilian affairs

“It is all about systematically introducing the military to play a larger and larger role in civilian life. All the while governments continue to refuse to permit the unions and civil society organizations to play the role that belongs to them by right” | TONY SEED*

Following the release of the report by the Canadian Armed Forces on the conditions in long-term care homes in Ontario this week, CBC defence reporter Murray Brewster, who used to be embedded in Afghanistan by the Department of National Defence, wrote on May 27: “Sending soldiers to long-term care homes seemed like a strange idea – until they told us what they saw there.”[1]

He writes, “The focused yet compassionate perspective of soldiers in the face of inhumane conditions was precisely the tool needed to rip the lid off conditions in some long-term care homes…” He carefully quotes the daughter of a victim to say this, and even goes so far as to use her to blame the entire debacle of the ruling elites’ deliberate policy of  permitting the privatization of health care and long-term care on ordinary Canadians – who have been shouting themselves hoarse about the criminal conditions in both the health system and long-term care homes – for not speaking out. [2]

“We read newspaper reports. We hear reports. The media sometimes has exposés, and we think, ‘Oh, that’s terrible,’ and then we all go into our little bubbles, and I think we’re all guilty of that,” Brewster quotes Sylvia Lyon, lead plaintiff in a class action suit following the death of her 80-year-old mother, a resident of the Orchard Villa long-term care home in Pickering, Ont.

The lawsuit was filed at the Ontario Superior Court the day before on May 26 against Southbridge Care Homes and its 308-bed Orchard Villa home, where the novel coronavirus had infected at least 96 staff and 225 residents and killed at least 77 people.

“Am I angry? I’m angry at myself. I’m angry at all of us. I’m angry at the fickleness of human beings [who] do not focus on issues and that we wait for a crisis to happen. I think we all have ourselves to blame as well, and that is a very, very bitter pill to swallow,” says the daughter.

Ms Lyon is the sole person interviewed by Brewster. 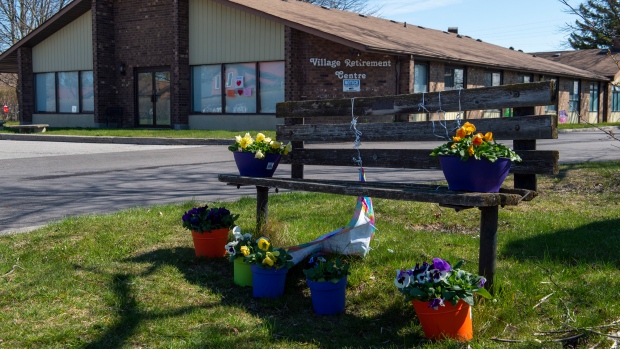 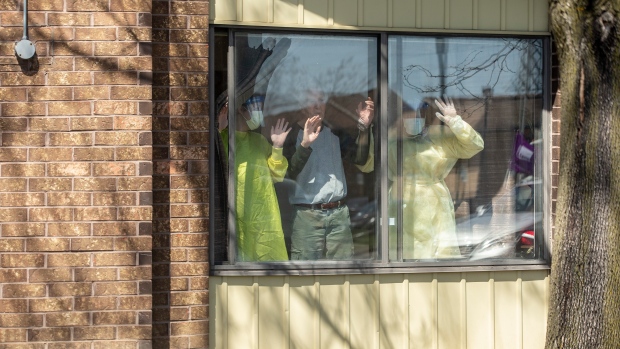 The truth is unfortunately more sinister than Brewster’s rendition. It is all about systematically introducing the military to play a larger and larger role in civilian life. All the while governments continue to refuse to permit the unions and civil society organizations to play the role that belongs to them by right. All political parties banded together to make sure the voice of the people has no expression because these parties are part of the mafia cartel that justifies imposing the neo-liberal agenda on society. This is what has caused this debacle in the first place.

“It is also about getting ‘civilians’ and ‘civilian life’ to conciliate with and support the warmongering of the Trudeau government on the side of U.S. imperialist aims for world domination, under the hoax of our ‘togetherness’.”

It is also about getting “civilians” and “civilian life” to conciliate with and support the warmongering of the Trudeau government on the side of U.S. imperialist aims for world domination, under the hoax of our “togetherness.” Prime Minister Justin Trudeau said it openly when he declared on April 29, “As we watch the Snowbirds fly over our homes, let’s remember that we are all in this together.” It is an attempt to disinform the people so that we are deprived of an outlook on the basis of which we can build the country anew in all aspects of life for the well-being of all.

Prime Minister Trudeau issued the following statement on April 30, after six military personnel aboard the HMCS Fredericton needlessly lost their lives in a helicopter crash on a NATO war exercise in the Ionian Sea, code-named Operation Reassurance:

“[…] I spoke to NATO Secretary General [Jens] Stoltenberg earlier this morning, who offers support and assistance in the times to come. In the coming days, there will be many questions about how this tragedy occurred. And I can assure you we will get answers in due course.

“In a season of grief, a time of hardship, heartbreak and loss for so many Canadians, the men and women of the Canadian Armed Forces stand tall. Bearing the maple leaf on their shoulders, they are known around the world as beacons of civility, compassion and courage.

“Whether combating terrorism, standing by our partners and allies or supporting peace operations around the world, they do what they always do: step towards danger so the rest of us can stay safe.

“Operation Reassurance is Canada at its best, bolstering security and stability in Central and Eastern Europe.”

Four days later the Trudeau Liberals launched his “answer in due course”: Operation Inspiration, the cross-Canada aerial tour of the Snowbirds which ended in a fatal tragedy in Kamloops, BC on May 16. That exercise was a NORAD/Northern Command initiative, in concert with Operation Strong America in the United States.

Trudeau like Trump repeatedly refers to the pandemic as a “war.” Along with promoting NATO as an instrument of peace, he took pride in making the army available to the Premiers of Ontario and Quebec and Indigenous communities, and equated military personnel with doctors and health care workers as heroes.

The military report on conditions in long-term care facilities in Ontario was written by a high-ranking brigadier-general. From Trudeau’s “beacons of civility, compassion and courage” to the CBC’s “The focused yet compassionate perspective of soldiers in the face of inhumane conditions was precisely the tool needed to rip the lid off conditions in some long-term care homes…” – what the Armed Forces calls “strategic communications” and Trudeau calls providing military “aid to the civil power” – is evident for all to see.

In my opinion, the aim of the $240 million military deployment, code-named “Operation Laser,” is not about providing “good Samaritans.” It is to enable Canada, Quebec and Ontario to eliminate any role of the people and their organizations in health care – whose contracts were arbitrarily suspended by the emergency laws – to unite to deal with and solve such a horrific problem on the basis of securing their rights and the rights of all. It was a neo-colonial intervention in humanitarian guise to deny the hereditary rights of the Indigenous communities at a time of the upsurge in their resistance, and specifically right when they were reaching out to Cuba for medical assistance. It is neither a “strange idea” nor will it succeed.

1. “Why it took an outside-the-box use of the military to rip the lid off Canada’s long-term care crisis,” Murray Brewster, CBC, May 27, 2020. Brewster is author, The Savage War: The Untold Battles of Afghanistan, Wiley, 2011.

A similar report is “Canada’s soldiers have provided a wake-up call for our long-term care system,” Samir Sinha and Michael Nicin, Globe and Mail, May 28, 2020.

*Tony Seed is an award-winning journalist formerly with the Toronto Globe and Mail and Shunpiking magazine in Nova Scotia, of which he was editor and publisher.

One response to “Military reports on seniors’ homes in Ontario and Quebec: A clumsy attempt to find a role for the military in civilian affairs”