Washington, DC protest against the killing of George Floyd, May 30, 2020.

For twelve days, hundreds of thousands of people have burst out in militant protests in more than 140 cities across the United States against police brutality, impunity, racism and injustice. They mourn the death of George Floyd killed in cold blood by police in Minneapolis, Minnesota on May 25.

Solidarity protests with tens of thousands of people have also taken place worldwide. 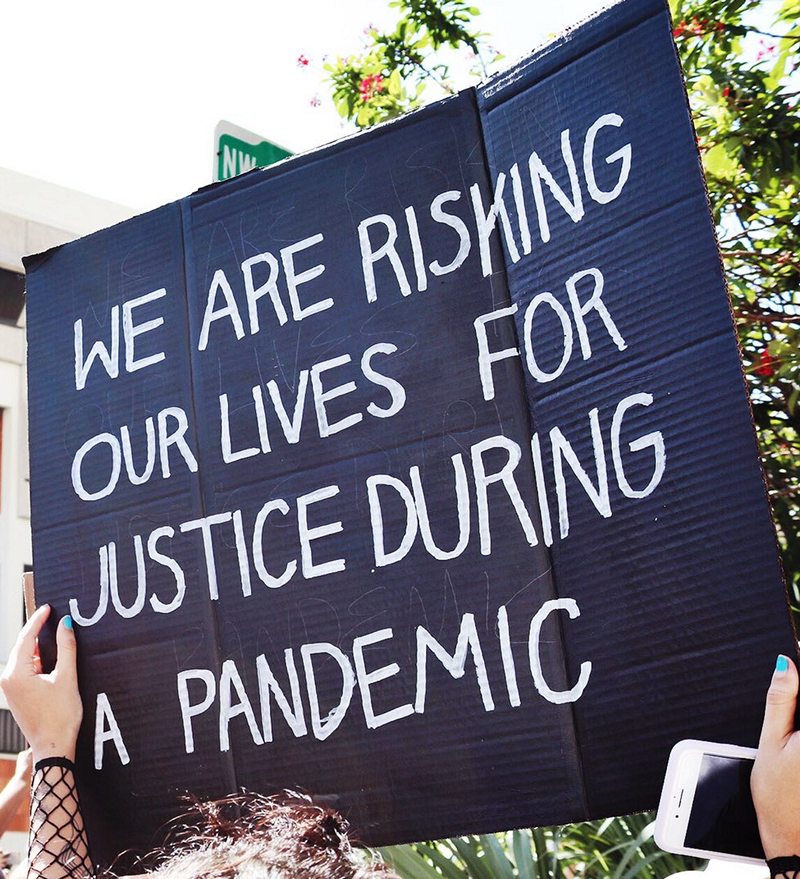 Floyd was 46 years old. He had a family. He lost his life after being arrested on “suspicion of passing a counterfeit $20 bill.” Over the course of nearly 8 minutes and 46 second, a 19-year veteran officer of the Minneapolis Police Department (MPD), Derek Chauvin, knelt on Floyd’s neck while he lay on the ground. Reports indicate that knee on neck is authorized police procedure. Three other officers were also present and involved in immobilizing Floyd while he gasped “I can’t breathe” for several minutes and then became unresponsive. None of the MPD officers attempted to revive him. Chauvin kept his knee on Floyd’s neck even as emergency medical technicians attempted to treat him. All of this was filmed by passers-by, who the police prevented from intervening. Two separate autopsies have determined Floyd’s killing to be a homicide.

Protesters in Minneapolis and across the country, along with civil rights, social justice, anti-war and labour organizations, immediately made clear that the officers must be fired and charged with murder for Floyd’s killing; putting them on paid suspension or other typical slap-on-the wrist measures for police wrong-doing would not suffice. On May 26, all four MPD officers were fired. As protests grew in size and breadth across the country, on May 29, charges of third-degree murder and second-degree manslaughter were filed against former MPD officer Chauvin. On June 3, after days of sustained mass protests that could not be quelled by curfews, the police or the National Guard, Chauvin’s charges were amended to include second-degree murder, while the other three former officers were charged with aiding and abetting second-degree murder. The more profound demands for police accountability and an end to all racist police violence against African Americans remain on the agenda.

George Floyd’s brutal and unjust killing at the hands of the police came not long after two other recent outrageous killings of African Americans in the name of law and order.

On March 13, Breonna Taylor, a 26-year-old African-American woman, was killed in a raid on her home in Louisville, Kentucky by police who allegedly failed to identify themselves after bursting into her home in the middle of the night using a “no-knock warrant” based on spurious information.

On February 23, Ahmaud Marquez Arbery, a 25-year-old African-American man, was killed while out jogging near his home in Glynn County, Georgia. His killing was apparently an act of vigilantism by a former police officer and his son, trying to find a culprit for thefts in the area. Arbery’s killers were finally charged with felony murder 74 days later on May 4, only after a video of the killing came to light.

These injustices against African Americans by the failed U.S. state and its police agencies bring to mind the events of six years ago and the popularization of the slogan “Black Lives Matter,” with the police killing of two African-American men. The first was 43-year-old Eric Garner in July 2014, who, like George Floyd, died gasping the words “I can’t breathe” while police pinned him to the ground. The second was 18-year-old Michael Brown, shot by police in Ferguson, Missouri in August 2014.

Many other unjust killings of African Americans at the hands of police have taken place in the intervening six years.

Twenty-eight years ago four Los Angeles policemen  – three of them white  – were acquitted of the savage beating of Rodney King. Caught on camera by a bystander, graphic video of the attack was broadcast into homes across the United States and the world. Los Angeles Police Department officers kicked him viciously, repeatedly and beat him with batons for a reported 15 minutes. The video showed that more than a dozen cops stood by, watching and commenting on the beating. Fury over the acquittal resulted in five days of rioting in Los Angeles and ignited the national movement against racial and economic disparity and police use of force.

The escalating state violence, lawlessness and impunity are features of the U.S. failed state, which is unable to resolve any crisis, whether it be the COVID-19 pandemic, the racist treatment of African Americans, Indigenous peoples, minorities, migrants or refugees, or any issue facing working people. This is paralleled by the lawlessness and use of force on which U.S. foreign relations are based. This was amply demonstrated by U.S. President Donald Trump himself, who, as the people put further weight behind their demands, acted to inflame the situation by sowing divisions and giving licence to police forces to commit further crimes in the name of law and order.

On June 1, Trump emerged after having taken shelter in a White House bunker to hold a press conference in the Rose Garden. He spoke of the killing of George Floyd as if it was an isolated case, and claimed that his “administration is fully committed that for George and his family, justice will be served,” never mind that similar crimes by the police were unfolding around the White House and across the country at that very moment. In the face of unprovoked police attacks and the acts of agents provocateurs carrying out vandalism and random violence  – the shopworn modus operandi of the state security agencies to undermine the people’s movement and their demands  – Trump claimed that “our nation has been gripped by professional anarchists, violent mobs, or, arsonists, looters, criminals, rider rioters, Antifa and others.”

With this strawman of “professional protestors” in place, Trump sought to equate the people’s mass collective acts of empowerment and defence of their rights  – especially African Americans’ right to live in dignity and security  – with terrorism, to justify the use of more state violence, exceptional measures and arbitrary powers against the people and progressive forces. “These are not acts of peaceful protest,” he claimed. “These are acts of domestic terror.” He then went on say that all federal resources, “civilian and military,” would be mobilized to quell the protests. Trump concluded his speech claiming that his administration is the defender of the rule of law and unifier of the people.

From the Rose Garden he went to “pay [his] respects to a very, very special place.” This was a staged photo op, where Trump clutched a bible upside down in front of St. John’s Episcopal Church.

On June 2, President Trump and the First Lady visited a Washington, DC shrine erected in honour of Pope John Paul II, for another photo op.

The opportunism of both incidents amidst the mass protests was criticized by leaders of each denomination. Mariann Edgar Budde, Bishop of the Episcopal Diocese of Washington, in a Washington Post op-ed said that Trump “used sacred symbols to cloak himself in the mantle of spiritual authority, while espousing positions antithetical to the Bible that he held in his hands. That’s why I drew the line, as did my colleague Archbishop Wilton Gregory when the very next day Mr. and Mrs. Trump made an unannounced visit to the Saint John Paul II National Shrine.” Bishop Gregory remarked of the June 2 photo op: “I find it baffling and reprehensible that any Catholic facility would allow itself to be so egregiously misused and manipulated in a fashion that violates our religious principles, which call us to defend the rights of all people, even those with whom we might disagree.” 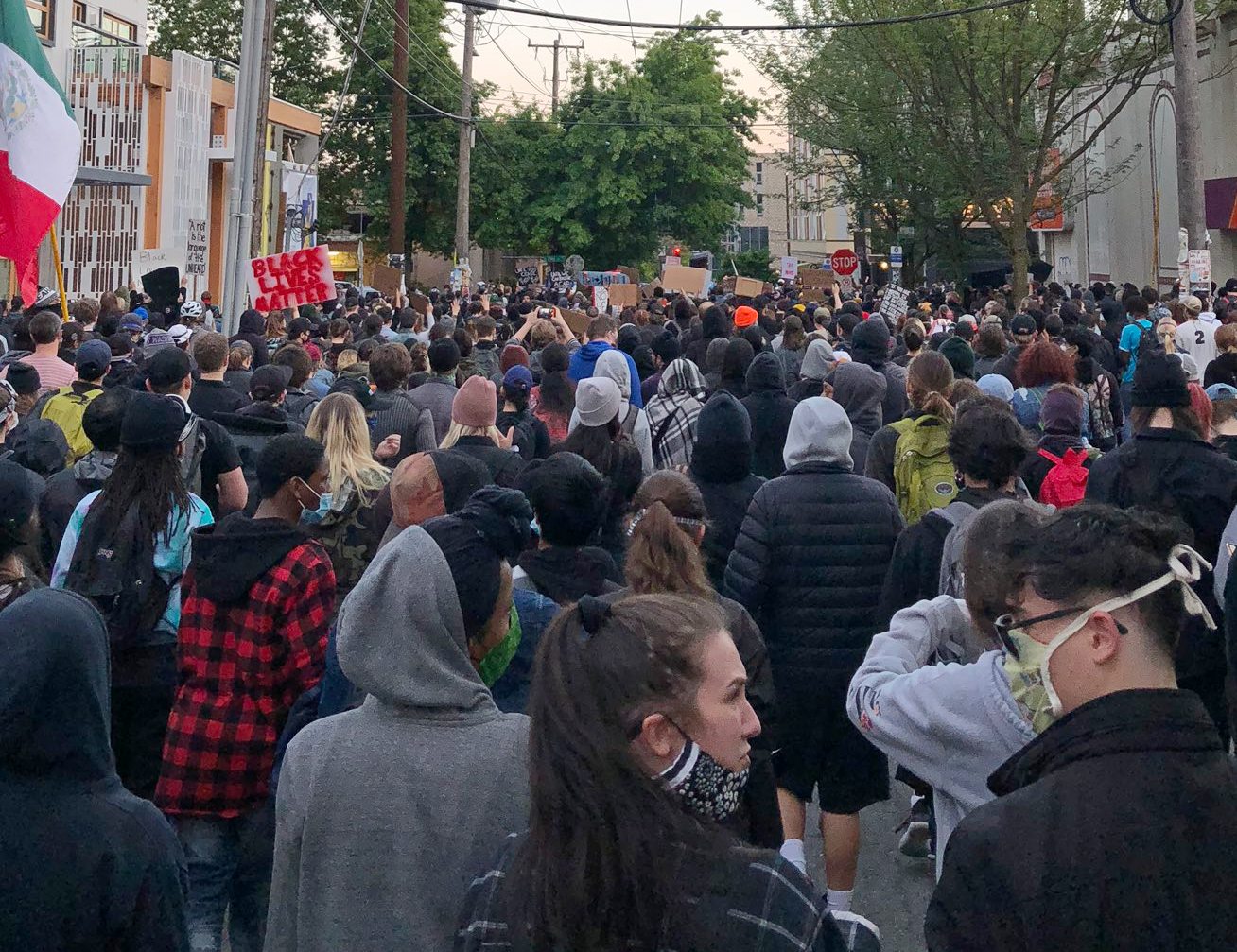 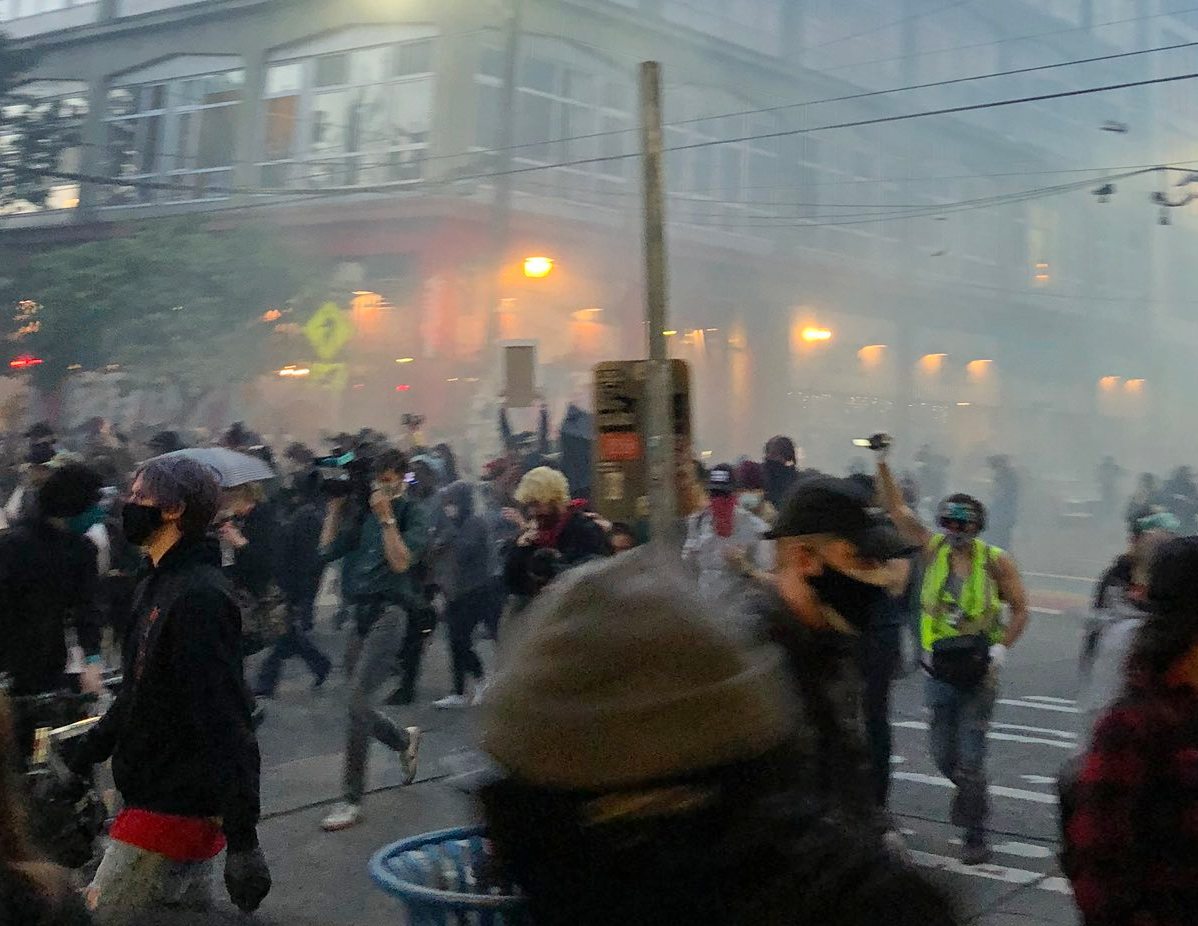 Seattle street before and after police disruption of peaceful protest, June 2, 2020.

Since George Floyd was killed, people from all backgrounds, young and old, have been out in the streets across the U.S. to protest police brutality and impunity, and to demand accountability.

The justness of their cause is underscored by the fact that in many major cities especially, police forces have met these protests with a spirit of revenge, arrogantly sending a clear message that they can and will continue to act with impunity. Protestors have been confronted with arbitrary threats from the police, the military or other security forces. Police response with rare exceptions has been more brutality.

In New York City, police vehicles drove into protesters and one officer pulled a Black protester’s mask down to directly pepper spray him in the face, the ACLU reports.

There are widespread instances of unjustified arrests and use of force by police against protestors, legal observers, medics, journalists and bystanders. These include unprovoked beatings and attacks using rubber-coated metal bullets, tear gas and chemical weapons. People shot with “less lethal” ammunition or otherwise assaulted by police have been seriously injured and hospitalized. Reporters have also suffered at the hands of police, including one reporter who was shot in the eye with a rubber bullet and blinded. A young woman is reported to have died from an asthma attack triggered by tear gas.

Mass detentions are taking place, with some 10,000 people arrested in recent days.

On May 31, curfews had been declared in 25 cities in 16 states, affecting more than 40 million people. Across 34 states, governors are now reported to have called out 43,000 National Guard, with more than 10,000 in Minneapolis alone. This must not pass!

The vicious response of the U.S. president and the whole state security apparatus to the people’s just demands reveal the ugly truth of “the world’s greatest democracy,” for everyone to see. It underscores the need for the peoples to find the ways to empower themselves so as to provide themselves with security that is based on defending the rights of all.

It is important for everyone to take part in actions to demand justice in the wanton killing and persecution of African-Americans, support the courageous working people in the U.S. fighting for their rights, as well as to demand justice for all similar acts of injustice, police violence and impunity in Canada as well as the United States. 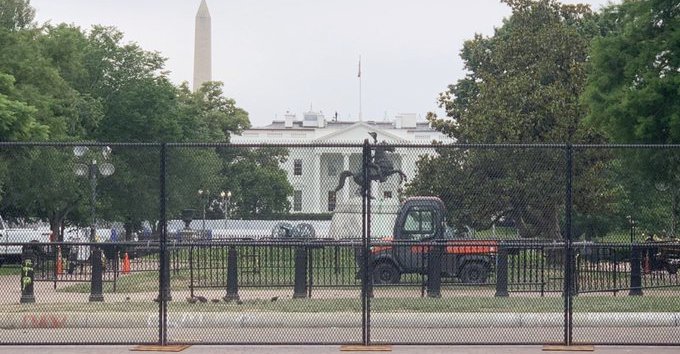 Since June 4, 2020 the White House grounds are surrounded by a tall fence, almost three km long. Commentators have pointed out the irony that the Trump administration, which sough tto build a wall along the border with Mexico to “protect Americans” from “illegal immigrants,” has had to build a wall around the White House to protect President Trump and theillegitimate power that he wields from being held to account by the American people he purports to represent.